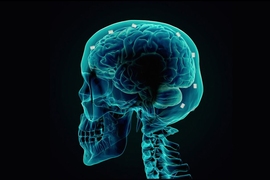 Every year, about 100,000 Americans are diagnosed with brain tumors that have spread from elsewhere in the body. These tumors, known as metastases, are usually treated with surgery followed by chemotherapy, but the cancer often returns.

A new study from MIT, Brigham and Women’s Hospital, and Johns Hopkins University suggests that delivering chemotherapy directly into the brain cavity may offer a better way to treat tumors that have metastasized to the brain.

Testing their new approach in mice, the researchers found that the chemotherapy drug temozolomide (TMZ) was more effective when delivered via tiny capsules implanted inside the skull. This suggests that a similar approach might be more effective in human patients, says Michael Cima, the David H. Koch Professor of Engineering at MIT and a senior author of the study, which appears this week in the Proceedings of the National Academy of Sciences.

“Metastatic disease should be sensitive to chemotherapy, but systemic chemotherapy has not proven effective because it’s not getting to the brain at a high enough dose for a long enough period of time,” says Cima, who is also a member of MIT’s Koch Institute for Integrative Cancer Research. “We’re showing we get much higher degrees of tumor cell death when we deliver the drug locally.”

The paper’s other senior authors are Robert Langer, the David H. Koch Institute Professor at MIT and a member of the Koch Institute, the Institute for Medical Engineering and Science (IMES), and the Department of Chemical Engineering, and Henry Brem, a professor of neurosurgery at Johns Hopkins. The lead author is Urvashi Upadhyay, previously a neurosurgeon at Brigham and Women’s Hospital and now an assistant professor of neurosurgery at the University of Massachusetts Medical School.

Chemotherapy drugs are usually delivered via intravenous injection. To make sure that enough reaches a tumor, very large quantities must be given, often producing side effects.

For a few types of cancer, doctors have developed more targeted approaches. With ovarian cancer, the best results are achieved when drugs are delivered directly into the abdominal cavity. However, this is not widely done because it requires implanting a catheter in the patient for 12 weeks, which is difficult for the patients to tolerate.

“There are already established methods for improving patient care,” Cima says. “There just aren’t good ways to do it.” To overcome these delivery issues, Cima’s lab is working on small implantable devices to deliver drugs for ovarian cancer and bladder disease, as well as brain cancer.

For the new brain study, the researchers delivered chemotherapy drugs via implantable microcapsules made of a biocompatible material called liquid crystal polymer. The capsules are small cylinders with a 1.5-milliliter drug capacity; the drug diffuses out through a small hole. These are experimental devices the researchers selected to test whether the concept of local delivery would work, but they were so effective in this study that Cima says they may end up being the most promising vehicle for potential human clinical trials.

The researchers tested two chemotherapy agents: TMZ, which is a first-line treatment for brain metastasis and gliomas, and doxorubicin, a common treatment for breast cancer, which often metastasizes to the brain.

Working with mice implanted with tumors similar to human brain metastases, the researchers found that TMZ delivered directly to the brain prolonged survival by several days compared with TMZ administered by injection. They also found higher rates of apoptosis, or programmed cell death, in tumor cells near the capsules. However, doxorubicin delivered to the brain did not perform as well as systemic injection of doxorubicin.

As an explanation for that discrepancy, the researchers found that TMZ travels farther from the capsule after release, allowing it to reach more tissue. Doxorubicin appears to be broken down or cleared before it can kill as many cells, Cima says. This could be valuable information in designing future versions of this treatment for brain tumors or other cancers, he adds.

“The properties of the drug molecule have to be taken into account in the design of local therapy that’s effective,” says Cima. “There’s a zone around each one of these devices where it can work, depending on the molecule.”

Michael Lim, an associate professor of neurosurgery at Johns Hopkins, says the new approach seems like a promising way to expand the range of treatments available for brain tumors, which are now limited because it is so difficult to get chemotherapy drugs to cross the blood-brain barrier.

“This could potentially positively impact patients’ lives,” says Lim, who was not involved in the study. “After they have their brain metastases surgically taken out, you could put in these microcapsules, which would kill any remaining cancer cells right then and there.”

Although there are still many hurdles to developing this approach to treat human cancer, Cima says he believes it is worth pursuing because so many cancers, particularly those of the breast and lung, spread to the brain. The researchers are also working on using this approach to precisely deliver drugs to very small regions of the brain, in hopes of developing better treatments for psychiatric and neurodegenerative disorders.

The research was funded by the National Institutes of Health and the Brain Science Foundation.