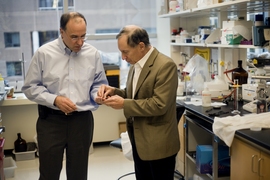 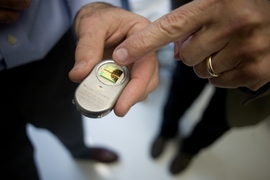 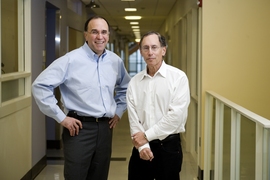 Caption:
This implantable medical device, developed by professors Robert Langer and Michael Cima and colleagues, allows repeated wireless drug delivery in lieu of injections.
Credits:
Photo: M. Scott Brauer
About 15 years ago, MIT professors Robert Langer and Michael Cima had the idea to develop a programmable, wirelessly controlled microchip that would deliver drugs after implantation in a patient’s body. This week, the MIT researchers and scientists from MicroCHIPS Inc. reported that they have successfully used such a chip to administer daily doses of an osteoporosis drug normally given by injection.

The results, published in the Feb. 16 online edition of Science Translational Medicine, represent the first successful test of such a device and could help usher in a new era of telemedicine — delivering health care over a distance, Langer says.

“You could literally have a pharmacy on a chip,” says Langer, the David H. Koch Institute Professor at MIT. “You can do remote control delivery, you can do pulsatile drug delivery, and you can deliver multiple drugs.”

In the new study, funded and overseen by MicroCHIPS, scientists used the programmable implants to deliver an osteoporosis drug called teriparatide to seven women aged 65 to 70. The study found that the device delivered dosages comparable to injections, and there were no adverse side effects.

These programmable chips could dramatically change treatment not only for osteoporosis, but also for many other diseases, including cancer and multiple sclerosis. “Patients with chronic diseases, regular pain-management needs or other conditions that require frequent or daily injections could benefit from this technology,” says Robert Farra, president and chief operating officer at MicroCHIPS and lead author of the paper.

“Compliance is very important in a lot of drug regimens, and it can be very difficult to get patients to accept a drug regimen where they have to give themselves injections,” says Cima, the David H. Koch Professor of Engineering at MIT. “This avoids the compliance issue completely, and points to a future where you have fully automated drug regimens.”

The MIT research team started working on the implantable chip in the mid-1990s. John Santini, then a University of Michigan undergraduate visiting MIT, took it on as a summer project under the direction of Cima and Langer. Santini, who later returned to MIT as a graduate student to continue the project, is also an author of the new paper.

In 1999, the MIT team published its initial findings in Nature, and MicroCHIPS was founded and licensed the microchip technology from MIT. The company refined the chips, including adding a hermetic seal and a release system that works reliably in living tissue. Teriparatide is a polypeptide and therefore much less chemically stable than small-molecule drugs, so sealing it hermetically to preserve it was an important achievement, Langer says.

The human clinical trial began in Denmark in January 2011. Chips were implanted during a 30-minute procedure at a doctor’s office using local anesthetic, and remained in the patients for four months. The implants proved safe, and patients reported they often forgot they even had the implant, Cima says. 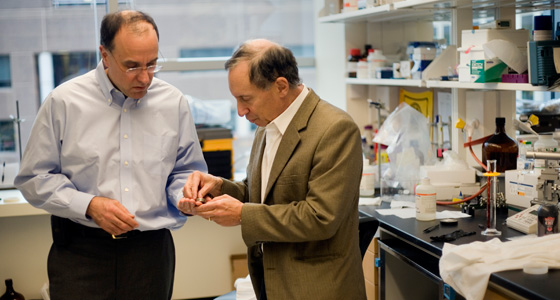 Chips used in the study stored 20 doses of teriparatide, individually sealed in tiny reservoirs about the size of a pinprick. The reservoirs are capped with a thin layer of platinum and titanium that melts when a small electrical current is applied, releasing the drug inside. MicroCHIPS is now working on developing implants that can carry hundreds of drug doses per chip.

Because the chips are programmable, dosages can be scheduled in advance or triggered remotely by radio communication over a special frequency called Medical Implant Communication Service (MICS). Current versions work over a distance of a few inches, but researchers plan to extend that range.

In the Science Translational Medicine study, the researchers measured bone formation in osteoporosis patients with the implants, and found that it was similar to that seen in patients receiving daily injections of teriparatide. Another notable result is that the dosages given by implant had less variation than those given by injection.

“It’s very rare to find a paper that is really a breakthrough in technology,” says Brem, who was not part of the research team. “It fulfills the promise of polymer drug delivery and the incredible sophistication of microchip capabilities.”

Once a version of the implant that can carry a larger number of doses is ready, MicroCHIPS plans to seek approval for further clinical trials, Farra says. The company has also developed a sensor that can monitor glucose levels. Eventually such sensors could be combined with chips that contain drug reservoirs, creating a chip that can adapt drug treatments in response to the patient’s condition.

Boston Globe reporter Scott Kirsner explores the history of MicrChips, an MIT startup that has made headlines recently with the news that the company is developing a remote-controlled, implantable contraceptive chip.

Guardian reporter Oliver Wainwright reports on the new remote-controlled contraceptive chip developed by MIT researchers. “Someone across the room cannot reprogramme your implant,” says Dr. Robert Farra. “Communication with the implant has to occur at skin contact-level distance. Then we have secure encryption. That prevents someone from trying to interpret or intervene between the communications.”

“The concept was conceived two years ago when Bill Gates visited Robert Langer’s MIT lab,” writes Sarah Gray for Salon about a new implantable, contraceptive microchip. The chip can be controlled remotely and lasts for 16 years.

BBC News reporter Dave Lee writes that MIT researchers have developed an implantable contraceptive chip that can be controlled via remote control. "The ability to turn the device on and off provides a certain convenience factor for those who are planning their family," explains Robert Farra.

“We may be just years away from the longest-lasting and most hassle-free contraceptive ever invented,” writes Eliana Dockterman for Time about new implantable contraception being developed by MIT startup MicroCHIPS.

Rachel Raczka writes for Boston.com about MIT startup MicroCHIPS’ new remote-controlled contraceptive device. The implantable microchip releases levonorgestrel, an active ingredient in certain forms of oral contraception, and can be turned on or off with the flip of a button.