Expanding the pipeline to graduate school 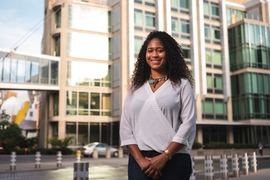 ↓ Download Image
Caption: PhD student Tsehai Grell believes the variety of MIT students’ experiences and perspectives is one of the Institute’s greatest qualities. “When you don’t have diversity of thought and experiences, you are missing out on a number of problems and potential solutions, especially in the research lab,” she says. 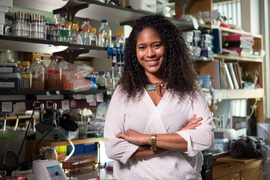 ↓ Download Image
Caption: PhD student Tsehai Grell believes the variety of MIT students’ experiences and perspectives is one of the Institute’s greatest qualities. “When you don’t have diversity of thought and experiences, you are missing out on a number of problems and potential solutions, especially in the research lab,” she says.

Caption:
PhD student Tsehai Grell believes the variety of MIT students’ experiences and perspectives is one of the Institute’s greatest qualities. “When you don’t have diversity of thought and experiences, you are missing out on a number of problems and potential solutions, especially in the research lab,” she says.

Tsehai Grell grew up in a small island nation in the Caribbean called the Commonwealth of Dominica. Known as “the nature island,” Dominica features black sand beaches, rolling mountains, tropical green foliage, and a close-knit community.

“I grew up there and I wouldn’t trade it for the world. It’s a warm, friendly culture. You cannot walk into a room without greeting everyone, even if you don’t know them. Even on the street you say hello,” says Grell, a rising sixth year PhD candidate in the Department of Chemistry.

Many people in this supportive environment helped launch Grell on her path to academic success. “It wasn’t just my family; my whole community wanted to see me succeed,” she recalls. “They were equally as proud of me as my parents were, because they had a hand in raising me to become the person that I am today.”

Grell has carried that “it takes a village” philosophy with her to MIT, where in addition to conducting research at the interface of chemistry and biology, she has been active in a number of efforts that encourage underrepresented minorities to pursue graduate studies in STEM fields.

MIT’s enrollment data attests to the importance of these initiatives. For example, as of fall 2016, black and Latino students represented roughly 21 percent of MIT’s undergraduate class but only about 7 percent of the graduate class.

Grell believes the variety of MIT students’ experiences and perspectives is one of the Institute’s greatest qualities. “When you don’t have diversity of thought and experiences, you are missing out on a number of problems and potential solutions, especially in the research lab,” she says.

Grell works in the lab of professor of chemistry and biology Catherine Drennan, using X-ray crystallography techniques to look at the molecular structure of enzymes and learn about how they function.

Her research is focused on metalloenzymes, which contain metal ions at their core. The metalloenzymes that Grell works with are able to manipulate highly reactive free-radical chemistry to accomplish reactions that require large amounts of energy.

“[Free radicals] are very, very reactive; they’re in a war zone and react with everything,” she explains. “But the enzymes have found a way to contain this reactivity to within the active site, to make crazy, difficult reactions happen to their benefit.”

One of the metalloenzymes Grell is studying is found in bacteria, where it can synthesize antifungal compounds. Another may have an important role in modifying tRNA molecules, which participate in producing the body’s proteins.

X-ray crystallography is a long and arduous process, according to Grell. The first challenge is to get the targeted protein purified, and then the protein must be crystallized — which can take as few as 12 hours and as many as 10 years. The next hurdle is to solve the protein’s structure, and then the researchers must determine whether the final structure contains the information they were searching for. They may wish to capture, for example, a view of the protein while it’s interacting with its substrate. If any of these challenges are not accomplished, the researcher must start over.

“Yeah, it’s a lot. You learn to appreciate the process and how long it takes. This requires a lot of willpower. Our lab says it builds character,” Grell says.

Outside of lab, Grell participates in multiple programs that aim to make MIT more inclusive and welcoming at the graduate level, particularly to underrepresented minorities.

She served as treasurer for the Black Graduate Student Association, or BGSA, around the time when the Black Lives Matter movement was developing. She and other BGSA leaders helped put together panels and other events to address racial inequalities, and in 2015 the BGSA and the Black Students’ Union came together to present recommendations to MIT’s senior administration.

Grell is also dedicated to encouraging underrepresented minorities who might be interested in graduate study at MIT. She has volunteered for several programs, including Dow-MIT Access and MIT CONVERGE, which bring talented undergraduates of color to a weekend on campus to explore prospects for graduate education. Grell says she enjoys interacting with students and getting them excited about chemistry research.

Grell did similar work as a program assistant with the MIT Summer Research Program (MSRP), which gives approximately 40 students with a broad array of backgrounds the opportunity to spend the summer at MIT. Participants conduct research and take part in other activities aimed at preparing them for graduate school.

“[MSRP] gave me that access to the MIT community, where you build lasting relationships with the staff and faculty. It shows you that you can thrive in a research environment where you are constantly being pushed out of your comfort zone,” says Grell, who participated in the program when she was an undergraduate at Morgan State University.

As a program assistant, she helped read applications and served as an advisor to 10 students. She was their resource when there was a problem in lab, for example, or if they were worried about their personal statement for graduate school applications. So far, three students she has mentored have started graduate school at MIT.

Grell is also part of an organization started by a fellow graduate student, called i-Trek, which stands for “I Turn Research into Empowerment and Knowledge.” The program offers nontraditional research opportunities to underserved and underrepresented minority students in community colleges and small liberal arts colleges that don’t have the capacity to expose such students to scientific research. She also served as treasurer and later co-president for an MIT club called the Academy of Courageous Minorities in Engineering, or ACME.

Grell can identify with the prospective students she welcomes when they visit MIT.

“I think that’s another reason why I love getting involved in [programs that advise undergraduates], because I felt it was so essential for me,” she says. “Entering undergrad, I never thought, I’m going to grad school at MIT. It wasn’t something that was even on my radar until people at MSU and MIT put it on my radar, and when I got here it was such a welcoming environment.”

She adds: “It’s always really great when you can encourage students who have the grades but just don’t have that someone to say ‘you can do that’ and ‘you need that.’ You need someone to say, ‘this is definitely a possibility for you to consider. Don’t let anybody tell you you can’t do it.’”