Exploring the world and filming the unfamiliar 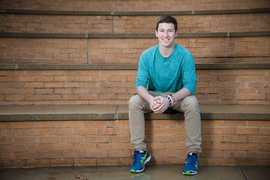 ↓ Download Image
Caption: “In the future I want to be an innovator of the visual arts, with respect to technology. To become a technical artist, if you will,” senior Evan Denmark says. While interning at Pixar Animation Studios last summer, Denmark built tools for modeling artists to use to when creating animations.

Caption:
“In the future I want to be an innovator of the visual arts, with respect to technology. To become a technical artist, if you will,” senior Evan Denmark says. While interning at Pixar Animation Studios last summer, Denmark built tools for modeling artists to use to when creating animations.

Evan Denmark acted in a lot of high school productions. Looking back, the biggest challenge of his theater career in Sandwich, Massachusetts, wasn’t performing in front of an audience — it was sticking to his scripted lines. He caught himself improvising constantly. Now, as the president of Roadkill Buffet, MIT’s premier improv comedy troupe, the MIT senior has hit his stride.

“Roadkill Buffet is the greatest thing that I have done at MIT,” says Denmark. “It has taught me that you have to be ready for anything. You have to be able to take any suggestion and turn it into something funny and entertaining. And it’s forced me to really think on my feet, all the time. That has kind of transitioned into my life mentality.”

A technique critical for Denmark when he performs improv is “yes, and-ing” — agreeing with and building on the suggestion of his improv partner. “That is kind of a life thing too, just ‘yes and __.’ And trust your partners. Trust people around you to support you, and vice versa,” he explains. Denmark takes this approach with creative projects, research, and international travel, through which he exposes himself to new experiences and often documents them on camera.

“In the future I want to be an innovator of the visual arts, with respect to technology. To become a technical artist, if you will,” Denmark says. While interning at Pixar Animation Studios last summer, Denmark built tools for modeling artists to use to when creating animations.

“So I wasn’t directly making each frame the movie, but I was allowing for the artist to make the features that you see in the movie. I like to do things like that. I have always liked to draw, and I have always liked to explore in the visual arts. Combining that with computer science is a really powerful, cool, tool,” Denmark says.

Denmark also spends a lot of time building tools at MIT. As part of the Undergraduate Research Opportunities Program (UROP) with Associate Professor Frédo Durand of the Computer Science and Artificial Intelligence Laboratory, Denmark built a tool for detecting the angle of someone’s face, which could be used, for example, in portrait photography.

Depending on the shape of a room or environment, and the pose of a subject, a camera flash can bounce off the surroundings and produce unanticipated shadows, often making for a poor picture. Professional photographers combat this with intuition, pointing their flash a certain way for the light to “bounce” predictably.

Denmark’s tool was part of a larger effort to discern the best lighting for shooting portraits by understanding the space, finding the face, and automatically pointing the bounce flash. One part of the team built a sensor that could detect the geometry of the room. Denmark focused on building a tool that could detect facial orientation. “When you look around the room we can see exactly where your face is looking, so we can point the bounce flash in the correct direction,” he explains.

The project was presented at the 2016 SIGGRAPH conference for computational photography and computer graphics. “Maybe in twenty years, when you have your camera, you could press a button and it would automatically point your flash in a certain direction. Similar to how now on a camera when you hold it down, it autofocuses,” he speculates.

When interning at the Woods Hole Oceanographic Institution the summer after his freshman year, Denmark worked with fellow interns from around the world. After realizing that he had never actually left the Eastern time zone, he came back to MIT determined to travel, and to travel somewhere challenging. He decided to go to India. “I was like, ‘put me out of my comfort zone and make me feel uncomfortable. Challenge me. Let’s go,’” he says. “I think being uncomfortable is pretty exciting.”

Working with the MIT-India program in MIT’s International Science and Technology Inititatives (MISTI), Denmark interned at Infosys, a technical consulting company in Bangalore, the following summer. There he developed a tool for reading text from very poor-quality images.

He also launched his YouTube channel, Grape Soda Pin, a name that comes from one of Denmark’s favorite Pixar movies, “Up.” In the movie, one character gives her more timid husband the cap of a grape soda bottle, mounted on a safety pin, inviting him to join her on future travels and declaring “Adventure is out there!”

“I tried to structure each video on a certain aspect. One was about food, one was about customs in India, one was about an adventure I had the past weekend,” Denmark says about his YouTube videos. “I wanted to focus it on things that were different about India than the United States, in not just a silly way.”

For his last Independent Activities Period, Denmark pitched a plan to combine travel with video-making. He returned to Jordan and traveled to Israel to film promotional videos for the Global Teaching Labs. He then journeyed to Nepal to film a short documentary about MIT alumnus Ram Rijal ’12, who founded the Bloom Nepal School in 2013. The school was devastated by the 2015 earthquake and is still in the process of rebuilding.

Denmark met Rijal over Skype several weeks before he left the United States, and began planning some of the aspects he wanted to capture in his video. He spent his first several days in Nepal without pulling out a camera, observing the school, the teachers, and the students. He interviewed and filmed members of the school community, and felt his interview style loosening up over the course of the trip.

“I really learned how to manage and create my own project on a global scale. It is amazing that two years ago, if you asked me to do that, I would have had no idea what to do. It’s amazing what MISTI can do in that sense. At the same time, I became a much better director and filmmaker,” Denmark says.

This semester, Denmark is taking a new D-Lab class, EC.750/EC.785 (Humanitarian Innovation), which focuses on places in the world where humanitarian aid is distributed, such as Syrian refugee camps, and working with people affected by war, conflict, and natural disasters to use innovation and design to improve their lives.

Denmark credits MISTI with opening his eyes to perspectives and problems outside of his experience. “If I didn’t have MISTI, I wouldn’t be taking that class. It has allowed me to see the various problems of the world, a very small fraction of those problems, and now want to be a part of them,” he says. “MISTI has changed my life, really.”

Denmark will return to work at Pixar after he graduates in May. “I am very excited to go back to be in an environment that is really a combination art and tech,” he says. “It’s a pretty unique place. Similar to MIT, at Pixar people are incredibly diverse in the sense of their skills. They do a lot of really cool, different things.”