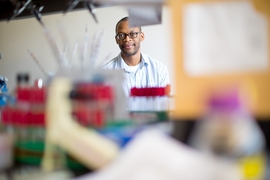 ↓ Download Image
Caption: A team of MIT biological engineers has developed a method to measure levels of the iron-containing protein heme inside the malaria parasite. “One of our long-term goals is ultimately being able to tie insights from these studies back to thinking about drug discovery and targeting pathways that regulate heme,” says Jacquin Niles, an MIT associate professor of biological engineering. 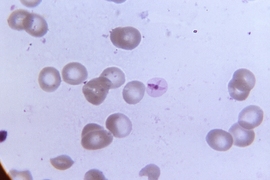 ↓ Download Image
Caption: The Malaria parasite. A team of MIT biological engineers has developed a method to measure levels of the iron-containing protein heme inside the malaria parasite.

Caption:
A team of MIT biological engineers has developed a method to measure levels of the iron-containing protein heme inside the malaria parasite. “One of our long-term goals is ultimately being able to tie insights from these studies back to thinking about drug discovery and targeting pathways that regulate heme,” says Jacquin Niles, an MIT associate professor of biological engineering.
Credits:
Photo: Bryce Vickmark

Caption:
The Malaria parasite. A team of MIT biological engineers has developed a method to measure levels of the iron-containing protein heme inside the malaria parasite.
Credits:
Image: CDC/Neva Gleason

The iron-containing molecule heme is necessary for life. Cells require heme to perform the chemical reactions that produce energy, among other critical tasks.

Scientists who study the malaria parasite are particularly interested in heme because many malaria drugs interact with this molecule, also known as a cofactor. However, until now researchers have lacked good ways to measure heme levels inside the parasite.

A team of MIT biological engineers has developed a method to do just that. Using a genetically encoded fluorescent protein that interacts with heme, the researchers can image heme within cells and measure how much is present. This could eventually help scientists develop better drugs to combat malaria, says Jacquin Niles, an MIT associate professor of biological engineering.

“One of our long-term goals is to use insights from these studies to understand the pathways that regulate heme and to target these for antimalarial drug discovery purposes,” says Niles, the senior author of the study, which appears in the Proceedings of the National Academy of Sciences the week of Feb. 27.

James Abshire, a recent MIT PhD recipient, is the paper’s lead author. Other authors are former postdocs Christopher Rowlands and Suresh Ganesan, and professor of biological and mechanical engineering Peter So.

Heme is found in nearly all cells and is especially plentiful in red blood cells, which use it to carry oxygen. However, cells need to keep tight control over the cofactor because it is reactive and can damage other molecules in cells. Heme is usually embedded within other proteins that carefully control its activity. If heme levels get too high, the molecule is either broken down by enzymes or put into a storage compartment where it can’t cause cellular damage.

Niles was motivated to explore how the parasite Plasmodium falciparum controls heme levels because of the known interactions between this cofactor and the antimalarial drugs known as quinolones, which include chloroquine. Until recently, when the parasite became resistant to chloroquine, this drug was used widely to treat malaria.

“Many successful antimalarial compounds seem to exert their antimalarial effect through interacting with or somehow disrupting heme homeostasis within the parasite,” Niles says.

As he started to think about investigating those interactions, he realized that not much was known about how the parasite controls its heme levels. This is a particularly important task for these organisms because they spend part of their life cycle inside red blood cells, where they take up and degrade substantial quantities of hemoglobin and release heme in the process.

“The first step was to figure out how much labile heme parasites maintain in their cytosolic compartment as they develop within red blood cells, and how those levels might change with certain environmental perturbations — such as exposure to heme-interacting antimalarial drugs,” Niles says.

To achieve this, Niles and his colleagues developed a heme-sensing protein whose fluorescence dims when it binds to heme. This sensor protein can be expressed in the parasite, allowing the researchers to measure heme levels in parasites by measuring changes in fluorescence.

Daniel Goldberg, co-director of the Division of Infectious Diseases at the Washington University School of Medicine, described this as an “elegant” approach to sensing heme.

“It works beautifully and allows measurement of cytoplasmic heme in malaria parasites. This is crucial for understanding parasite metabolism and antimalarial drug mechanism,” says Goldberg, who was not involved in the research.

Using this sensor, the researchers found that malaria parasites maintain higher labile heme levels than previously estimated. Most scientists studying the parasite had assumed that heme levels would be lower due to the cofactor’s potential to damage cells.

“At this time, we don’t really know the physiological role of these observed labile heme levels in the parasite,” he says. “But what this might do is set the parasite up to be particularly vulnerable to antimalarial drugs that interact with heme.”

One possibility is that drugs such as chloroquine somehow increase heme levels to the point where damage to parts of the cell (such as the cell membrane) cause parasite death. Artemisinin, another potent antimalarial drug, also seems to be dependent on heme within the parasite for its effectiveness. Thus, finding out more about the role of heme in causing parasite toxicity could help researchers develop new drugs that exploit these mechanisms.

“This could provide insights into alternate ways by which we can disrupt heme homeostasis for therapeutic purposes — ideally in a way that circumvents the mechanisms of resistance that parasites have developed to drugs like chloroquine,” Niles says.

Once widely used, chloroquine is now mostly ineffective due to widespread resistance. Artemesinin-based combinations are now standard treatment, but resistance is emerging in parts of Southeast Asia, according to the Centers for Disease Control and Prevention.

In future studies, Niles plans to adapt the heme sensors so they can be targeted to different compartments of the cell to measure how heme is distributed within the parasite. He also plans to study the sources of heme — whether parasites synthesize it on their own or scavenge most of it from red blood cells — and how those processes might be affected as the parasite moves into later stages of its life cycle.