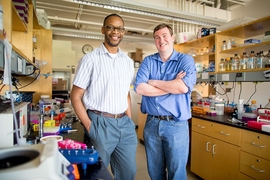 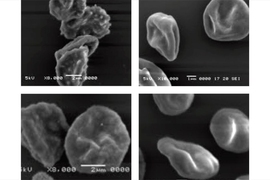 ↓ Download Image
Caption: In the red blood cells on the right, MIT engineers used CRISPR to knock out the gene for a malarial protein called kahrp. This protein is present in the cells on the left, giving them a distinctive knobby appearance.
Credits: Photo courtesy of the researchers 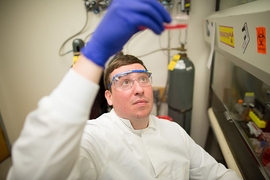 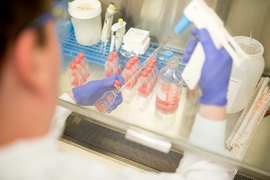 Plasmodium falciparum, the parasite that causes malaria, has proven notoriously resistant to scientists’ efforts to study its genetics. It can take up to a year to determine the function of a single gene, which has slowed efforts to develop new, more targeted drugs and vaccines.

MIT biological engineers have now demonstrated that a new genome-editing technique, called CRISPR, can disrupt a single parasite gene with a success rate of up to 100 percent — in a matter of weeks. This approach could enable much more rapid gene analysis and boost drug-development efforts, says Jacquin Niles, an associate professor of biological engineering at MIT.

“Even though we’ve sequenced the entire genome of Plasmodium falciparum, half of it still remains functionally uncharacterized. That’s about 2,500 genes that if only we knew what they did, we could think about novel therapeutics, whether it’s drugs or vaccines,” says Niles, the senior author of a paper describing the technique in the Aug. 10 online edition of Nature Methods.

Plasmodium falciparum, a blood-borne parasite carried by mosquitoes, is responsible for most of the estimated 219 million cases, and 655,000 deaths, from malaria per year. Treatments include chloroquine and artemisin, but the parasite is becoming more resistant to these drugs.

There is an urgent need to develop new drugs, but potential genetic targets are hard to identify. In animals such as mice, it is fairly routine to study gene functions by deleting a target gene or replacing it with an artificial piece of DNA. However, in Plasmodium falciparum, this approach can take up to a year because it relies on homologous recombination, a type of genetic swapping that cells use to repair broken DNA strands. This occurs very rarely in the genome of the malaria parasite.

“You have to rely on this really inefficient process that occurs only if you have spontaneous DNA strand breaks that happen to fall within your region of interest,” Niles says.

Using this time-consuming approach, scientists have been able to identify functions for some of the genes necessary for the parasite to invade red blood cells, as well as some of the genes required for the parasite to later erupt from blood cells. More recently, researchers have successfully used enzymes called zinc finger nucleases to cut out specific genes, but this approach is costly because it requires a new nuclease to be designed for each gene target.

CRISPR, a gene-editing system devised within the past several years, exploits a set of bacterial proteins that protect microbes from viral infection. The system includes a DNA-cutting enzyme, Cas9, bound to a short RNA guide strand that is programmed to bind to a specific genome sequence, telling Cas9 where to make its cut. This approach allows scientists to target and delete any gene by simply changing the RNA guide strand sequence.

In the red blood cells on the right, MIT engineers used CRISPR to knock out the gene for a malarial protein called kahrp. This protein is present in the cells on the left, giving them a distinctive knobby appearance.
Photo courtesy of the researchers

As soon as researchers successfully demonstrated that this system could work in cells other than bacteria, Niles started to think about using it to manipulate Plasmodium falciparum. To test this approach, he and his colleagues tried using CRISPR to disrupt two genes, kahrp and eba-175, that had previously been knocked out in malaria using traditional approaches.

The kahrp gene produces a protein that causes red blood cells, which are normally smooth, to develop a knobby appearance when infected with malaria. Niles’ team was able to disrupt this gene in 100 percent of parasites treated with the CRISPR system; red blood cells infected by those parasites remained smooth.

With eba-175, which codes for a protein that binds to red blood cell receptors and helps the parasite get into the cells, the researchers disrupted this gene in 50 to 80 percent of parasites manipulated with the CRISPR system. “We consider this to be a win,” Niles says. “Compared to the efficiency with which P. falciparum genetics have been done in the past, even 50 percent is pretty substantial.”

For both targets, the researchers demonstrated that they could insert a gene for the protein luciferase, which emits light, in addition to turning off the existing genes.

“The general concept of using the CRISPR/Cas9 system to edit the genome of the malaria parasite is significant because we’ve struggled with the technical aspects of doing these genetic experiments,” says Kirk Deitsch, a professor of microbiology and immunology at Cornell University who was not part of the research team. “Now based on CRISPR, we can modify genes in a shorter timeframe and with greatly enhanced precision.”

Now that CRISPR technology has been validated in Plasmodium falciparum, Niles expects that many scientists will adopt it for genetic studies of the parasite. Such efforts could reveal more about how the parasite invades red blood cells and replicates inside cells, which could generate new drug and vaccine targets.

“I think the impact could be quite huge,” Niles says. “It lowers the barrier to really being more imaginative in terms of how we do experiments and the kinds of questions that we can ask.”