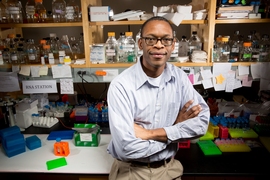 ↓ Download Image
Caption: “We can, through engineering, convert this organism’s parasitic lifestyle into a more symbiotic relationship,” Jacquin Niles says about the malaria parasite.

Caption:
“We can, through engineering, convert this organism’s parasitic lifestyle into a more symbiotic relationship,” Jacquin Niles says about the malaria parasite.
Credits:
Photo: Bryce Vickmark

What if a centuries-old foe could become a workhorse for drug delivery in the future? Jacquin Niles, an associate professor of biological engineering at MIT, sees potential for such a transformation in what others might consider an unlikely subject: the malaria parasite.

Niles’ lab works mainly on eliminating malaria as a disease, but he is taking a radically different approach to the parasite with his project to re-engineer the organism as a vehicle for drug delivery. The project is funded by an Amar G. Bose Grant, which supports high-risk, high-reward research.

“It’s the kind of proposal I like,” Niles says. “It lets you be creative, imaginative, and free in your thinking without the constraint of whether a reviewer would consider this too risky or impossible.”

Niles was born in the U.S. Virgin Islands and grew up in the British territory of Anguilla. In high school, he was fascinated by biology, chemistry, and the interface between the two — biochemistry.

“I liked thinking about living systems, but I also liked understanding how they work and how chemistry drives an understanding of biology,” Niles says. One of his biology courses covered tropical diseases like helminthic worm infections, dengue, and malaria.

“It struck me as an area of immense importance, because there are a lot of people who are affected by these diseases, living in the developing world without access to treatment or an invested research structure focused on these diseases,” Niles says. He was also fascinated by the disease processes. “They all have these very intricate life-cycles; each organism has its unique way of reproducing and doing so across different hosts and vectors,” he says.

As an undergraduate in chemistry at MIT, Niles began doing research through an Undergraduate Research Opportunities Program (UROP) project on the enzyme nitrogenase. His interest in chemistry, biology, and medicine led him to pursue an MD/PhD at Harvard University; for his PhD, he conducted research at MIT with Steven Tannenbaum, professor of biological engineering, in oxidative DNA damage related to cancer. After completing postdoctoral work at the University of California at Berkeley with Professor Michael Marletta, Niles returned to MIT to apply his skills to one of the diseases that had always fascinated him.

“It all came full circle, coming back to the initial thing that grabbed my interest in high school: How do we integrate knowledge from different disciplines to think about new ways of studying these otherwise intractable systems?” Niles says.

A feature, not a bug

Niles’ lab focuses on understanding the basic biology of the malaria parasite, to prevent and treat the illness it causes. “That’s been the major thrust of the lab since we started — how can we defeat malaria the disease?” Niles says. “There are too many people who are affected by and die as a result of it, and it’s important that we eliminate malaria as a disease globally.”

As Niles delved deeper into the biology of the parasite, he began to ponder another side of the organism. Around half a million people die each year from malaria — but some 200 million that are infected survive. Many experience no symptoms. These people are clinically immune, meaning they carry the parasite, but show no overt disease symptoms. This makes it hard to identify carriers of the disease, as the malaria parasite survives in the bloodstream at some level, but the carrier is unaware.

“That’s a problem for eliminating the disease, but if you flip that around to think about the organism as a potential therapeutic vehicle, it becomes an interesting ‘feature’ rather than a ‘bug’,” Niles says.

What Niles realized is that such an organism — one that survives in the human bloodstream over the long term with no adverse health effects — could be an ideal vehicle for producing and delivering medicine directly into a person’s bloodstream.

Engineering existing organisms to deliver drugs is not a new idea. Researchers are already genetically modifying microbes in the gut to produce molecules the body needs. But some drugs need to be delivered through the bloodstream and can’t get there from the gut — they get broken down in the digestive environment, or they aren’t efficiently absorbed into the bloodstream.

Niles’ proposal is, to his knowledge, the first aiming to re-engineer the malaria parasite into a medical tool and provide a novel way to deliver therapeutic drugs: The organism that now infects could one day cure.

“We can, through engineering, convert this organism’s parasitic lifestyle into a more symbiotic relationship,” Niles says.

With the support of the Bose Grant, Niles aims to develop his idea over the next three years. The first step is to systematically determine which molecules the malaria organism can be engineered to create. To do this, Niles and his colleagues will be inserting into the organism’s DNA gene sequences that are known to code for specific molecules.

After determining the range of molecules that the organism can create, the researchers will need to hone their controls over the creation and delivery of the drugs. “What will be harder is thinking about ways in which we can control how and when these molecules are made,” Niles says. “Can we have the organism sense when a therapeutic is needed by the host and respond appropriately to ensure that the right amount of it is made and delivered at the right time?”

If those controls can be calibrated, the results could one day make treatments more effective and patients’ lives easier.

“The long-term goal would be to have these engineered organisms serve as bioreactors that can self-sustain and self-regulate within the bloodstream in conjunction with natural immune pressure,” Niles says. “Then you can imagine that rather than having to go every month for an injection of replacement enzyme, for example, that you could go for significantly longer periods without needing another medical intervention.”

Incorporating a malaria-derived organism into a medical treatment comes with an interesting set of challenges as well. Researchers will need to ensure that the treatment comes with zero risk of causing malaria and zero potential to transmit disease, via the natural mosquito vector, for example.

“An important part of this will be to cripple the parasite with respect to its ability to be naturally transmitted,” Niles says. He has reason to believe this is possible: “We know which genes we need to irreversibly delete so that these organisms could never be transferred by mosquitoes to another person.”

Niles foresees bumps in the road — as he says, “this organism never ceases to surprise me,” — but he’s excited to pursue an out-of-the-box idea that has the potential to improve human health.

“It’s the kind of idea you have and then think about on and off, but it’s hard to sit down and write a proposal because it seems too ‘out there,’” Niles says. “In many ways, I felt like the Bose proposal was an outlet for the accumulation of invested thinking about this project. When the call came around, I thought, ‘Maybe this is the moment.’”