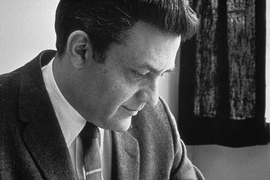 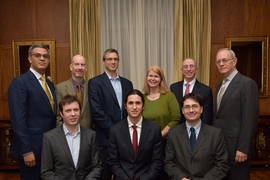 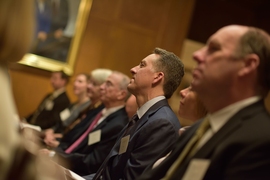 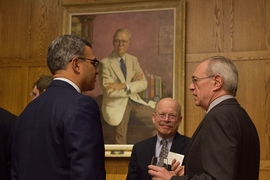 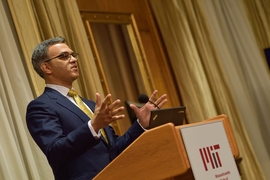 ↓ Download Image
Caption: “Any truly groundbreaking research will likely be found to be risky, inappropriate, or unrealistic by many of the established practitioners in the field,” Vanu Bose says.
Credits: Photo: John Gillooly 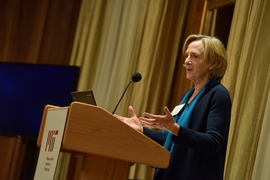 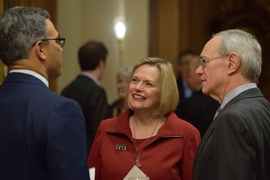 Caption:
“Any truly groundbreaking research will likely be found to be risky, inappropriate, or unrealistic by many of the established practitioners in the field,” Vanu Bose says.
Credits:
Photo: John Gillooly

Solar cells made from coal, smart nanoparticles that work with bacteria to fight cancer, and an effort to enhance human cognition by stimulating brain waves are just a few examples of the high-risk, high-impact projects funded by the first round of Prof. Amar G. Bose Research Grants.

As a scientist, Bose — a longtime member of the MIT faculty, and the founder of Bose Corporation — was driven to explore new and controversial research areas, and strongly believed in pursuing projects that many others felt were impossible. The grant program named for him embraces that philosophy, investing in the development of visionary researchers and giving them the opportunity to explore areas outside their field of expertise.

“Any truly groundbreaking research will likely be found to be risky, inappropriate, or unrealistic by many of the established practitioners in the field,” says Vanu Bose ’88, SM ’94, PhD ’99, son of Amar Bose, who died last year. “Historically, many of the innovative and groundbreaking advances in a field have come from people outside of, or on the periphery of, the particular field, since they are often able to bring a fresh perspective to the problems and ideas.”

Such projects are often less likely to be funded by traditional funding sources. The Bose grant program seeks out this type of visionary research, offering up to $500,000 over three years. The first five grant recipients were selected from more than 100 MIT faculty members who applied last year, and were evaluated according to the likelihood that the research could not be funded through traditional means; the intellectual adventurousness of the research; and the prospect of the research having a significant influence on the researcher’s career.

In a project she describes as “synthetic biology meets nanotechnology,” Sangeeta Bhatia is working to create bacterial-derived “minicells” as programmable therapeutic vehicles that can be remotely triggered by “smart” nanoparticles.

Under this plan, researchers would use targeted nanomaterials that home to tumors to trigger bacterial circuits that would locally deliver toxic cancer drugs, sparing healthy tissues. In one example, Bhatia is using heat generated by gold nanorods to trigger a programmed genetic circuit that produces peptides that cause cell death.

This high-risk project, which combines two disparate fields, has the potential to transform cancer therapy, but funding such a project through traditional means would have been extremely challenging, says Bhatia, the John and Dorothy Wilson Professor of Health Sciences and Technology and Electrical Engineering and Computer Science, and a member of the Koch Institute for Integrative Cancer Research.

“The Bose grant has allowed us to explore how nanotechnology may synergize with the field of synthetic biology in an unusually open-ended way,” Bhatia says. “Of course, we are ultimately interested in human health applications in cancer and liver disease, but it is too early to pick a ‘killer application’ and raise federal funding around it. We feel very fortunate for these catalytic funds at such a pivotal time, to allow us to sort out what is its disruptive potential.”

Janet Conrad, a professor of physics, is working on new ways to detect neutrinos — tiny elementary particles that are incredibly abundant. More than 40 billion pass through your thumbnail every second, but they almost never interact with matter.

Until now physicists have been trying to detect neutrinos by building underground detectors that are more than 20 stories tall. However, these detectors must rely on the very rare chance of detecting a neutrino produced by the sun or in the atmosphere, or from accelerators located very far away from the detector. These detectors are so big that they cannot be built near large particle accelerators that could generate many more neutrinos.

To overcome that obstacle, Conrad is working on a cyclotron — a smaller-scale particle accelerator that could be installed underground next to an existing neutrino detector. This cyclotron, which would be about 4 meters in diameter, would provide a more abundant nearby source of neutrinos, making it easier to detect them.

“Existing detectors and neutrino sources have already pushed technology to its limits,” Conrad says. “Since neutrino physicists need even higher-intensity, purer, and more versatile sources for precision measurements, we have to look outside of the box. That is what this cyclotron project is about.”

Alternative use for coal

Jeffrey Grossman, a professor in the Department of Materials Science and Engineering (DMSE), and Nicola Ferralis, a research scientist in DMSE, are exploring alternative uses for coal. Instead of burning it, they hope to use it to create a new, cheaper solar cell.

Other researchers have shown that artificial forms of carbon, such as nanotubes and graphene, can be used to build efficient solar cells. Using such cells, you could power a 100-watt light bulb for one year using only 2 grams of carbon, compared with the 350 kilograms that would be needed to power the light bulb by burning coal.

However, these types of carbon materials suffer from the high cost of manufacturing and processing, which makes them more expensive than traditional silicon-based solar cells. The researchers hope to address that drawback by creating solar cells that use natural materials such as coal, tar, bitumen, or kerogen as the photoactive material.

Using these materials could enable the manufacture of solar cells that are even cheaper than silicon cells. In this project, Grossman and Ferralis plan to develop a prototype coal photovoltaic, an effort they describe as “far too risky” for traditional funding sources to consider.

“Even the current state-of-the-art materials research and the traditional funding venues have overlooked the incredible potential of using natural carbonaceous materials (i.e., coal, oil, kerogen) for renewable energy applications, focusing instead solely on artificial carbon materials,” the researchers wrote in their grant proposal.

Earl Miller, the Picower Professor of Neuroscience, is investigating how the harmonization of the brain’s rhythms, or brain waves, contributes to consciousness. Brain waves were first recorded using EEG more than 100 years ago, but their role in brain function has been largely ignored, Miller says. Different brain states correlate with certain frequencies of brain waves, but no one knows why.

Miller’s lab has pioneered multiple-electrode recording techniques that allow simultaneous study of hundreds of neurons. Using this approach, his lab has linked brain-wave oscillations with different types of mental activity. Now, he plans to take the next step: manipulating brain communication by artificially enhancing brain rhythms using transcranial electrical stimulation (TES), a noninvasive form of electrical stimulation to the scalp.

“The brain seems to hum to itself, using rhythms and harmony for communication. This humming helps different brain networks talk to one another,” Miller says. “We hope to use TES to boost the humming in a way that will improve brain communication.”

This could help boost normal cognition by improving focus and memory and may also offer new ways to treat diseases such as autism, ADHD, and schizophrenia, which some neuroscientists suspect may result from problems in communication between different parts of the brain.

Joel Voldman, a professor of electrical engineering and computer science, is working on new ways to separate different types of cells based on their inherent physical properties. Most cell-sorting methods, such as flow cytometry, require labeling cells with fluorescent tags pegged to certain molecules found inside the cells.

Sorting cells by properties such as size, shape, or mechanical, electrical, or optical properties offers a way to avoid labeling cells. Voldman has previously developed ways to measure intrinsic properties such as electrical polarizability of cells as they flow through a microfluidic device. In his Bose-funded research project, he plans to design chips that can perform multiple measurements on cells as they flow through a single channel, using computational microscopy — a technique that can track thousands of individual cells across a 1-centimeter area.

“I want to learn which combinations of physical properties are best able to distinguish different sets of cells, so that I can think about implementing systems that use only physical properties as the basis for separation,” Voldman says. “Such systems could analyze cells very quickly, as they would need only minimal sample preparation.”

He plans to begin by measuring a set of cell lines to help determine which combinations of features are most useful for distinguishing different cell types. Eventually, he envisions this project could lead to small tabletop devices that could be used to monitor the progression of disease by analyzing patients’ blood samples.

At a reception honoring the grant recipients tonight, the awardees will present their research projects to MIT President L. Rafael Reif and other invited guests. Faculty and senior research scientists interested in applying for future grants are invited to submit proposals in response to a call for proposals that is issued each year.