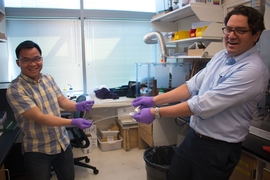 ↓ Download Image
Caption: Jinyao Liu, left, and Giovanni Traverso stretch a new hydrogel. To help ensure patients receive their full course of treatment, researchers have developed a new set of drug delivery materials made of the hydrogel. The material can reside in the stomach for up to nine days and slowly release its dosage of medication.

Caption:
Jinyao Liu, left, and Giovanni Traverso stretch a new hydrogel. To help ensure patients receive their full course of treatment, researchers have developed a new set of drug delivery materials made of the hydrogel. The material can reside in the stomach for up to nine days and slowly release its dosage of medication.

Around half of all medications for chronic diseases are not taken as prescribed, costing the U.S. health care system more than $100 billion in avoidable hospital stays each year.

This noncompliance is even more significant in the developing world, where health care budgets are chronically overstretched and patients treated for diseases such as malaria must take multiple drugs with complex dose regimens.

To help ensure patients receive their full course of treatment, researchers at MIT and Brigham and Women’s Hospital have developed a new set of drug delivery materials, which can reside in the stomach for up to nine days, slowly releasing their dosage of medication.

The materials, which the researchers describe in a paper published today in the journal Nature Communications, are known as triggerable tough hydrogels (TTH), according to Robert Langer, the David H. Koch Institute Professor at MIT and a member of MIT’s Koch Institute for Integrative Cancer Research.

“One of the biggest issues in health care is noncompliance, people simply not taking their drugs,” says Langer, who is one of the paper’s senior co-authors. “We have been working with the Bill and Melinda Gates Foundation to develop ultra-long-lasting capsules, which might last for the entire course of a treatment, or could be taken once a week or once a month, depending on the device.”

Developing a capsule that does not rapidly pass through the body, but can instead reside in the gastrointestinal (GI) tract for long periods of time, is no easy task, since any material must be able to withstand the considerable compressive forces in the stomach.

Any such device must also be small enough to be swallowed comfortably but large enough to avoid being passed out of the stomach and into the intestines through a region known as the pylorus, says Giovanni Traverso, a research affiliate at the Koch Institute, a gastroenterologist and biomedical engineer at Brigham and Women’s Hospital, and the paper’s co-senior author.

What’s more, it must be possible to trigger the device to self-destruct, in the event of an allergic reaction to, or unwelcome side effects from, the gel or the drug being delivered.

To this end, the researchers began investigating the use of hydrogels, polymer gels that have a high water content, giving them the capacity to swell when hydrated.

Capsules made from the hydrogel in a dehydrated state could be swallowed by the patient; they would then swell on entering the stomach, to prevent them passing through the pylorus.

However, hydrogels, which are typically formed from a single network of crosslinked polymer chains, tend to be quite soft, and they do not have the strength to withstand compressive forces.

So the researchers instead used two intertwined polymer networks, to build a stronger, more resilient material. “There are two networks. One is composed of alginate, a material derived from seaweed, and the other is polyacrylamide, a widely-used polymer,” Traverso says.

Crosslinked within these intertwined networks are two types of chemical bond, which can be dissolved on demand using biocompatible trigger compounds.

The polyacrylamide network is crosslinked with disulphide bonds, which can be dissolved using the antioxidant glutathione. The alginate network, in contrast, is crosslinked with ionic bonds, which can be dissolved with a chemical known as EDTA (Ethylenediaminetetraacetic acid), which is used as a preservative in some foods and as a treatment for mercury and lead poisoning.

In this way, if the capsule device needs to be removed from the stomach in a hurry, the patient can simply swallow the antidote compounds, triggering the material to break apart and allowing it to safely pass through the body.

When the researchers tested the mechanical strength of the materials, they found they were robust enough to resist fracture, even under pressure from a razor blade.

They then tested devices built from the materials in large animal models, where they found they were able to withstand the forces within the stomach for more than seven days, according to the paper’s lead author Jinyao Liu, an MIT postdoc.

Finally, they tested the device’s potential as a drug delivery system, by loading it with the antimalarial lumefantrine. They chose this drug as nonadherence to medication is a particular problem in treating cases of malaria in the developing world.

They found the device was able to release the lumefantrine in a controlled manner, over a period of days.

The paper exploits a strategy to make extremely tough hydrogels, according to Eric Appel, an assistant professor of materials science and engineering at Stanford University, who was not involved in the research.

“These materials have exceptional properties that make them capable of withstanding the stresses encountered within the gastrointestinal tract, leading the way to hydrogel systems that can be exploited as long-lasting oral drug delivery vehicles,” he says. “The ability of these devices to deliver drugs for several days in a large animal is remarkable.”

The researchers now plan to carry out further work on the rate of drug release from the capsules, and to investigate other applications for the materials, such as in weight loss intervention and tissue engineering.

Boston Herald reporter Lindsay Kalter writes that MIT researchers have developed a hydrogel-based capsule that can slowly release medications over several days and could help patients follow complex treatment regimens.  “A lot of people do not take their medication as prescribed,” explains postdoc Jinyao Liu. “With this, you just need a single dose.”