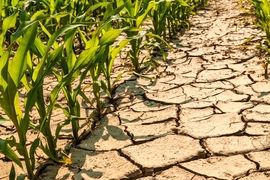 ↓ Download Image
Caption: MIT scientists have found that climate change will likely worsen drought conditions in parts of Africa, dramatically reshaping the production of maize throughout sub-Saharan Africa as global temperatures rise over the next century.

Caption:
MIT scientists have found that climate change will likely worsen drought conditions in parts of Africa, dramatically reshaping the production of maize throughout sub-Saharan Africa as global temperatures rise over the next century.

Nearly 25 percent of the world’s malnourished population lives in sub-Saharan Africa, where more than 300 million people depend on corn, or maize, as their main food source. Maize is the most widely harvested agricultural product in Africa and is grown by small farmers who rely heavily on rainwater rather than irrigation. The crop is therefore extremely sensitive to drought, and since 2015 its production has fallen dramatically as a result of record-setting drought conditions across southern and eastern Africa.

Now MIT scientists have found that climate change will likely further worsen drought conditions in parts of the continent, dramatically reshaping the production of maize throughout sub-Saharan Africa as global temperatures rise over the next century.

In a paper published online this week in the journal Earth’s Future, the researchers report that, if the world’s average temperatures rise by 4 degrees Celsius by the year 2100, much of southern Africa and the Sahel region just south of the Sahara desert — regions that contribute a significant portion of Africa’s maize production — will experience increased aridity, which in turn is predicted to decrease maize crop yields in some nations by over 20 percent.

“[Maize] is a relatively drought-sensitive crop in a region where agricultural production is mostly rainfed,” says lead author Amy Dale, a postdoc in MIT’s Department of Earth, Atmospheric and Planetary Sciences (EAPS). “If under climate change we have changes in temperature and precipitation, this is arguably one of the worst areas of the world where we’re going to see really negative impacts on crop production and malnourished populations.”

Kenneth Strzepek, a co-author on the paper and research scientist in MIT’s Joint Program on the Science and Policy of Global Change, says the study’s results provide a map for how agricultural conditions will change in the next century, as well as where climate change’s impact is still less clear. All this information, he says, is essential for government planners who aim to build up Africa’s economy and infrastructure.

“They are facing a great problem of how to devise development policies under the risk of climate change,” Strzepek says. “Governments want to be bold and build infrastructure in certain regions, but in 30 years can we afford to have [these structures] be stranded? The kind of results that are coming out of this study are valuable in how [development] moves forward.”

Strzepek and Dale’s co-authors include Charles Fant, a former postdoc; Megan Lickley, an EAPS graduate student; and Susan Solomon, the Lee and Geraldine Martin Professor of Environmental Studies in EAPS.

They adapted the crop model to simulate maize production in Africa, first dividing the continent into a grid pattern, with each grid cell measuring approximately 200 square kilometers. They applied the crop model to simulate maize growth for each grid cell, feeding into the model various inputs for each local grid, such as properties of the soil and the area of harvested crops in a given region — all data they obtained from publicly available datasets.

The team ran the crop model under 122 future climate scenarios, or projections of temperature and precipitation. Median projections were calculated for each of five climate model “ensembles” — sets of simulation runs that represent either combinations of different climate models or a single model run multiple times.

By combining climate and crop models, the team simulated maize yields in Africa for the years 2030, 2050, and 2090, under two climate change scenarios in which global average annual temperatures would rise by 2 degrees or 4 degrees Celsius by 2100 under different greenhouse gas concentration trajectories. These scenarios are described in the fifth Assessment Report of the Intergovernmental Panel on Climate Change, as “Representative Concentration Pathway 4.5 and 8.5.”

Across most of the continent, the researchers found most of the climate models agreed on the direction of change in maize production due to climate change. Under the worst-case scenario, in which global temperatures will rise by 4 degrees Celsius, these models estimate the Sahel and southern Africa will experience widespread yield losses, with some grid cells showing losses of up to 50 percent. The most pessimistic simulation runs predict a 30 percent reduction in maize production in southern Africa by 2090, with losses in Zambia reaching 40 percent.

The models also agree on climate change’s effect in subregions of eastern Africa, predicting that the Ethiopian highlands and the Horn of Africa will experience slightly higher maize yields. Corn production in Central Africa will stay more or less the same, as tropical rainforests there receive regular rainfall and are generally resilient to climate change.

Dale and her colleagues observed the climate models produced a much wider range of predictions — and therefore a higher degree of uncertainty — in the most arid regions of Africa. Some models predicted positive changes in crop yields, while others estimated more negative effects in desert and savanna regions.

“What this implies is, we need management strategies that are robust to uncertainty,” Dale says. “Farm-scale changes like switching cultivars, expansion of irrigation and nutrient management, changes in planting dates, and increased institutional capacity like insurance programs, research support, and improvements in food transport. We need to think about multifaceted approaches to adapting to climate change.”

This research was supported, in part, by the Abdul Latif Jameel World Water and Food Security Lab at MIT (J-WAFS).

Even if the Paris Agreement is implemented, food and water supplies remain at risk