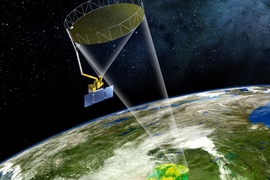 ↓ Download Image
Caption: The SMAP observations are providing an unprecedented level of detailed, worldwide information on the amount of water in those top 2 inches (5 centimeters) of soil, collected globally every two to three days.

Caption:
The SMAP observations are providing an unprecedented level of detailed, worldwide information on the amount of water in the top 2 inches (5 centimeters) of soil, collected globally every two to three days.
Credits:
Image: NASA/JPL-Caltech

The top 2 inches of topsoil on all of Earth’s landmasses contains an infinitesimal fraction of the planet’s water — less than one-thousandth of a percent. Yet because of its position at the interface between the land and the atmosphere, that tiny amount plays a crucial role in everything from agriculture to weather and climate, and even the spread of disease.

The behavior and dynamics of this reservoir of moisture have been very hard to quantify and analyze, however, because measurements have been slow and laborious to make.

That situation changed with the launch in 2015 of a NASA satellite called SMAP (Soil Moisture Active Passive), designed to provide globally comprehensive and frequent measurements of the moisture in that top layer of soil. SMAP’s first year of observational data has now been analyzed and is providing some significant surprises that will help in the modeling of climate, forecasting of weather, and monitoring of agriculture around the world.

These new results are reported in the journal Nature Geosciences, in a paper by SMAP Science Team leader Dara Entekhabi, recent MIT graduate Kaighin McColl PhD ’16, and four others. Entekhabi is a professor in the Ralph M. Parsons Laboratory for Environmental Science and Engineering in MIT’s Department of Civil and Environmental Engineering.

The SMAP observations are providing an unprecedented level of detailed, worldwide information on the amount of water in those top 2 inches (5 centimeters) of soil, collected globally every two to three days. Entekhabi says this is important because this thin layer is a key part of the global water cycle over the continents, and also a key factor in the global energy and carbon cycles.

Precipitation on land, and the evaporation of that moisture from the land, “transfers large amounts of energy” between the continents and the atmosphere, Entekhabi says, and the Earth’s climate would be drastically different without this element. The oceans, containing 97 percent of Earth’s water, provide a major role in storing and releasing heat, but over land that role is provided by the moisture in the topmost layer of the soil, albeit through different mechanisms. That moisture “is a tiny, tiny fraction of the water budget, but it’s sitting at a very critical zone at the surface of the land, and plays a disproportionately critical role in the cycling of water,” he says. “It plays a significant role in moderating climate, on seasonal and annual timescales.”

Understanding these cycles better, thanks to the new data, could help make weather predictions more accurate over longer timescales, which could be an important boon for agriculture. Several federal agencies have already begun using the SMAP data, Entekhabi says, for example, to help make forecasting of drought and flood conditions more accurate.

“The satellite is providing an extraordinary quality of surface soil moisture information that makes this analysis possible,” he says. The satellite’s primary mission of three years is about halfway over, he says, but the team is working on applying for an extended mission that could last as much as a decade.

One of the big surprises from the new data is that this top level of soil preserves a  “memory” for weather anomalies, more so than had been predicted from theory and earlier, sparser measurements. Memory refers to the persistence of effects from unusually high or low amounts of rainfall. Contrary to most researchers’ expectations, it turns out that these effects persist for a matter of days, rather than just a few hours. On average, about one-seventh of the amount of rain that falls is still present in that topmost layer of soil three days after it falls — and this persistence is greatest in the driest regions.

The data also show a significant feedback effect that can amplify the effects of both droughts and floods, Entekhabi says. When moisture evaporates from wet soil, it cools the soil in the process, but when the soil gets too dry that cooling diminishes, which can lead to hotter weather and heat waves that extend and deepen drought conditions. Such effects “had been speculated,” he says, “but hadn’t been observed directly.”

The ongoing SMAP mission also provides educational opportunities that help to verify and calibrate the satellite data. With minimal equipment, students can participate in hands-on lessons in data collection, using measurement methods that are considered the gold standard. For example, they can gather a sample of soil in a fixed volume such as a tuna can, and weigh it before and after drying it out. The difference between the two weights gives a precise measure of the soil’s moisture content in that volume, which can be compared with the satellite’s moisture measurement.

Even young students “can carry out ‘gold standard’ measurements, and all it takes is a kitchen scale and an oven,” Entekhabi says. “But it’s very labor-intensive. So we have engaged with schools around the world to do these measurements.”

“I would consider these findings quite significant,” says Joseph Santanello, a physical scientist in the Hydrological Sciences Branch at NASA’s Goddard Space Flight Center, who was not involved in this work. “First, the near-surface soil moisture is often overlooked in terms of land-air coupling and memory (in favor of root zone or vegetation controls). This does show that the soil surface moisture can be very important in the water budget and in modulating where precipitation ultimately ends up and how quickly.” He adds that “this is purely observation-based, and thus there are no model assumptions, parameterizations, or the like that need to be considered.”

Paul Dirmeyer, a professor of atmospheric, oceanic and earth sciences at George Mason University, who also was not connected with this research, says these results “will contribute to the growing base of land-atmosphere coupling metrics that are being developed to better understand how soil moisture affects climate, and how we can better represent these processes in weather and climate forecast models.” He adds, “The scaling properties over time demonstrated by the authors can have wide application in climate research.”