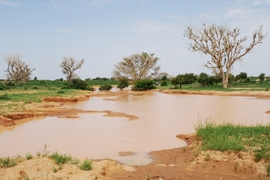 ↓ Download Image
Caption: This large pool of water near Banizoumbou, Niger, formed during the monsoon season and became a breeding site for mosquitoes. 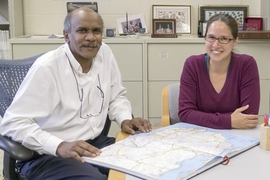 Caption:
This large pool of water near Banizoumbou, Niger, formed during the monsoon season and became a breeding site for mosquitoes.

Caption:
MIT Professor Elfatih Eltahir and doctoral student Teresa Yamana combined a new model of malaria transmission with global forecasts for temperature and rainfall to improve projections of malaria infection with climate change.
Credits:
Photo: James M. Long/MIT
As public-health officials continue to fight malaria in sub-Saharan Africa, researchers are trying to predict how climate change will impact the disease, which infected an estimated 219 million people in 2010 and is the fifth leading cause of death worldwide among children under age 5.

But projections of future malaria infection have been hampered by wide variation in rainfall predictions for the region and lack of a malaria-transmission model that adequately describes the effects of local rainfall on mosquitoes, which breed and mature in ephemeral pools that form during and after monsoons in West Africa.

A new MIT study led by Elfatih Eltahir, a professor in the Department of Civil and Environmental Engineering, combines a new model of malaria transmission with global forecasts for temperature and rainfall to improve predictions of malaria with climate change. Eltahir and graduate student Teresa Yamana found that although the capacity for malaria transmission will change in some areas of West Africa, overall infection rates are not likely to increase: Climate change by itself is not likely to make the situation worse. A paper on the study appeared online Sept. 16 in the journal Environmental Health Perspectives.

“Malaria is one of the world’s leading public-health problems, taking a toll not only in lives, but also in economic terms, especially in Africa,” Eltahir says. “While other researchers are looking at the global impacts of climate change on broadly defined variables such as global temperature or global sea level, the biggest challenge faced by the global climate-change research community is how to come up with credible predictions for specific variables that are relevant to society, such as malaria incidence, defined at the appropriate regional and local scales.”

The study used a combined epidemiological and hydrological model of malaria transmission developed earlier by Eltahir and former graduate student Arne Bomblies, now an assistant professor at the University of Vermont. The model uses detailed information about rainfall, temperature, wind, topography and soils at the village scale. It simulates mosquito behavior by tracking the location, biting, infective status and reproduction cycle of individual female mosquitoes on an hourly basis and includes variables describing humans and other animals that serve as sources of blood meals for mosquitos. Eltahir and Bomblies tested the model using extensive field data gathered from representative villages in Niger over two years, including adult mosquito abundance, observations of pools, and meteorological and soil-moisture measurements.

To incorporate regional data into the model, Yamana took daily satellite data and broke it down into hourly increments so the model could use hourly rainfall to simulate formation of breeding pools. She established baseline current climate conditions by feeding the model satellite data for five climate zones — starting at the southern fringes of the Sahara and moving south through the Sahel transitional zone into the wetter regions of the Guinean coast.

She then repeated the simulations using long-term temperature and rainfall predictions taken from global climate models, which predict a temperature increase in West Africa from 2 to 6 degrees Celsius by the end of the century, and rainfall changes ranging from large reductions to moderate or large increases. Working on the assumption that future rainfall levels will fall somewhere in between, Yamana and Eltahir identified the rainfall and temperature changes that would create the best and worst environmental suitability for malaria in each of the five zones.

They found that on the southern border of the Sahara, temperatures will become too hot for the survival of Anopheles funestus and Anopheles gambiae sensu lato, the most common malaria-carrying species in Africa. As a result, any likely changes in rainfall would have only a minor impact on malaria.

On the other extreme, hotter temperatures in the southern zone close to the Guinean coast will speed the development of the malaria parasite, improving environmental suitability for malaria regardless of changes in rainfall. However, this area is already heavily saturated with the disease, so the impact is expected to be minimal unless this region experiences an influx of people from the north.

Between these two extremes, the opposing impacts of warming temperature and increasing rainfall are likely to cancel each other, minimizing the impact on disease transmission along the transitional Sahel zone.

“Malaria-control efforts in recent years have been dramatically scaled up and it is possible that current malaria rates may fall in endemic areas to the point where changes in environmental suitability components of vectorial capacity could have a real impact on transmission,” says Kacey Ernst, an assistant professor in the Epidemiology and Biostatistics Division at the University of Arizona who was not involved in the study. “The authors’ inclusion of topography and pooling and the important impact this has on determining vector densities has been a critical missing piece in previous efforts.”

Chris Thomas, a professor of zoology and vice president for research at Aberystwyth University, agrees. “This paper is an important step in understanding how malaria distribution in sub-Saharan Africa may change with climate,” Thomas says. “Previous models have been focused on temperature shifts, with crude representations of rainfall. But it is the availability of water bodies for mosquito breeding that is often the limiting factor, and how these form and persist long enough for larval development is determined not just by rainfall but also hydrology. These are the important local-scale processes that have not previously been captured in regional-scale malaria-climate models. By applying the hydrologically driven model of mosquito population dynamics developed over several years, Professor Eltahir's team has demonstrated one way of doing this. The key now will be good old-fashioned field ecology for the new data needed to drive this next generation of spatial models.”

The researchers point out that their study does not take into account possible changes in population, migration, economics, health care and other socioeconomic factors.

“Many countries in this region are very underdeveloped and people are much more vulnerable to changes in the environment than people in more developed areas,” Yamana says. “If these countries become fully developed and are no longer vulnerable to vector-borne diseases, or malaria is completely eradicated, that would be fantastic news. But I don’t think we can count on either of these things happening in the near future.”

The study was funded by the National Science Foundation.