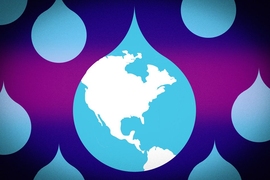 ↓ Download Image
Caption: “In the Southwest, water availability for irrigation is already a concern,” says Elodie Blanc, a research scientist at MIT’s Joint Program on the Science and Policy of Global Change. “If we mitigate, this could prevent added stress associated with climate change and a severe decrease in runoff in the western United States. But it will be even worse in the future if we don’t do anything at all.”

Caption:
“In the Southwest, water availability for irrigation is already a concern,” says Elodie Blanc, a research scientist at MIT’s Joint Program on the Science and Policy of Global Change. “If we mitigate, this could prevent added stress associated with climate change and a severe decrease in runoff in the western United States. But it will be even worse in the future if we don’t do anything at all.”

A new study by MIT climate scientists, economists, and agriculture experts finds that certain hotspots in the country will experience severe reductions in crop yields by 2050, due to climate change’s impact on irrigation.

The most adversely affected region, according to the researchers, will be the Southwest. Already a water-stressed part of the country, this region is projected to experience reduced precipitation by midcentury. Less rainfall to the area will mean reduced runoff into water basins that feed irrigated fields.

Production of cotton, the primary irrigated crop in the Southwest and in southern Arizona in particular, will drop to less than 10 percent of the crop yield under optimal irrigation conditions, the study projects. Similarly, maize grown in Utah, now only yielding 40 percent of the optimal expected yield, will decrease to 10 percent with further climate-driven water deficits.

In the Northwest, water shortages to the Great Basin region will lead to large reductions in irrigated forage, such as hay, grasses, and other crops grown to feed livestock. In contrast, the researchers predict a decrease in water stress for irrigation in the the southern Plains, which will lead to greater yields of irrigated sorghum and soybean.

If efforts are made to reduce greenhouse gases and mitigate climate change, the researchers find that water scarcity and its associated reductions in cotton and forage can be avoided.

“In the Southwest, water availability for irrigation is already a concern,” says first author Elodie Blanc, a research scientist at MIT’s Joint Program on the Science and Policy of Global Change. “If we mitigate, this could prevent added stress associated with climate change and a severe decrease in runoff  in the western United States. But it will be even worse in the future if we don’t do anything at all.”

Blanc’s study appears in the journal Earth’s Future, and her co-authors are Erwan Monier, a principal research scientist at MIT; Justin Caron, an assistant professor at HEC Montreal; and Charles Fant, a former MIT postdoc.

While many researchers have investigated the effects of climate change on crop yields, Blanc’s study is one of the first to consider how a changing climate may shape the availability and distribution of water basins on which irrigated crops depend.

“Most modeling studies that look at the impact of climate change on crop yield and the fate of agriculture don’t take into account whether the water available for irrigation will change,” Monier says.

In predicting how climate will affect irrigated crop yields in the future, the researchers also consider factors such as population and economic growth, as well as competing demands for water from various socioeconomic sectors, which are themselves projected to change as the climate warms.

“We try to be as representative of reality as possible,” Blanc says.

To do this, the researchers used a model of 99 major river basins in the country, which they combined with the MIT Integrated Global System Model-Community Atmosphere Model — a set of models that simulates the evolution of economic, demographic, trade, and technological processes. The models also include the greenhouse gas emissions and other pollutants that result from these processes, and they incorporate all of that information within a global climate model that simulates the physical and chemical processes in the atmosphere, as well as in freshwater and ocean systems.

“We’re looking at a more integrated world, and how all these interactions will drive changes in irrigation,” Monier says.

The researchers focused their global simulations on the U. S. and modeled the country’s evolving economic activities in different geographic regions to determine the water requirements for five main sectors: thermoelectric cooling; public supply, such as for drinking water and other public utilities; industrial demand; mining; and irrigation.

They then used a crop model to simulate daily water requirements for various crops, driven by the researchers’ modeled projections of precipitation and temperature, and compared these requirements with the amount of water predicted to be available for irrigation in a particular basin through the year 2050.

“The biggest finding is that it really makes a difference in specific regions, whether you take into account how irrigation availability will change in the future and how that will impact yields,” Monier says.

By 2050, the team projects that, under a business-as-usual scenario, in which no action is taken to reduce greenhouse gases, a number of water basins in the U.S. will start experiencing water shortages. Several basins, particularly in the Southwest, will see existing water shortages “severely accentuated,” according to the study.

The researchers note that the basins that will be the most affected generally do not supply the largest areas of irrigated cropland. For example, though climate change will significantly reduce cotton production in the Southwest, the bulk of the country’s cotton production does not occur in this region.

“It may not matter too much for the total crop production of the U.S., but if you’re a farmer in that particular region that’s going to be impacted, that matters to you,” Monier says. “What we want to do is provide useful information that either farmers or land investors can use to look into the future and make decisions on where is the right region to expand irrigated agriculture, and where is it more risky. We also want to make clear that climate mitigation is better for U.S. irrigated agriculture than not doing anything.”

Under the same business-as-usual scenario, the researchers projected higher yields for irrigated crops such as wheat, soybean, and sorghum. The increased production in these crops is driven by higher precipitation predicted to occur in the central U.S., combined with higher concentrations of carbon dioxide, which reduces a plant’s water requirements.

The researchers predict that crop yields for wheat, soybean, and sorghum should increase even more if mitigation measures are put in place. In addition to a business-as-usual scenario, the team ran its simulations under two mitigation scenarios, previously proposed by the U.S. Environmental Protection Agency, in which efforts are made to mitigate global warming to 2 and 3 degrees Celsius, relative to pre-industrial times.

They found that both mitigation scenarios should increase yields for all crops compared to the business-as-usual scenario, including cotton and forage, and that the more ambitious scenario has the potential to reduce the number of water-stressed basins.

Going forward, the researchers plan to factor into their simulations various ways in which climate change drives adaptation, and how such adaptations in turn shape crop patterns and the agricultural landscape.

“In the real world, if you’re a farmer and year after year you’re losing yield, you might decide, ‘I’m done farming,’ or switch to another crop that doesn’t require as much water, or maybe you move somewhere else,” Monier says. “That’s the next step: How would the agricultural sector adapt?”

This research was supported, in part, by the U.S. Environmental Protection Agency and the U.S. Department of Energy.

MIT researchers have found that by 2050 climate change could deplete water basins and reduce crop yields, reports The Boston Globe’s Alyssa Meyers. If no action is taken to combat climate change, “numerous basins used to irrigate crops across the country will either start to experience shortages or see existing shortages ‘severely accentuated.’”

Gauging the impact of climate change on U.S. agriculture

How much of a difference will the Paris Agreement make?