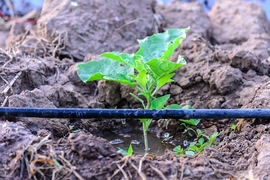 ↓ Download Image
Caption: Engineers at MIT have found a way to cut the cost of solar-powered drip systems by half, by optimizing the drippers. Furthermore, these new drippers can halve the pumping power required to irrigate, lowering energy bills for farmers. Pictured is an example of a current drip system.

Caption:
Engineers at MIT have found a way to cut the cost of solar-powered drip systems by half, by optimizing the drippers. Furthermore, these new drippers can halve the pumping power required to irrigate, lowering energy bills for farmers. Pictured is an example of a current drip system.

Many farms in drought-prone regions of the U.S. rely on drip irrigation as a water-saving method to grow crops. These systems pump water through long thin tubes that stretch across farm fields. Hundreds of dime-sized drippers along the length of each tube trickle water directly onto a plant’s base. A farmer can control the timing and amount of watering, delivering only as much water as a crop requires.

Drip irrigation can reduce a farm’s water consumption by as much as 60 percent and increase crop yield by 90 percent, compared with conventional irrigation methods. But these systems are expensive, particularly in off-grid environments where they cost farmers more than $3,000 per acre to install.

Now engineers at MIT have found a way to cut the cost of solar-powered drip systems by half, by optimizing the drippers. Furthermore, these new drippers can halve the pumping power required to irrigate, lowering energy bills for farmers. The team modified the drippers’ dimensions in a way that significantly reduces the pressure required to pump water through the entire system, while still delivering the same amount of water.

The team, led by Amos Winter, an assistant professor of mechanical engineering, plans to further modify the system upstream, optimizing the tubing, filters, pumps, and solar power system to ultimately make drip irrigation affordable for farmers in developing regions of the world.

“Many small farmers in India make only a few hundred dollars a year, so a drip irrigation system is way outside their price point,” Amos says. “Low-cost drip systems could help them increase their yield and income, so they can get out of the cycle of poverty.”

The team has published its engineering theory on dripper design in PLOS One. The paper’s co-authors are lead author and graduate student Pulkit Shamshery, former MIT postdoc Ruo-Qian Wang, and undergraduate Davis Tran.

Today, farmers in India and other developing parts of the world mainly grow crops using flood irrigation, an ancient, low-tech method that involves flooding fields with redirected river or groundwater. While this method is inexpensive, farmers have little control over when and how much to water their crops. Flood irrigation is also inefficient, as most of the water not taken up by plants either evaporates or drains away.

“The silver bullet here is drip irrigation … but it’s exorbitantly expensive,” Winter says. “The main cost driver is the pump and power system. That laid the foundation for our research project: Could we make drippers that operate on much lower pressures, and thus cut the pumping power and the capital costs?”

To do this, the researchers set out to characterize the behavior of existing “pressure compensating” drippers — drippers designed to maintain a constant flow rate, regardless of the initial water pressure that is applied. Such a feature enables every dripper along a tube to deliver the same water flow throughout a farm field, regardless of how far away an individual dripper is from the central pump.

Most conventional drip irrigation systems are designed to operate the drippers at a pressure of at least 1 bar. To maintain this pressure requires energy, which constitutes the main capital expense in off-grid drip irrigation systems, and the primary recurring cost in on-grid systems. Winter and Shamshery aimed to design pressure-compensating drippers to operate at 0.1 bar — one-tenth of the pressure of commercial systems. This reduction can halve both the power required to pump water through the drippers and the capital cost of an off-grid drip system.

The team set out to characterize the features in drippers that produce a pressure-compensating effect. To do this, they first generated a model of a conventional pressure-compensating dripper in MatLab, a numerical computing program that enables researchers to change the dimensions of a model to produce a change in behavior. In this case, Shamshery studied the dynamics of water flowing through the modeled dripper, and then came up with a mathematical description to explain how a dripper’s internal features affect fluid flow and water pressure.

Shamshery then coupled the mathematical model with a genetic algorithm — a computer program that simulates evolution of, in this case, various parameters in a dripper. For instance, the team selected a range of dimensions for certain features and tested their flow behavior in simulation. They discarded those dimensions that produced undesirable water pressure, and kept the better performers, which they fed back into the algorithm with a new set of dimensions.

They evolved the dripper’s dimensions to a geometry that produced an optimal flow rate with an initial pressure as low as 0.15 bar. Using these optimal dimensions, the team fabricated a few dripper prototypes and tested them in the lab, with results that matched their simulations.

Winter is now working with the United States Agency for International Development (USAID) and Jain Irrigation, a major manufacturer of drip irrigation systems, to test the optimized drippers in Morocco and Jordan, where he says there is a push to shift farmers to drip irrigation.

“With these drippers, poor farmers can now grow higher-value crops, like off-season crops that they couldn’t grow unless they had rain, and make more money to try and get out of poverty,” Winter says. “In places like California, with a history of blackouts, this means not only less water consumption, but less energy [used] for agriculture.”

“It turns out there is a massive untapped market in off-grid situations,” Winter says. “If you look at the developing world, there are about half a billion small farms with 2.5 billion people. For them, this technology could be a game-changer.”

This research was supported in part by USAID, Jain Irrigation, and the MIT Tata Center for Technology and Design.

Cleaning water without the grid