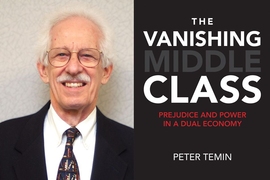 ↓ Download Image
Caption: “We have a fractured society,” says MIT professor Peter Temin. “The middle class is vanishing.” His new book, “The Vanishing Middle Class: Prejudice and Power in a Dual Economy,” is being published this month by MIT Press.

Caption:
“We have a fractured society,” says MIT professor Peter Temin. “The middle class is vanishing.” His new book, “The Vanishing Middle Class: Prejudice and Power in a Dual Economy,” is being published this month by MIT Press.

For many people in America, being middle class isn’t what it used to be.

Consider: In 1971, the U.S. middle class — with household incomes ranging from two-thirds to double the national median — accounted for almost 60 percent of total U.S. earnings. But in 2014, middle-class households earned just about 40 percent of the total national income. And, adjusted for inflation, the incomes of goods-producing workers have been flat since the mid-1970s.

“We have a fractured society,” says MIT economist Peter Temin. “The middle class is vanishing.”

Now Temin, the Elisha Gray II Professor Emeritus of Economics in MIT’s Department of Economics, has written a book exploring the topic. “The Vanishing Middle Class: Prejudice and Power in a Dual Economy,” published this month by MIT Press, examines the plight of middle-income earners and offers some prescriptions for changing our current state of affairs.

The “dual economy” in the book’s title also represents a bracing reflection of America’s class schism. Temin, a leading economic historian, draws the term from the work of Nobel Prize winner W. Arthur Lewis, who in the 1950s applied the model of a dual economy to developing countries. In many of those nations, Lewis contended, there was not a single economy but a two-track economy, with one part containing upwardly-mobile, skilled workers and the other part inhabited by subsistence workers.

Applied to the U.S. today, “The Lewis model actually works,” Temin says. “The economy can grow, but it detaches from the [subsistence] sector. Simple as it is, the Lewis model offers the benefit that a good economic model does, which is to clarify your thinking.”

In Temin’s terms, updated, America now features what he calls the “FTE sector” — people who work in finance, technology, and electronics — and “the low-wage sector.” Workers in the first sector tend to thrive; workers in the second sector usually struggle. Much of the book delves into how the U.S. has developed this way over the last 40 years, and how it might transform itself back into a country with one economy for all.

As Temin sees it, there are multiple reasons for the decline in middle-class earning power. To cite one: The decline of unionization, he contends, has reduced the bargaining power available to middle class workers.

“In the [political and economic] turmoil of the ’70s and ’80s, the unions declined, and the institutions that had been keeping labor going along with rising productivity were destroyed,” Temin says. “It’s partly [due to] new technology, globalization, and public policy — it’s all of these things. What it did was disconnect wages from the growth in productivity.”

Indeed, from about 1945 until 1975, as Temin documents in the book, U.S. productivity gains and the wage gains of goods-producing workers tracked each other closely. But since 1975, productivity has roughly doubled, while those wages have stayed flat.

Where “The Vanishing Middle Class” moves well beyond a discussion of basic economic relations, however, is in Temin’s insistence that readers consider the interaction of racial politics and economics. As he puts it in the book, “Race plays an important part in discussions of politics related to inequality in the United States.”

To take one example: Again starting in the 1970s, incarceration policies led to an increasing proportion of African-Americans being jailed. Today, Temin notes, about one in three African-American men will serve jail time, which he calls “a very striking figure. You can see how that would just destroy the fabric of a community.” After all, those who become imprisoned see a significant reduction in their ability to obtain healthy incomes over their lifetimes.

For that matter, Temin observes, incarceration has expanded so dramatically it has affected the ability of society to pay for prisons, which may be a factor that limits their further growth. At the moment, he notes in the book, the U.S. states pay roughly $50 billion a year for prisons and roughly $75 billion annually to support higher education.

Temin contends in the book that a renewed focus on education is a principal way to distribute opportunities better throughout society.

“The link between the two parts of the modern dual economy is education, which provides a possible path that children of low-wage workers can take to move into the FTE sector,” Temin writes.

That begins with early-childhood education, which Temin calls “critically important” — although, he says, “in order to continue those benefits, [students] have to build on that foundation. That goes all the way up to college.”

And for students in challenging social and economic circumstances, Temin adds, what matters is not just the simple acquisition of knowledge but the classroom experiences that lead to, as he puts it, “Knowing how to think, how to get on with people, how to cooperate. All the social skills and social capital … [are] going to be critically important for kids in this environment.”

In the book Temin bluntly advocates for greater investment in public schools as well as public universities, saying that America’s “educational system was the wonder of the 20th century.” It still works very well, he notes, for kids at good public schools and for those college students who graduate without burdensome debt.

But for others, he notes, “We don’t have a path for the next generation to have what we expect for a middle-class life … [and] not everyone wants to finance it.”

“The Vanishing Middle Class” comes amid increasing scrutiny of class relations in the U.S., but at a time when the public discussion of the topic is still very much evolving. Gerald Jaynes, a professor in the departments of Economics and African American Studies at Yale University, calls Temin’s new book “a significant addition to the existing literature on inequality.”

Temin, for his part, hopes that by the end of “The Vanishing Middle Class,” readers will agree that a society paying for more education will have made a worthy investment.

“The people in this country are the resource we have,” Temin says. “If we maintain the character of our fellow citizens, that is really our national strength.”

In an article for the Financial Times about the best economics books of 2017, Martin Wolf highlights new works by Prof. Andrew Lo and Prof. Peter Temin. Wolf writes that in Temin’s “important and provocative book, [he] argues that the US is becoming a nation of rich and poor, with ever fewer households in the middle.”

Times Higher Education reporter Nicola Ingram examines Prof. Peter Temin’s latest book, which examines the state of the U.S. economic system. Temin, “provides an engaging commentary on the complexities of policy developments and their impact on workers’ conditions, as well as the problematic voting behaviour that seals their fate.”

In an article for The Atlantic, Gillian B. White writes about Prof. Peter Temin’s new book, “The Vanishing Middle Class: Prejudice and Power in a Dual Economy.” White writes that in his book Temin argues that “following decades of growing inequality, America is now left with what is more or less a two-class system.”