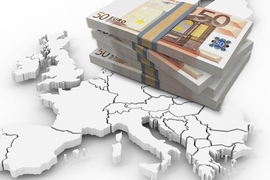 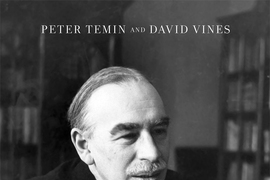 ↓ Download Image
Caption: The cover of "Keynes: Useful Economics for the World Economy," written by Peter Temin, an MIT economic historian, and David Vines, a professor of economics at Oxford University, and published this month by MIT Press.
Credits: Courtesy of MIT Press

Caption:
The cover of "Keynes: Useful Economics for the World Economy," written by Peter Temin, an MIT economic historian, and David Vines, a professor of economics at Oxford University, and published this month by MIT Press.
Credits:
Courtesy of MIT Press

In 1919, when the victors of World War I were concluding their settlement against Germany — in the form of the Treaty of Versailles — one of the leading British representatives at the negotiations angrily resigned his position, believing the debt imposed on the losers would be too harsh. The official, John Maynard Keynes, argued that because Britain had benefitted from export-driven growth, forcing the Germans to spend their money paying back debt rather than buying British products would be counterproductive for everyone, and slow global growth.

Keynes’ argument, outlined in his popular 1919 book, “The Economic Consequences of the Peace,” proved prescient. But Keynes is not primarily regarded as a theorist of international economics: His most influential work, “The General Theory of Employment, Interest, and Money,” published in 1936, uses the framework of a single country with a closed economy. From that model, Keynes arrived at his famous conclusion that government spending can reduce unemployment by boosting aggregate demand.

But in reality, says Peter Temin, an MIT economic historian, Keynes’ conclusions about demand and employment were long intertwined with his examination of international trade; Keynes was thinking globally, even when modeling locally.

“Keynes was interested in the world economy, not just in a single national economy,” Temin says. Now he is co-author of a new book on the subject, “Keynes: Useful Economics for the World Economy,” written with David Vines, a professor of economics at Oxford University, published this month by MIT Press.

In their book, Temin and Vines make the case that Keynesian deficit spending by governments is necessary to reignite the levels of growth that Europe and the world had come to expect prior to the economic downturn of 2008. But in a historical reversal, they believe that today’s Germany is being unduly harsh toward the debtor states of Europe, forcing other countries to pay off debts made worse by the 2008 crash — and, in turn, preventing them from spending productively, slowing growth and inhibiting a larger continental recovery.

“If you have secular [long-term] stagnation, what you need is expansionary fiscal policy,” says Temin, who is the Elisha Gray II Professor Emeritus of Economics at MIT.

Additional government spending is distinctly not the approach that Europe (and, to a lesser extent, the U.S.) has pursued over the last six years, as political leaders have imposed a wide range of spending cuts — the pursuit of “austerity” as a response to hard times. But Temin thinks it is time for the terms of the spending debate to shift.

“The hope David and I have is that our simple little book might change people’s minds,” Temin says.

“Sticky” wages were the sticking point

In an effort to do so, the authors outline an intellectual trajectory for Keynes in which he was highly concerned with international, trade-based growth from the early stages of his career until his death in 1946, and in which the single-country policy framework of his “General Theory” was a necessary simplification that actually fits neatly with this global vision.

As Temin and Vines see it, Keynes, from early in his career, and certainly by 1919, had developed an explanation of growth in which technical progress leads to greater productive capacity. This leads businesses in advanced countries to search for international markets in which to sell products; encourages foreign lending of capital; and, eventually, produces greater growth by other countries as well.

However, in their view, Keynes had to overcome a crucial sticking point in his thought: As late as 1930, when Keynes served on a major British commission investigating the economy, he was still using an older, neoclassical idea in which all markets reached a sort of equilibrium.

This notion implies that when jobs were relatively scarce, wages would decline to the point where more people would be employed. Yet this doesn’t quite seem to happen: As economists now recognize, and as Keynes came to realize, wages could be “sticky,” and remain at set levels, for various psychological or political reasons. In order to arrive at the conclusions of the “General Theory,” then, Keynes had to drop the assumption that wages would fluctuate greatly.

“The issue for Keynes was that he knew that if prices were flexible, then if all prices [including wages] could change, then you eventually get back to full employment,” Temin says. “So in order to avoid that, he assumed away all price changes.”

But if wages will not drop, how can we increase employment? For Keynes, the answer was that the whole economy had to grow: There needed to be an increase in aggregate demand, one of the famous conclusions of the “General Theory.” And if private employers cannot or will not spend more money on workers, Keynes thought, then the government should step in and spend.

“Keynes is very common-sense,” Temin says, in “that if you put people to work building roads and bridges, then those people spend money, and that promotes aggregate demand.”

Keynes’ interest in international trade and international economics never vanished, as Temin and Vines emphasize. Indeed, in the late stages of World War II, Keynes was busy working out proposals that could spur postwar growth within this same intellectual framework — and the International Monetary Fund is one outgrowth of this effort.

“Keynes: Useful Economics for the World Economy” has received advance praise from some prominent scholars. French economist Thomas Piketty calls the book “highly relevant for today’s world,” while the Oxford economist Simon Wren-Lewis says it “brings Keynesian thinking alive,” and is “a fascinating exploration of a revolution in economic thought.”

Nonetheless, Temin is guarded about the prospect of changing the contemporary austerity paradigm.

“I can’t predict what policy is going to do in the next couple of years,” Temin says. And in the meantime, he thinks, history may be repeating itself, as debtor countries are unable to make capital investments while paying off debt.

Germany has “decided that they are not willing to take any of the capital loss that happened during the crisis,” Temin adds. “The [other] European countries don’t have the resources to pay off these bonds. They’ve had to cut their spending to get the resources to pay off the bonds. If you read the press, you know this hasn’t been working very well.”

Nobel laureate Krugman: ‘Dark age of macroeconomics’ is upon us