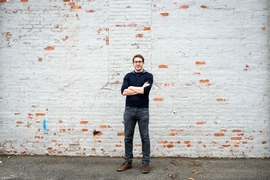 ↓ Download Image
Caption: “Right now, the best thing I can do is live the questions,” says Nils Wernerfelt, a PhD student in MIT’s Department of Economics. 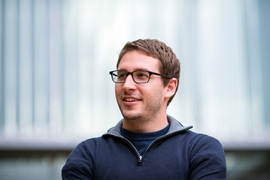 ↓ Download Image
Caption: “Right now, the best thing I can do is live the questions,” says Nils Wernerfelt, a PhD student in MIT’s Department of Economics.
Credits: Photo: Ian MacLellan

Caption:
“Right now, the best thing I can do is live the questions,” says Nils Wernerfelt, a PhD student in MIT’s Department of Economics.
Credits:
Photo: Ian MacLellan

Most PhD projects require great commitment, and Nils Wernerfelt's is no exception. Last year, when he suddenly received the opportunity to collaborate with researchers at Facebook, he flew out on a week's notice to San Francisco and has been living out of his suitcase, sleeping on friends’ floors or in Airbnb’s and sublets ever since.

Embedding within a large tech company, working face-to-face with computer scientists, sociologists, and statisticians from around the world has been “really exciting,” Wernerfelt says.

This diversity of backgrounds is particularly appealing to him, as throughout his time at MIT, he has worked on projects ranging from the connection between asthma and vitamin D deficiency during pregnancy, to changing attitudes about the LGBT community. For Wernerfelt, a PhD candidate in economics, there is no shortage of research topics in the world; the difficulty is in deciding which one to pursue next.

After finishing his bachelor’s degree in mathematics at Harvard University, Wernerfelt knew he wanted to continue on to graduate school, but he wasn’t exactly sure what to study. He applied to a mixture of schools, or, as he puts it, “I threw a bunch of stuff at the wall and saw what stuck,” and eventually decided on economics, a field that appeals to him because it can be applied to so many different subjects.

“I view it as a tool-based discipline,” he says. “It's very flexible in that so many of the things you think about in the world can be understood through an economic lens and then analyzed with the toolkit that you learn.”

For Wernerfelt, the broad applicability of economics has allowed him to continuously mine the world around him for research topics.

“How I approach questions is, you're reading The New York Times, or you're at a bar having a discussion with someone, and you just sort of think of something,” he says. “And then you're like, well, we can test this, let me go get data.”

This is almost exactly how Wernerfelt’s first research project at MIT developed. It started when Richard Zeckhauser, a professor at the Harvard Kennedy School who had worked with Wernerfelt in the past, started chatting with a doctor at a dinner party. The doctor brought up his hypothesis that in utero vitamin D deficiency causes babies to have a higher likelihood of developing asthma. Zeckhauser realized that it might be cheaper and easier to test this hypothesis with an economics approach than with clinical trials. Soon afterward he emailed Wernerfelt, who was immediately intrigued.

“I had never really thought much about asthma before,” he says. “But when we heard about this hypothesis, it was like, wow, here's something that is really impactful that we could actually use economics to say something useful about. About one in 12 Americans has asthma, and it is a hugely costly disease that we don't know much about.”

Wernerfelt dove into the research, focusing on two main datasets. The first was historical data from the Centers for Disease Control and Prevention about when and where people were born, and whether or not they have asthma. The second was data from weather stations around the country that record hours of sunlight every day. (Sunlight accounts for 90 percent of our vitamin D intake).

A personal quest for answers

It was a much more personal experience, however, that prompted what would become Wernerfelt’s dissertation research. Wernerfelt, who is openly gay, describes himself as “very closeted” during his first few years at Harvard, in part because he didn’t know any gay people. That all changed when he became Facebook friends with a classmate he met in the dining hall.

“He changed his ‘interested in’ field on Facebook to say that he was gay, and he wrote a post about this,” recalls Wernerfelt. “I didn't know any gay people, so this was all of a sudden someone that, because of Facebook, I was able to connect with. Ultimately that first connection gave me the confidence to start down the road to eventually coming out.”

In the years that followed, Wernerfelt noticed that there seemed to be an accelerating wave of support for the LGBT community as more public figures came out and more states legalized same-sex marriage. For example, between the early 1980s and 2013, the number of poll respondents who indicated they personally knew a gay person increased from 24 to 87 percent.

Wernerfelt wanted to study this shift and better understand how attitudes about the LGBT community are changing, which is when he turned back to Facebook.

“I felt like Facebook was the only entity in the world that had data that could speak to this,” he says. “There are a few government surveys that monitor sexual orientation, but their sample sizes are super, super small.”

He points out that Facebook has 1.7 billion monthly active users, and after the Supreme Court ruling on marriage equality, some 26 million users overlaid a rainbow flag on their profile pictures in a 48-hour period. More broadly, Wernerfelt concluded that there is evidence that the connectivity of Facebook is making a difference for the LGBT community.

“For a long time in this country, because there weren’t a lot of openly LGBT people, very few people knew any, and so it was easier for stigma to persist,” he says. “What you see is that support and people coming out are going up in tandem. I think that the personal contact has played a huge role, and that’s something Facebook has really enabled.”

Wernerfelt was so excited about the research questions he could tackle at Facebook that he has decided to stay at the company in its Core Data Science group.

Wernerfelt, who will finish his PhD this September, greatly credits his advisors Michael Whinston, David Autor, Daron Acemoglu, and Richard Zeckhauser, and his classmates with helping him grow intellectually and personally during his time at MIT. Ultimately, he would like to return to academia, but for the foreseeable future he is excited to pursue whatever questions and opportunities he finds at Facebook.

While this indirect path engenders some uncertainty, he says his current mindset is best embodied in a quotation by poet Ranier Maria Rilke that ends, “Do not now seek the answers, which cannot be given you because you would not be able to live them. And the point is, to live everything. Live the questions now. Perhaps you will then gradually, without noticing it, live along some distant day into the answer.”

“Right now what I want to do is live the questions,” Wernerfelt says. “And someday I'll look back and I'll have a career that will be one I've lived myself into, no doubt centered around studies of economics and human behavior.”