Helping others in daily doses 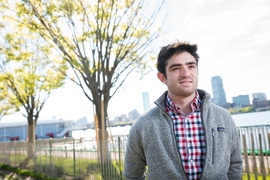 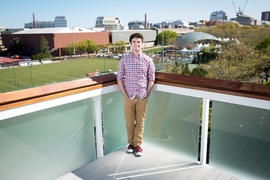 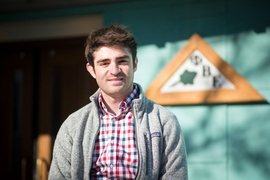 Caption:
“I think just by talking to each other and helping people, not only do you potentially inspire someone, or help them make the right choice, but also you learn a lot yourself,” Donald Little says.
Credits:
Photo: Ian MacLellan

When senior Donald Little saw a need for better day-to-day organization in his fraternity house, he got to work on a Web application to address it. The app, called FratWorks, is just one example of how Little has improved people’s daily lives during his time at MIT. Whether he is developing useful apps or mentoring other students, the computer science and engineering major strives to connect with others and help them in ways big and small.

Little credits his background with helping him gain a broad perspective on the world at a young age. Little’s family moved from Texas to Argentina when he was 2 and moved to Egypt when he was 13. In Egypt, he attended an international high school along with students from all over the world.

It was his experience in high school that taught Little the importance of connecting with people and keeping an open mind.

“Every time you met someone new, you learned a new cultural bit from wherever that person was from,” says Little. “That made me realize that you always learn something new from the people you meet, and the people you meet also shape you. And that kept encouraging me to meet new people.”

Helping others with computer science

When Little arrived at MIT, he was confident that he would major in either electrical engineering or mechanical engineering, but he soon realized that he enjoyed computer science even more. During an advanced Python course, Little, along with classmates Sami Alsheikh and Michael Handley, designed a computer game called “Balloon Boy,” where a boy with a balloon must move left and right to avoid falling nails. The game, which required the team to apply a lot of physics, showed Little the interdisciplinary nature of computer science and also taught him how much fun it can be.

“Because I saw a lot of my friends playing the game and having fun, I was like ‘hey, I think I can do something that other people are going to make use of and enjoy,’” he says. “And at the end of the day it's also something that I enjoy doing.”

Since then, Little has focused on using his computer science skills to create programs that help people by improving or facilitating their lives. During his sophomore year, he noticed that many MIT students have difficulty navigating MIT’s numbering system for courses. Little responded by designing a plug-in that allowed students to click on a course number in a Facebook conversation, and see a pop-up window with the course name, description, and evaluations.

Along the same lines, when Little was frustrated that he could only access MIT’s printers from his laptop, he developed an app that allows students to print from their phones.

“Technology evolves very quickly and it's always hard for institutions or groups to keep up,” says Little. “So creating these accessibility tools allows groups to catch up or see a glimpse of what's possible with technology.”

Little’s most successful app to date is Ranger Dave Sent Me, which he developed with the goal of improving people’s experiences at music festivals. These festivals tend to last all day or all weekend long, and people often know only a few of the many artists performing. The app uses festival-goers’ individual preferences to help them build full schedules of music they might enjoy. The app won first place at the OutsideHacks hackathon and became the official app of the OutsideLands 2015 music and art festival, growing from zero to 18,000 users in 48 hours.

Finally, FratWorks is the task management system that Little created this past January to help the 50 brothers living in his fraternity house stay on top of their chores and divide the housework evenly. The app, which won first place in 6.148 (Independent Activities Period Programming Competition), allows people to sign up for tasks that need to be done, and sends frequent reminders. Little sees FratWorks as his way of giving back to his fraternity. He also thinks it has applications beyond fraternities and eventually hopes to release it to the public.

When Little and his classmates were struggling with their “Balloon Boy” game, an older student stepped in to help, an experience that opened Little’s eyes to the value of mentorship.

“It made me realize how much of an impact you can have just by guiding people or helping people, which is something that I've done ever since,” he says.

As an orientation leader, Little helped freshmen adjust to MIT during their first week on campus. And as an academic advisor, he guided freshmen through their first semester, providing suggestions about what courses they should take and checking up on them throughout the term. Little has also mentored underclassmen within the unofficial mentoring system at his fraternity.

“I think just by talking to each other and helping people, not only do you potentially inspire someone, or help them make the right choice, but also you learn a lot yourself,” says Little. “There’s always something someone else can teach you.”

Immediately after graduation, Little will join Lob, a San Francisco-based company that is working on automating printing and mailing around the world. Little, who interned at Lob last summer, looks forward to working at a small company, where he can learn about every aspect of running a business, while experiencing the company’s successes and failures.

“Just as you can learn from the successes, you can always learn from the failures,” says Little. “Once you make a mistake you realize how you did it and why it was bad, and you learn to try to avoid it and never do it again.”

In the long-term, Little hopes to start his own company, and while he isn’t sure exactly what the company will do, he sees himself continuing on his current path.

“I want to create a product that will help people improve their daily lives,” he says. “I still don't know what that product might be, but I do want something that will have a big impact.”

Computer science and engineering major helps people while having fun