Computer science and engineering major helps people while having fun 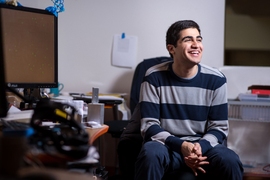 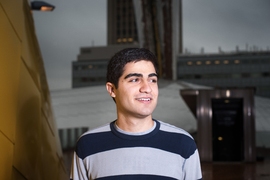 ↓ Download Image
Caption: “In research contexts, I’m driven mostly by the technical difficulty of the problem, and the opportunity to learn,” Sami Alsheikh explains.

Caption:
“In research contexts, I’m driven mostly by the technical difficulty of the problem, and the opportunity to learn,” Sami Alsheikh explains.
Credits:
Photo: Ian MacLellan

Sami Alsheikh’s time at MIT has been guided by a few simple principles: pursue things you enjoy, develop useful skills that can be applied in different ways, and help people as much as possible. Over the past four years, whether he has been absorbed in computer science courses, building a platform to increase political engagement, or playing with campers as a counselor at Camp Kesem, Alsheikh has managed to live by all three.

Alsheikh, a senior computer science and engineering major, grew up in Pensacola, Florida. His parents, both physicians, moved from Syria to the United States before he was born, seeking better professional opportunities. Alsheikh’s extended family still lives in Syria, and he and his family visited every summer until 2011. Alsheikh describes Pensacola as a politically conservative region, a sharp contrast to the more liberal area around MIT. He appreciates that his experiences living in parts of the United States with differing political views, along with his visits to Syria, have provided him with diverse perspectives about the world.

Alsheikh first set his eyes on MIT while researching top institutions for math and science, but for him, what makes MIT special is the people.

“That was one of the biggest draws for me and has proven to be one of the best things,” explains Alsheikh. “There's kind of this guarantee that everyone here has worked to become really clever at something. It's awesome to be a part of a collaborative community with people like that.”

Computer science is the tool

When Alsheikh came to MIT he planned on studying physics, but over the course of his freshman year, he found himself gravitating toward computer science, which he describes as more of a tool than a subject.

“I saw that computer science touched on a lot of different subjects,” he says. “It has this theoretical and precise appeal of purer sciences like math and physics, while still providing the applicability of engineering.”

He experienced this first-hand during an MIT course where he designed a computer game called “Balloon Boy” that involves a boy with a balloon who must move left and right to avoid falling nails that could pop the balloon.

“That sounds really silly,” he admits. “But it actually kick-started everything because of how interdisciplinary it was.”

As Alsheikh and his classmates designed the game, they drew on a number of different fields including physics, which they needed to accurately simulate the drag and buoyancy of the balloon.

Alsheikh is currently doing computer science research in MIT’s Computer Science and Artificial Intelligence Laboratory (CSAIL) with Wojciech Matusik, associate professor of electrical engineering and computer science, who leads the Computational Fabrication Group. The research focuses on using newly developed radar technologies to understand different environments. Radar offers advantages over video because it doesn’t require light and has the potential to pick up on additional characteristics such as texture or material properties.

Alsheikh’s work involves taking readings with small, new high-frequency radar chips, and exploring different analysis methods to derive meaning from the data. He stays motivated by focusing on the technical problem at hand.

“In research contexts, I’m driven mostly by the technical difficulty of the problem, and the opportunity to learn,” he explains.

Alsheikh is also interested in socially impactful applications of his computer science skills. As part of Start IAP, a four-week startup accelerator for MIT students, he is working on building a Web-based platform that will encourage people to become more engaged in U.S. policy.

“I don't know what legislation is passed, and neither do a lot of people,” explains Alsheikh. “We're trying to build this platform where, based on your demographic information and your interests, we tell you how current legislation that's being considered affects you.”

Helping others and having fun

Beyond his academic interests, Alsheikh also enjoys helping people, offering the simple explanation that he does it because it makes him feel good. Over the past three years, Alsheikh has been involved in Camp Kesem, a one-week overnight camp for kids ages 6 to 18 whose parents have been affected by cancer. The camp, which is celebrating its 10th anniversary this summer, now serves over 170 children each summer, free of charge. It is a place where the campers are able to open up and find support, but also have fun and enjoy themselves despite their tough situations.

“It's really a great deal,” says Alsheikh. “It sounds like it's supposed to be a therapy camp, maybe have a little bit of a sad mood, but it's actually nothing like that.”

Alsheikh, who enjoys that camp allows him to embrace his goofy, energetic side, reveals that all of the campers and counselors choose camp names, new identities that heighten the fun. His is Cheese, the counterpart of Mac, a.k.a. Jonathon Zuniga, Alsheikh’s freshman-year roommate and fellow counselor. While there are opportunities for campers to share their stories and talk about everything they are dealing with, for Alsheikh the magic of camp is that the kids can be regular kids, which often isn’t the case at home.

“It's really about the small, fun moments more than anything,” he explains. “The campers already know their situation at home and they don't always want to explore that further. I think they enjoy being with counselors and other campers who are there to have fun and offer support. It shows them that they can still have a light-hearted time despite whatever situation they’re in.”

Alsheikh joined Camp Kesem as a counselor during his freshman year so he could help kids who were dealing with circumstances beyond their control. The following year he wanted to learn more about the families, so he returned to camp as the outreach coordinator, who is the point of contact for all families. The next year, Alsheikh, along with Mac and Peaches (counselor and MIT senior Lizy Trujillo), co-directed the camp, leading a 13-member coordinating board that handles fundraising, developing programming, organizing events, and recruiting counselors.

This summer will be his final year with Camp Kesem, and he is excited to return as a counselor and focus on spending time with the kids. “Our campers are amazing,” he says. “They're sharing these things that I cannot even imagine having gone through, and the next day we're singing a camp song about Chocolate Oreos, and they’re just as into it as anyone else. Their resilience is unbelievable.”

The confidence to tackle any challenge

Alsheikh will graduate from MIT this June, and he hopes to pursue a master’s degree in computer science at MIT. His short-term goal is to explore topics that interest him and develop technical skills that he can utilize in different contexts; eventually he wants to use what he’s learned to help people as much as possible.

“Right now I'm just trying to build skills and learn more about different aspects of the world,” he says. “I've had exposure to a few different areas, and now I'm exploring computer science research to hopefully gain some technical rigor that I could apply elsewhere.”

For Alsheikh, one of the most important things he has gained while at MIT is the confidence to tackle any challenge. He has learned how to research a problem, ask the right questions, contact the right people, and quickly get up to speed so that he can attempt to solve it.

“Honestly, I think a lot of people are capable of tackling these problems, because often the resources are out there,” he explains. “But the confidence is a big deal … having the confidence to tackle things and knowing that you have just as good a chance as anybody else.”

With exponential growth, Camp Kesem at MIT prepares for its fifth session

Learning by teaching in a different culture