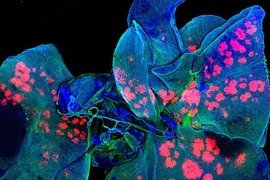 ↓ Download Image
Caption: A new report, “Convergence: The Future of Health,” draws on insights from scientists and researchers across academia, industry, and government. The cover of the report is an image of lungs, one of the major sites of metastasis. To help protect the lungs (blue) from this deadly process, bioengineers have created microscopic drug depots (red) to focus the effect of anti-cancer drugs that may have limited or toxic effects when delivered to the whole body

Caption:
A new report, “Convergence: The Future of Health,” draws on insights from scientists and researchers across academia, industry, and government. The cover of the report is an image of lungs, one of the major sites of metastasis. To help protect the lungs (blue) from this deadly process, bioengineers have created microscopic drug depots (red) to focus the effect of anti-cancer drugs that may have limited or toxic effects when delivered to the whole body
Credits:
Image: Gregory Szeto, Adelaide Tovar, Jeffrey Wyckoff, Irvine Laboratory/Koch Institute at MIT

What if lost limbs could be regrown? Cancers detected early with blood or urine tests, instead of invasive biopsies? Drugs delivered via nanoparticles to specific tissues or even cells, minimizing unwanted side effects? While such breakthroughs may sound futuristic, scientists are already exploring these and other promising techniques.

But the realization of these transformative advances is not guaranteed. The key to bringing them to fruition, a landmark new report argues, will be strategic and sustained support for “convergence”: the merging of approaches and insights from historically distinct disciplines such as engineering, physics, computer science, chemistry, mathematics, and the life sciences.

The report, “Convergence: The Future of Health,” was co-chaired by Tyler Jacks, the David H. Koch Professor of Biology and director of MIT’s Koch Institute for Integrative Cancer Research; Susan Hockfield, noted neuroscientist and president emerita of MIT; and Phillip Sharp, Institute Professor at MIT and Nobel laureate, and will be presented at the National Academies of Sciences, Engineering, and Medicine in Washington on June 24.

The report draws on insights from several dozen expert participants at two workshops, as well as input from scientists and researchers across academia, industry, and government. Their efforts have produced a wide range of recommendations for advancing convergence research, but the report emphasizes one critical barrier above all: the shortage of federal funding for convergence fields.

“Convergence science has advanced across many fronts, from nanotechnology to regenerative tissue,” says Sharp. “Although the promise has been recognized, the funding allocated for convergence research in biomedical science is small and needs to be expanded. In fact, there is no federal agency with the responsibility to fund convergence in biomedical research.”

The National Institutes of Health (NIH) are the primary source of research funding for biomedical science in the United States. In 2015, only 3 percent of all principal investigators funded by NIH were from departments of engineering, bioengineering, physics, biophysics, or mathematics. Accordingly, the report’s authors call for increasing NIH funding for convergence research to at least 20 percent of the agency’s budget.

In 2011, MIT released a white paper that outlined the concept of convergence. More than just interdisciplinary research, convergence entails the active integration of these diverse modes of inquiry into a unified pursuit of advances that will transform health and other sectors, from agriculture to energy.

The new report lays out a more comprehensive vision of what convergence-based research could achieve, as well as the concrete steps required to enable these advances.

“The 2011 report argued that convergence was the next revolution in health research, following molecular biology and genomics,” says Jacks. “That report helped identify the importance and growing centrality of convergence for health research. This report is different. It starts us off on a true strategy for convergence-based research in health.”

The report released today makes clear that, despite such obstacles, this “third revolution” is already well underway. Convergence-based research has become standard practice at MIT, most notably at the Koch Institute and the Institute for Medical Engineering and Science.

“About a third of all MIT engineers are involved in some aspect of convergence,” says Sharp. “These faculty are having an enormous impact on biomedical science and this will only grow in the future. Other universities are beginning to evolve along similar paths.”

Indeed, convergence-based approaches are becoming more common at many other pioneering university programs, including the Wyss Institute for Biologically Inspired Engineering at Harvard University, and the University of Chicago’s new Institute for Molecular Engineering, among others.

The report also points to several new federal initiatives that are harnessing the convergence research model to solve some of society’s most pressing health challenges.

For example, the Brain Research through Advancing Innovative Neurotechnologies (BRAIN) Initiative, launched by the Obama administration in 2013, seeks to improve our understanding of how individual cells and neural circuits interact, in order to develop new ways to treat and prevent brain disorders. And the National Cancer Moonshot Initiative, launched earlier this year to accelerate research to develop cancer vaccines and early detection methods and genomic tumor analysis, will also operate largely using convergence tools and approaches.

But the integration of new technologies and methods from genomics, information science, nanotechnology, and molecular biology could take us even farther.

A sampling gives a sense of their transformative potential. Convergence techniques could enable rewiring the genes of mosquitoes to eliminate Zika, dengue, and malaria. They could help solve the emerging threat of drug-resistant bacterial strains, which infect over two million people in the U.S. every year. Convergence-based immunotherapy could activate a person’s immune system to fight cancer, reprogramming a person’s T-cells or antibodies to find and attack tumor cells. Big-data techniques could be used to generate and analyze huge amounts of data on people’s exposures to industrial chemicals, environmental toxins, and infectious agents, creating a new field of “chemistry of nurture,” to complement the “chemistry of nature” developed by the documentation of the human genome.

“Convergence might come just in time,” says Hockfield, “given our rapidly aging population, increasing levels of chronic disease, and mounting healthcare costs due to demographic trends throughout the developed world. But we must overcome significant barriers to get to convergence.”

Realizing the full potential of the convergence revolution will require much more ambitious and strategic coordination and collaboration across industry, government, and academia, the report argues.

The report accordingly calls for a concerted joint effort by federal agencies, universities, and industry to develop a new strategic roadmap to support convergence-based research. As a concrete next step, the report’s authors recommend establishing an interagency working group on convergence with participation from NIH, the National Science Foundation, and other federal agencies involved in funding scientific research, such as the Food and Drug Administration and the Department of Energy.

If the potential of convergence is great, so are the stakes.

“Convergence has grown from a little seedling to a sprouting plant, but to become a great tree and orchard yielding fruit for decades into the future, it needs to be nourished, expanded, and cultivated now,” says Sharp. “Students need to be educated, collaborations need to be encouraged, and resources need to be committed to make sure convergence thrives.”

“This integration is important to deal with the great challenges of the future: continued growth in the accessibility and quality of healthcare, growth of the economy, and providing resources for future populations.”

Funding for the report was provided by the Raymond and Beverly Sackler Foundation, The Kavli Foundation, and the Burroughs Wellcome Fund.

Targeting cancer from many angles

The power of ‘convergence’