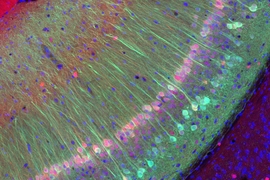 ↓ Download Image
Caption: MIT neuroscientists have identified neurons that are responsible for storing memories of familiar individuals. These cells, labeled green, are located in a region of the hippocampus known as the vCA1.
Credits: Courtesy of Teruhiro Okuyama

Caption:
MIT neuroscientists have identified neurons that are responsible for storing memories of familiar individuals. These cells, labeled green, are located in a region of the hippocampus known as the vCA1.
Credits:
Courtesy of Teruhiro Okuyama

Mice have brain cells that are dedicated to storing memories of other mice, according to a new study from MIT neuroscientists. These cells, found in a region of the hippocampus known as the ventral CA1, store “social memories” that help shape the mice’s behavior toward each other.

The researchers also showed that they can suppress or stimulate these memories by using a technique known as optogenetics to manipulate the cells that carry these memory traces, or engrams.

“You can change the perception and the behavior of the test mouse by either inhibiting or activating the ventral CA1 cells,” says Susumu Tonegawa, the Picower Professor of Biology and Neuroscience and director of the RIKEN-MIT Center for Neural Circuit Genetics at the Picower Institute for Learning and Memory.

Tonegawa is the senior author of the study, which appears in the Sept. 29 online edition of Science. MIT postdoc Teruhiro Okuyama is the paper’s lead author.

In a well-known study published in 2005, researchers at Caltech identified neurons in the human brain that respond specifically to images of celebrities such as Halle Berry or Brad Pitt, leading them to conclude that the brain has cells devoted to storing memories of people who are familiar.

The researchers set out to test this hypothesis using optogenetics: By engineering neurons of the ventral CA1 to express light-sensitive proteins, they could artificially activate or inhibit these cells by shining light on them as the mice interacted with each other.

First, the researchers allowed one mouse, known as the “test mouse,” to spend time with another mouse for two hours, letting the mice become familiar with each other. Soon after, the test mouse was placed in a cage with the familiar mouse and a new mouse.

Under normal circumstances, mice prefer to interact with mice they haven’t seen before. However, when the researchers used light to shut off a circuit that connects the ventral CA1 to another part of the brain called the nucleus accumbens, the test mouse interacted with both of the other mice equally, because its memory of the familiar mouse was blocked.

“The inhibition of ventral CA1 leads to impairment of the social memory,” Okuyama says. “They cannot show any preference for the novel mouse. They approach both mice equally.”

This effect was specific to social interactions: Interfering with the ventral CA1 did not have any effect on the mice’s ability to recognize objects or locations that they had previously seen.

When the researchers monitored activity of neurons in the ventral CA1, they found that after a mouse was familiarized with another mouse, a certain population of these neurons began to respond specifically to the familiar mouse.

These patterns could be seen even after the mice appeared to “forget” the once-familiar mice. After about 24 hours of separation, the test mice began to treat their former acquaintances as strangers, but the neurons that had been tuned to the familiar mice still fired, although not as frequently. This suggests that the memories are still being stored even though the test mice no longer appear to remember the mice they once knew.

Furthermore, the researchers were able to “re-awaken” these memories using optogenetics. In one experiment, when the test mouse first interacted with another mouse, the researchers used a light-sensitive protein called channelrhodopsin to tag only the ventral CA1 cells that were turned on by the familiarization treatment. When these neurons were re-activated with light 24 hours later, the memory of the once-familiar mouse returned. The researchers were also able to artificially link the memory of the familiar mouse with a positive or negative emotion.

Tonegawa’s lab has previously used this technique to identify hippocampal cells that store engrams representing episodic memories. The new study offers strong evidence that memory traces for specific individuals are being stored in the neurons of the ventral CA1, Tonegawa says. “There is some kind of persistent change that takes place in those cells as long as memory is still detectable,” he says.

Larry Young, a professor of psychiatry and director of the Center for Translational Social Science at Emory University, described the study as “one of the most fascinating papers related to social neuroscience I’ve ever seen.”

“In this paper, they identified a subset of cells in a particular brain region that is the engram — a set of cells that through its connections in the nucleus accumbens, actually holds the memory of another individual,” says Young, who was not involved in the study. “They showed that the same group of neurons fired repeatedly in response to the same animal, which is absolutely incredible. Then to go in and control those specific cells is really on the cutting edge.”

The MIT researchers are now investigating a possible link between social memory and autism. Some people with autism have a mutation of the receptor for a hormone called oxytocin, which is abundant on the surface of ventral CA1 cells. Tonegawa’s lab hopes to uncover whether these mutations might impair social interactions.

The research was funded by the RIKEN Brain Science Institute, the Howard Hughes Medical Institute, the JPB Foundation, and the Japan Society for the Promotion of Science.

A study by MIT researchers is providing more information about how the brain stores and processes social memories, writes Hallie Smith for Boston Magazine. Smith explains that, in the future, the findings may be applicable to autism research and therapy.