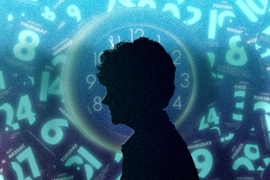 ↓ Download Image
Caption: Researchers say the findings raise the possibility of developing future treatments that might reverse some of the memory loss seen in early-stage Alzheimer’s.
Credits: Illustration: Jose-Luis Olivares/MIT 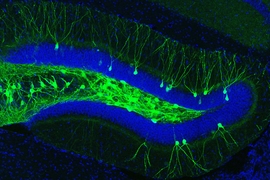 ↓ Download Image
Caption: In this image of the hippocampal dentate gyrus of a mouse model of early Alzheimer’s disease, engram cells (green) that encode a fear memory were tagged with the light-sensitive protein channelrhodopsin-2.

Caption:
Researchers say the findings raise the possibility of developing future treatments that might reverse some of the memory loss seen in early-stage Alzheimer’s.
Credits:
Illustration: Jose-Luis Olivares/MIT

Caption:
In this image of the hippocampal dentate gyrus of a mouse model of early Alzheimer’s disease, engram cells (green) that encode a fear memory were tagged with the light-sensitive protein channelrhodopsin-2.
Credits:
Image: Dheeraj Roy

In the early stages of Alzheimer’s disease, patients are often unable to remember recent experiences. However, a new study from MIT suggests that those memories are still stored in the brain — they just can’t be easily accessed.

The MIT neuroscientists report in Nature that mice in the early stages of Alzheimer’s can form new memories just as well as normal mice but cannot recall them a few days later.

Furthermore, the researchers were able to artificially stimulate those memories using a technique known as optogenetics, suggesting that those memories can still be retrieved with a little help. Although optogenetics cannot currently be used in humans, the findings raise the possibility of developing future treatments that might reverse some of the memory loss seen in early-stage Alzheimer’s, the researchers say.

“The important point is, this a proof of concept. That is, even if a memory seems to be gone, it is still there. It’s a matter of how to retrieve it,” says Susumu Tonegawa, the Picower Professor of Biology and Neuroscience and director of the RIKEN-MIT Center for Neural Circuit Genetics at the Picower Institute for Learning and Memory.

Tonegawa is the senior author of the study, which appears in the March 16 online edition of Nature. Dheeraj Roy, an MIT graduate student, is the paper’s lead author.

In recent years, Tonegawa’s lab has identified cells in the brain’s hippocampus that store specific memories. The researchers have also shown that they can manipulate these memory traces, or engrams, to plant false memories, activate existing memories, or alter a memory’s emotional associations.

Last year, Tonegawa, Roy, and colleagues found that mice with retrograde amnesia, which follows traumatic injury or stress, had impaired memory recall but could still form new memories. That led the team to wonder whether this might also be true for the memory loss seen in the early stages of Alzheimer’s disease, which occurs before characteristic amyloid plaques appear in patients’ brains.

To investigate that possibility, the researchers studied two different strains of mice genetically engineered to develop Alzheimer’s symptoms, plus a group of healthy mice.

“Short-term memory seems to be normal, on the order of hours. But for long-term memory, these early Alzheimer’s mice seem to be impaired,” Roy says.

The researchers then showed that while the mice cannot recall their experiences when prompted by natural cues, those memories are still there.

To demonstrate this, they first tagged the engram cells associated with the fearful experience with a light-sensitive protein called channelrhodopsin, using a technique they developed in 2012. Whenever these tagged engram cells are activated by light, normal mice recall the memory encoded by that group of cells. Likewise, when the researchers placed the Alzheimer’s mice in a chamber they had never seen before and shined light on the engram cells encoding the fearful experience, the mice immediately showed fear.

“Directly activating the cells that we believe are holding the memory gets them to retrieve it,” Roy says. “This suggests that it is indeed an access problem to the information, not that they’re unable to learn or store this memory.”

The researchers also showed that the engram cells of Alzheimer’s mice had fewer dendritic spines, which are small buds that allow neurons to receive incoming signals from other neurons.

Normally, when a new memory is generated, the engram cells corresponding to that memory grow new dendritic spines, but this did not happen in the Alzheimer’s mice. This suggests that the engram cells are not receiving sensory input from another part of the brain called the entorhinal cortex. The natural cue that should reactivate the memory — being in the chamber again — has no effect because the sensory information doesn’t get into the engram cells.

“If we want to recall a memory, the memory-holding cells have to be reactivated by the correct cue. If the spine density does not go up during learning process, then later, if you give a natural recall cue, it may not be able to reach the nucleus of the engram cells,” Tonegawa says.

“This is a remarkable study providing the first proof that the earliest memory deficit in Alzheimer’s involves retrieval of consolidated information,” says Rudolph Tanzi, a professor of neurology at Harvard Medical School, who was not involved in the research. “As a result, the implications for treatment of memory deficits Alzheimer’s disease based on strengthening synapses are extremely exciting.”

The researchers were also able to induce a longer-term reactivation of the “lost” memories by stimulating new connections between the entorhinal cortex and the hippocampus.

To achieve this, they used light to optogenetically stimulate entorhinal cortex cells that feed into the hippocampal engram cells encoding the fearful memory. After three hours of this treatment, the researchers waited a week and tested the mice again. This time, the mice could retrieve the memory on their own when placed in the original chamber, and they had many more dendritic spines on their engram cells.

However, this approach does not work if too large a section of the entorhinal cortex is stimulated, suggesting that any potential treatments for human patients would have to be very targeted. Optogenetics is very precise but too invasive to use in humans, and existing methods for deep brain stimulation — a form of electrical stimulation sometimes used to treat Parkinson’s and other diseases — affect too much of the brain.

“It’s possible that in the future some technology will be developed to activate or inactivate cells deep inside the brain, like the hippocampus or entorhinal cortex, with more precision,” Tonegawa says. “Basic research as conducted in this study provides information on cell populations to be targeted, which is critical for future treatments and technologies.”

The Boston Globe Magazine’s list of some of the most innovative ideas, people, and companies of 2016 features graduate student Dheeraj Roy, whose research suggests that one day optogenetics could potentially be used to help stimulate memories in patients with Alzheimer’s disease.

MIT researchers have shown that memories can be restored using optogenetics, findings that could help treat Alzheimer’s. According to The Economist, the findings provide evidence “about how memories are lost during the early stages of the disease and may point to how…those memories might be brought back.”

A new study conducted by MIT researchers suggests that optogenetics could one day be used to help stimulate lost memories in Alzheimer’s patients, reports Ashley Welch for CBS News. Walsh writes that the researchers have “found evidence that ‘lost’ memories may just be inaccessible, with the potential to be retrieved.”

Huffington Post reporter Ann Brenoff writes about a new MIT study that finds that Alzheimer’s patients may one day be able to recover lost memories using optogenetics. “The findings raise the hope — and possibility — that future treatments might indeed reverse some of the memory loss in early-stage Alzheimer’s patients.”

In an article posted by Scientific American, Sara Reardon writes that MIT researchers have shown that patients with Alzheimer’s can still form new memories and that lost memories could potentially be recalled using optogenetics. The findings “may allow more targeted stimulation, especially once researchers understand what happens to memories after they leave the hippocampus.”

Washington Post reporter Ariana Eunjung Cha writes that MIT researchers have found evidence that memories lost due to Alzheimer’s disease could potentially be recalled using optogenetics. Cha writes that the research “raises the hope of future treatments that could reverse some of the ravages of the disease on memory.”

MIT researchers have found that cell stimulation may one day be a tool in helping Alzheimer’s patients recall lost memories, according to The Guardian. The findings raise “the possibility of future treatments that reverse memory loss in early stages of the disease.”

CBS Boston reports on a new study by MIT researchers that shows that memories lost due to Alzheimer’s disease may be recovered. The research shows “that while it may be hard for people with early Alzheimer’s to access memories, they are still retrievable.”