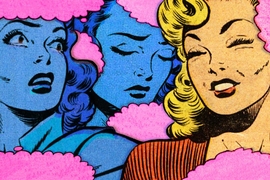 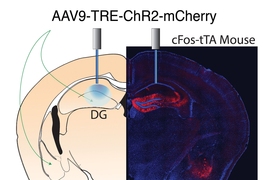 ↓ Download Image
Caption: This image depicts the injection sites and the expression of the viral constructs in the two areas of the brain studied: the Dentate Gyrus of the hippocampus (middle) and the Basolateral Amygdala (bottom corners).

Caption:
This image depicts the injection sites and the expression of the viral constructs in the two areas of the brain studied: the Dentate Gyrus of the hippocampus (middle) and the Basolateral Amygdala (bottom corners).
Credits:
Image courtesy of the researchers

Most memories have some kind of emotion associated with them: Recalling the week you just spent at the beach probably makes you feel happy, while reflecting on being bullied provokes more negative feelings.

A new study from MIT neuroscientists reveals the brain circuit that controls how memories become linked with positive or negative emotions. Furthermore, the researchers found that they could reverse the emotional association of specific memories by manipulating brain cells with optogenetics — a technique that uses light to control neuron activity.

The findings, described in the Aug. 27 issue of Nature, demonstrated that a neuronal circuit connecting the hippocampus and the amygdala plays a critical role in associating emotion with memory. This circuit could offer a target for new drugs to help treat conditions such as post-traumatic stress disorder, the researchers say.

“In the future, one may be able to develop methods that help people to remember positive memories more strongly than negative ones,” says Susumu Tonegawa, the Picower Professor of Biology and Neuroscience, director of the RIKEN-MIT Center for Neural Circuit Genetics at MIT’s Picower Institute for Learning and Memory, and senior author of the paper.

The paper’s lead authors are Roger Redondo, a Howard Hughes Medical Institute postdoc at MIT, and Joshua Kim, a graduate student in MIT’s Department of Biology.

Memories are made of many elements, which are stored in different parts of the brain. A memory’s context, including information about the location where the event took place, is stored in cells of the hippocampus, while emotions linked to that memory are found in the amygdala.

Previous research has shown that many aspects of memory, including emotional associations, are malleable. Psychotherapists have taken advantage of this to help patients suffering from depression and post-traumatic stress disorder, but the neural circuitry underlying such malleability is not known.

In this study, the researchers set out to explore that malleability with an experimental technique they recently devised that allows them to tag neurons that encode a specific memory, or engram. To achieve this, they label hippocampal cells that are turned on during memory formation with a light-sensitive protein called channelrhodopsin. From that point on, any time those cells are activated with light, the mice recall the memory encoded by that group of cells.

Last year, Tonegawa’s lab used this technique to implant, or “incept,” false memories in mice by reactivating engrams while the mice were undergoing a different experience. In the new study, the researchers wanted to investigate how the context of a memory becomes linked to a particular emotion. First, they used their engram-labeling protocol to tag neurons associated with either a rewarding experience (for male mice, socializing with a female mouse) or an unpleasant experience (a mild electrical shock). In this first set of experiments, the researchers labeled memory cells in a part of the hippocampus called the dentate gyrus.

Two days later, the mice were placed into a large rectangular arena. For three minutes, the researchers recorded which half of the arena the mice naturally preferred. Then, for mice that had received the fear conditioning, the researchers stimulated the labeled cells in the dentate gyrus with light whenever the mice went into the preferred side. The mice soon began avoiding that area, showing that the reactivation of the fear memory had been successful.

The reward memory could also be reactivated: For mice that were reward-conditioned, the researchers stimulated them with light whenever they went into the less-preferred side, and they soon began to spend more time there, recalling the pleasant memory.

A couple of days later, the researchers tried to reverse the mice’s emotional responses. For male mice that had originally received the fear conditioning, they activated the memory cells involved in the fear memory with light for 12 minutes while the mice spent time with female mice. For mice that had initially received the reward conditioning, memory cells were activated while they received mild electric shocks.

Next, the researchers again put the mice in the large two-zone arena. This time, the mice that had originally been conditioned with fear and had avoided the side of the chamber where their hippocampal cells were activated by the laser now began to spend more time in that side when their hippocampal cells were activated, showing that a pleasant association had replaced the fearful one. This reversal also took place in mice that went from reward to fear conditioning.

The researchers then performed the same set of experiments but labeled memory cells in the basolateral amygdala, a region involved in processing emotions. This time, they could not induce a switch by reactivating those cells — the mice continued to behave as they had been conditioned when the memory cells were first labeled.

This suggests that emotional associations, also called valences, are encoded somewhere in the neural circuitry that connects the dentate gyrus to the amygdala, the researchers say. A fearful experience strengthens the connections between the hippocampal engram and fear-encoding cells in the amygdala, but that connection can be weakened later on as new connections are formed between the hippocampus and amygdala cells that encode positive associations.

“That plasticity of the connection between the hippocampus and the amygdala plays a crucial role in the switching of the valence of the memory,” Tonegawa says.

These results indicate that while dentate gyrus cells are neutral with respect to emotion, individual amygdala cells are precommitted to encode fear or reward memory. The researchers are now trying to discover molecular signatures of these two types of amygdala cells. They are also investigating whether reactivating pleasant memories has any effect on depression, in hopes of identifying new targets for drugs to treat depression and post-traumatic stress disorder.

David Anderson, a professor of biology at the California Institute of Technology, says the study makes an important contribution to neuroscientists’ fundamental understanding of the brain and also has potential implications for treating mental illness.

“This is a tour de force of modern molecular-biology-based methods for analyzing processes, such as learning and memory, at the neural-circuitry level. It’s one of the most sophisticated studies of this type that I’ve seen,” he says.

The research was funded by the RIKEN Brain Science Institute, Howard Hughes Medical Institute, and the JPB Foundation.

Philip Ball of The Guardian speaks with graduate student Steve Ramirez about the potential for neuroscientist to one day be able to replace bad memories with good ones. “I see a world where we can reactivate any kind of memory we like, or erase unwanted memories,” says Ramirez.

The BBC’s Science Hour highlights new MIT research exploring how emotions are linked to memories. Researchers found that the emotional associations of specific memories could be reversed in mice.

Amina Khan of the Los Angeles Times explores new MIT research into how the brain links memories with positive and negative emotions. “Recording memory is not like playing a tape recorder, but it is a creative process -- sometimes even leading to an entirely false memory,” explains Prof. Susumu Tonegawa.

Emily Tamkin of Slate writes about how MIT scientists have developed a technique to manipulate the emotional associations linked with memories in mice. “Scientists are excited by the potential impact these findings could have on, for example, treatment of post-traumatic stress disorder,” writes Tamkin.

MIT scientists have uncovered how memories are linked with positive and negative emotions, reports Dennis Thompson for CBS News. "The memory information stored is not only about what happened, but also about the context in which the event occurred," says Professor Susumu Tonegawa.

Reuters reporter Sharon Begley writes about the new MIT study showing that memories can be rewired in the brain. "We could switch the mouse's memory from positive emotions to negative, and negative to positive," says Professor Susumu Tonegawa of the research.

A team led by Professor Susumu Tonegawa effectively manipulated the emotions associated with certain memories in mice, reports Jonathan Webb of BBC News. “By artificially activating circuits in the brain, scientists have turned negative memories into positive ones,” writes Webb.

Writing for Wired, Greg Miller explores new MIT research into the emotional association of memories. “This study and others like it are illuminating the neural mechanisms of memory in unprecedented detail, and showing that it’s possible to activate, alter, or even create memories just by tweaking the right neurons,” writes Miller.

Penny Sarchet writes for New Scientist about how MIT researchers have successfully altered emotions associated with specific memories in mice. "Emotion is intimately associated with the memory of past events and episodes, and yet, the emotional value of the memories is malleable," says Professor Susumu Tonegawa.

Gautam Naik of The Wall Street Journal writes about new MIT research showing how the brain associates memories with emotion and that circuits in the brain could potentially be rewired to change bad memories to good ones. "We identified the circuit, and we've showed that we can manipulate such circuits artificially," says Dr. Roger Redondo.

Carolyn Johnson writes for The Boston Globe about Professor Susumu Tonegawa’s research into rewiring memories in rodents. “That adds to a body of research from MIT over recent years that has shown that administering a drug can wipe out a negative memory in mice,” writes Johnson.

Washington Post reporter Rachel Feltman examines how MIT researchers have uncovered the brain circuitry that links memories to emotion and how to manipulate it. In rodent tests, “neurons that had once conjured up fearful memories had been switched to pleasant ones,” writes Feltman of the MIT study.