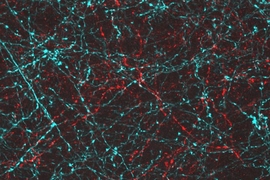 ↓ Download Image
Caption: MIT-led researchers engineered neurons so they can be activated with either blue or red light, allowing each population to be controlled separately.
Credits: Image: Yasunobu Murata/McGovern Institute 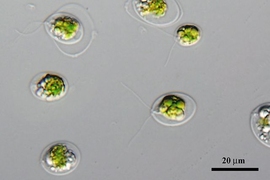 Caption:
MIT-led researchers engineered neurons so they can be activated with either blue or red light, allowing each population to be controlled separately.
Credits:
Image: Yasunobu Murata/McGovern Institute

Caption:
Scientists discovered an opsin sensitive to red light in this algae, called Chlamydomonas noctigama.
Credits:
Image: CCALA Culture Collection of Autotrophic Organisms
Optogenetics is a technique that allows scientists to control neurons’ electrical activity with light by engineering them to express light-sensitive proteins. Within the past decade, it has become a very powerful tool for discovering the functions of different types of cells in the brain.

Most of these light-sensitive proteins, known as opsins, respond to light in the blue-green range. Now, a team led by MIT has discovered an opsin that is sensitive to red light, which allows researchers to independently control the activity of two populations of neurons at once, enabling much more complex studies of brain function.

“If you want to see how two different sets of cells interact, or how two populations of the same cell compete against each other, you need to be able to activate those populations independently,” says Ed Boyden, an associate professor of biological engineering and brain and cognitive sciences at MIT and a senior author of the new study.

The new opsin is one of about 60 light-sensitive proteins found in a screen of 120 species of algae. The study, which appears in the Feb. 9 online edition of Nature Methods, also yielded the fastest opsin, enabling researchers to study neuron activity patterns with millisecond timescale precision.

Boyden and Gane Ka-Shu Wong, a professor of medicine and biological sciences at the University of Alberta, are the paper’s senior authors, and the lead author is MIT postdoc Nathan Klapoetke. Researchers from the Howard Hughes Medical Institute’s Janelia Farm Research Campus, the University of Pennsylvania, the University of Cologne, and the Beijing Genomics Institute also contributed to the study.

Opsins occur naturally in many algae and bacteria, which use the light-sensitive proteins to help them respond to their environment and generate energy.

To achieve optical control of neurons, scientists engineer brain cells to express the gene for an opsin, which transports ions across the cell’s membrane to alter its voltage. Depending on the opsin used, shining light on the cell either lowers the voltage and silences neuron firing, or boosts voltage and provokes the cell to generate an electrical impulse. This effect is nearly instantaneous and easily reversible.

Using this approach, researchers can selectively turn a population of cells on or off and observe what happens in the brain. However, until now, they could activate only one population at a time, because the only opsins that responded to red light also responded to blue light, so they couldn’t be paired with other opsins to control two different cell populations.

To seek additional useful opsins, the MIT researchers worked with Wong’s team at the University of Alberta, which is sequencing the transcriptomes of 1,000 plants, including some algae. (The transcriptome is similar to the genome but includes only the genes that are expressed by a cell, not the entirety of its genetic material.)

Once the team obtained genetic sequences that appeared to code for opsins, Klapoetke tested their light-responsiveness in mammalian brain tissue, working with Martha Constantine-Paton, an MIT professor of brain and cognitive sciences and of biology, a member of the McGovern Institute, and an author of the paper. The red-light-sensitive opsin, which the researchers named Chrimson, can mediate neural activity in response to light with a 735-nanometer wavelength.

The researchers also discovered a blue-light-driven opsin that has two highly desirable traits: It operates at high speed, and it is sensitive to very dim light. This opsin, called Chronos, can be stimulated with levels of blue light that are too weak to activate Chrimson.

“You can use short pulses of dim blue light to drive the blue one, and you can use strong red light to drive Chrimson, and that allows you to do true two-color, zero-cross-talk activation in intact brain tissue,” says Boyden, who is a member of MIT’s Media Lab and the McGovern Institute for Brain Research.

Researchers had previously tried to modify naturally occurring opsins to make them respond faster and react to dimmer light, but trying to optimize one feature often made other features worse.

“It was apparent that when trying to engineer traits like color, light sensitivity, and kinetics, there are always tradeoffs,” Klapoetke says. “We’re very lucky that something natural actually was more than several times faster and also five or six times more light-sensitive than anything else.”

These new opsins lend themselves to several types of studies that were not possible before, Boyden says. For one, scientists could not only manipulate activity of a cell population of interest, but also control upstream cells that influence the target population by secreting neurotransmitters.

Pairing Chrimson and Chronos could also allow scientists to study the functions of different types of cells in the same microcircuit within the brain. Such cells are usually located very close together, but with the new opsins they can be controlled independently with two different colors of light.

“I think the tools described in this excellent paper represent a major advance for both basic and translational neuroscience,” says Botond Roska, a senior group leader at the Friedrich Miescher Institute for Biomedical Research in Switzerland, who was not part of the research team. “Optogenetic tools that are shifted towards the infrared range, such as Chrimson described in this paper, are much better than the more blue-shifted variants since these are less toxic, activate less the pupillary reflex, and activate less the remaining photoreceptors of patients.”

Most optogenetic studies thus far have been done in mice, but Chrimson could be used for optogenetic studies of fruit flies, a commonly used experimental organism. Researchers have had trouble using blue-light-sensitive opsins in fruit flies because the light can get into the flies’ eyes and startle them, interfering with the behavior being studied.

Vivek Jayaraman, a research group leader at Janelia Farms and an author of the paper, was able to show that this startle response does not occur when red light is used to stimulate Chrimson in fruit flies.

Because red light is less damaging to tissue than blue light, Chrimson also holds potential for eventual therapeutic use in humans, Boyden says. Animal studies with other opsins have shown promise in helping to restore vision after the loss of photoreceptor cells in the retina.

The researchers are now trying to modify Chrimson to respond to light in the infrared range. They are also working on making both Chrimson and Chronos faster and more light sensitive.