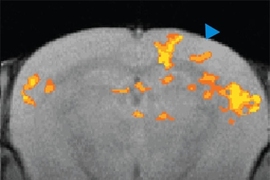 Caption:
This image shows a map of neural activity in the awake mouse brain, top, and pattern of brain communication when the sensory projection neurons are optically driven, bottom. The hotter colors indicate higher correlation.
Credits:
Images: Mitul Desai, Itamar Kahn, Ed Boyden and Chris Moore
There are about 100 billion neurons in the human brain, and each one belongs to elaborate networks that control our behavior, thoughts and emotions. A message from a single neuron can have far-reaching consequences in other brain areas, but those connections are difficult to decipher with current technology.

To help map those networks, a team of researchers from MIT, Harvard, Boston University and Tufts University has now developed a way to selectively activate neurons in the awake mouse brain with light and then track the resulting activity in other brain regions, using a brain-scanning technique called functional magnetic resonance imaging (fMRI).

By comparing this data to human fMRI brain scans, researchers could learn a great deal about the underlying brain circuits involved in disorders such as epilepsy, schizophrenia, autism and post-traumatic stress disorder.

“In all of these cases, being able to link the human neuroimaging data to the actual circuit elements that generate those patterns could be very powerful,” says Edward Boyden, an associate professor in MIT’s Media Lab and co-senior author of a paper describing the new approach in the Dec. 15 online edition of the Journal of Neurophysiology.

The new technique, called opto-fMRI, builds on optogenetics — the genetic engineering of cells to respond to light, which allows scientists to selectively stimulate or silence individual nerve cells. Optogenetics was pioneered by the Boyden lab and colleagues over the past several years, and in 2010, the journal Nature Methods named it “Method of the Year.”

To create cells that can be controlled by light, the target cells are genetically engineered to produce proteins called channelrhodopsins, which sit in the cell membrane. Those channels control the flow of ions (charged molecules) into the cell. Pumping positive ions into a neuron changes its voltage, which then activates it.

Boyden, who is also an associate professor of brain and cognitive sciences and of biological engineering, realized that combining optogenetics with fMRI could allow him to not only control neurons, but also to determine how those neurons influence other targets in the brain. To make that connection, Boyden teamed up with Chris Moore, associate professor of brain and cognitive sciences at MIT and an expert in using fMRI to study sensory perception.

fMRI is a brain-imaging technique that allows scientists to see blood flow in the brain, which indicates activity in those regions. Neuroscientists use it to identify parts of the brain that are active during certain behaviors, or impaired in people with neurological disorders. fMRI enables the measurement of activity throughout the awake brain, providing the unique opportunity to assess a whole working brain at once.

The new paper marks the first time anyone has used optogenetics and fMRI to study awake mice. (A previous study looked at anesthetized animals.) Working with awake animals is more difficult because if the animal’s head is moving, the resulting MRI image will be blurry. To overcome that, the researchers created a new experimental setup in which they can secure the animal’s head in place during scanning.

“That’s a very big step, because otherwise you’re going to get very different answers, if you look at anesthetized animals only,” says Bruce Hope, senior scientist at the National Institute on Drug Abuse.

Boyden, Moore and colleagues also developed software that can analyze the fMRI data and calculate the underlying brain networks involved in the response. “That allows us to survey these neural networks in an unbiased way,” says Boyden. “We can drive a neuron and see what networks are downstream of it, which is really powerful.”

To test their system, the researchers inserted channelrhodopsins into neurons in the brain’s primary sensory cortex, which interprets sensations of touch and pain. Using fMRI, they found that after those neurons were activated with light, secondary sensory cortex, where additional sensory processing takes place, and primary motor cortex, which controls body movements, also became active. That result is consistent with a previously known neural circuit.

In future work, this technique could be used to study neurological conditions for which there is a lot of human fMRI data but little is known about the underlying neural circuits that control brain activity. Boyden believes this kind of work could eventually lead to new pharmaceuticals that target a specific circuit, rather than a specific molecule.

In the Journal of Neurophysiology study, Boyden used an implantable light source that directs light to only one target. However, in collaboration with MIT Vitesse Professor of Electrical Engineering and Computer Science Clif Fonstad, Boyden has also developed a probe that can deliver light to multiple sites. The new microfabricated device has 12 parallel light guides, each ending at a different spot, so they can be used to control different neurons.

Using this probe, described in a recent issue of the journal Optics Letters, each light source can be controlled separately. That could be important if this technology is ever developed into medical devices for humans. “From a prosthetics standpoint, the ability to enter information into multiple sites, while minimizing brain damage, is very valuable,” says Boyden.

In future studies, he would like to combine the new multiple-fiber probe with the fMRI techniques. This would allow scientists to create more comprehensive 3-D maps of the brain by measuring the roles of multiple regions in a circuit.

“We could perturb one site, observe which downstream sites are activated, and then perturb those downstream sites, iterating through the circuit in order to reveal how they all work together,” he says.

The lead authors on the studies are Mitul Desai and Itamar Kahn for the opto-fMRI paper, and Anthony Zorzos for the microfabricated waveguide paper. Other contributing authors to the studies include Ulf Knoblich, Jake Bernstein, Hisham Atallah, Aimei Yang, Nancy Kopell, Randy Buckner and Ann Graybiel.