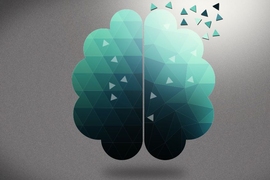 Memories that have been “lost” as a result of amnesia can be recalled by activating brain cells with light.

In a paper published today in the journal Science, researchers at MIT reveal that they were able to reactivate memories that could not otherwise be retrieved, using a technology known as optogenetics.

The finding answers a fiercely debated question in neuroscience as to the nature of amnesia, according to Susumu Tonegawa, the Picower Professor in MIT’s Department of Biology and director of the RIKEN-MIT Center at the Picower Institute for Learning and Memory, who directed the research by lead authors Tomas Ryan, Dheeraj Roy, and Michelle Pignatelli.

Neuroscience researchers have for many years debated whether retrograde amnesia — which follows traumatic injury, stress, or diseases such as Alzheimer’s — is caused by damage to specific brain cells, meaning a memory cannot be stored, or if access to that memory is somehow blocked, preventing its recall.

“The majority of researchers have favored the storage theory, but we have shown in this paper that this majority theory is probably wrong,” Tonegawa says. “Amnesia is a problem of retrieval impairment.”

Memory researchers have previously speculated that somewhere in the brain network is a population of neurons that are activated during the process of acquiring a memory, causing enduring physical or chemical changes.

If these groups of neurons are subsequently reactivated by a trigger such as a particular sight or smell, for example, the entire memory is recalled. These neurons are known as “memory engram cells.”

In 2012 Tonegawa’s group used optogenetics — in which proteins are added to neurons to allow them to be activated with light — to demonstrate for the first time that such a population of neurons does indeed exist in an area of the brain called the hippocampus.

However, until now no one has been able to show that these groups of neurons do undergo enduring chemical changes, in a process known as memory consolidation. One such change, known as “long-term potentiation” (LTP), involves the strengthening of synapses, the structures that allow groups of neurons to send signals to each other, as a result of learning and experience.

To find out if these chemical changes do indeed take place, the researchers first identified a group of engram cells in the hippocampus that, when activated using optogenetic tools, were able to express a memory.

When they then recorded the activity of this particular group of cells, they found that the synapses connecting them had been strengthened. “We were able to demonstrate for the first time that these specific cells — a small group of cells in the hippocampus — had undergone this augmentation of synaptic strength,” Tonegawa says.

The researchers then attempted to discover what happens to memories without this consolidation process. By administering a compound called anisomycin, which blocks protein synthesis within neurons, immediately after mice had formed a new memory, the researchers were able to prevent the synapses from strengthening.

When they returned one day later and attempted to reactivate the memory using an emotional trigger, they could find no trace of it. “So even though the engram cells are there, without protein synthesis those cell synapses are not strengthened, and the memory is lost,” Tonegawa says.

But startlingly, when the researchers then reactivated the protein synthesis-blocked engram cells using optogenetic tools, they found that the mice exhibited all the signs of recalling the memory in full.

“If you test memory recall with natural recall triggers in an anisomycin-treated animal, it will be amnesiac, you cannot induce memory recall,” Tonegawa says. “But if you go directly to the putative engram-bearing cells and activate them with light, you can restore the memory, despite the fact that there has been no LTP.”

Further studies carried out by Tonegawa’s group demonstrated that memories are stored not in synapses strengthened by protein synthesis in individual engram cells, but in a circuit, or “pathway” of multiple groups of engram cells and the connections between them.

“We are proposing a new concept, in which there is an engram cell ensemble pathway, or circuit, for each memory,” he says. “This circuit encompasses multiple brain areas and the engram cell ensembles in these areas are connected specifically for a particular memory.”

The research dissociates the mechanisms used in memory storage from those of memory retrieval, according to Ryan. “The strengthening of engram synapses is crucial for the brain’s ability to access or retrieve those specific memories, while the connectivity pathways between engram cells allows the encoding and storage of the memory information itself,” he says.

Changes in synaptic strength and in spine properties have long been associated with learning and memory, according to Alcino Silva, director of the Integrative Center for Learning and Memory at the University of California at Los Angeles. “This groundbreaking paper suggests that these changes may not be as critical for memory as once thought, since under certain conditions, it seems to be possible to disrupt these changes and still preserve memory,” he says. “Instead, it appears that these changes may be needed for memory retrieval, a mysterious process that has so far evaded neuroscientists.”

Jessica Hamzelou writes for New Scientist that MIT researchers have been able to recover memories using light. The technique could eventually be used to help people with Alzheimer’s or amnesia. Hamzelou writes that Prof. Susumu Tonegawa, hopes to “develop a way to reactivate forgotten memories in people before the brain tissue itself is damaged, as is often the case in dementia.”

According to AFP, MIT researchers were able to use a technology called optogenetics to retrieve lost memories. Professor Susumu Tonegawa explains that the research showed, “past memories may not be erased, but could simply be lost and inaccessible for recall."

Washington Post reporter Rachel Feltman writes that MIT researchers have used optogenetics to reactive lost memories. The research indicates that, “retrograde amnesia -- where memories are lost after brain trauma -- may be more of a memory retrieval problem than an actual loss of data.”

Graduate student Dheeraj Roy speaks with Rachel Paiste of WBUR about a new study that indicates that memories lost to amnesia may be recalled by activating brain cells with light. Roy explains that the findings show that “in certain models of amnesia, memories do persist.”

Pinpointing the 'oops' moment in the brain