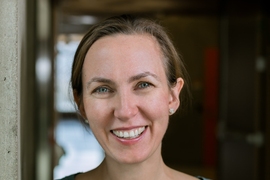 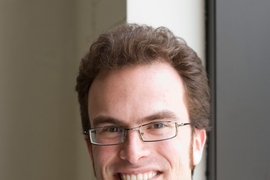 The award was established in 1982 as a tribute to Institute Professor Emeritus Harold E. Edgerton, for his active support for younger, untenured faculty members. Each year, a faculty committee presents the award to one or more junior members of the faculty, in recognition of exceptional distinctions in teaching, research, and scholarship.

Ribbeck received her bachelor’s and PhD degrees in biology at the University of Heidelberg, Germany, and worked as a postdoc at the European Molecular Biology Laboratory in Heidelberg before continuing as a postdoc in the Department of Systems Biology at Harvard Medical School. In 2007, as a Bauer Fellow at Harvard University’s FAS Center for Systems Biology, Ribbeck established an independent research program to explore the ways in which proteins — and viruses and bacteria — cross key biological barriers to enter the body. In 2010, she joined MIT as a faculty member in the Department of Biological Engineering.

Since then, Ribbeck has concentrated on understanding the basic mechanisms of critical biological barriers such as mucus — the thick, slimy secretions that lubricate and protect all internal linings of the body, including the respiratory and gastrointestinal systems, from infectious agents. Her lab is investigating the ways in which mucus prevents and permits passage of certain molecules and pathogens into cells. In one of her projects, Ribbeck is researching the properties and functions of cervical mucus associated with preterm birth.

According to the award citation, Ribbeck has also shown “an energetic and deep commitment to public outreach.” Through a children’s book and TED-Ed video geared toward a lay audience, Ribbeck has presented the ways in which mucus and other biological barriers play a role in both maintaining and compromising health.

In 2014, she was named one of Popular Science’s Brilliant Ten, which honors “the brightest young minds reshaping science, engineering, and the world.” She has also received the John Kendrew Young Scientist Award from the European Molecular Biology Laboratory and an NSF CAREER Award, as well as an NSF Materials Research Science and Engineering Center award.

“Katharina has demonstrated herself to be the epitome of MIT’s best aspirations, by her fearless and creative research advances, dedicated and effective teaching and mentoring, and caring and energetic campus service,” says Doug Lauffenburger, the Ford Professor and head of the Department of Biological Engineering.

Ribbeck has also made a significant mark on MIT’s teaching program in bioengineering, for which she received the School of Engineering’s Junior Bose Award for Excellence in Teaching in 2015. Since 2011, she has lived with students in Simmons Hall, where she serves as a residential scholar. As an advisor to freshman since 2013, Ribbeck worked with MIT Medical staff members to develop a freshman seminar on mindfulness and stress reduction.

“I am deeply grateful to receive this prestigious award,” Ribbeck says. “It is as much an honor for my students, who have brought a bold vision to life by courageously charting new scientific territory. I also wish to thank my colleagues who have enabled much of our work through their support and engagement.”

Jesse Thaler received a bachelor of science in math/physics from Brown University, and a PhD in physics from Harvard University. He then worked as a postdoc at the Miller Institute for Basic Research in Science at the University of California at Berkeley, and Lawrence Berkeley National Laboratory. In 2010, he joined the MIT faculty as a theoretical particle physicist in the Department of Physics.

Thaler’s research centers on the Large Hadron Collider (LHC) experiment at CERN, in Geneva, Switzerland. The LHC — the largest, most powerful particle accelerator in the world — was instrumental to the discovery of the Higgs boson, which was the last particle predicted to exist by the Standard Model of physics. Thaler is looking beyond the Standard Model to understand phenomena that the model cannot explain, such as dark matter, the apparent weakness of gravity, and the symmetries of the universe.

His work has had a major impact on several areas of physics, including the development of new techniques to study jets of hadrons and other particles in the LHC and other particle accelerators. Thaler has also created innovative models for dark matter and made theoretical advances in the study of supersymmetry — the idea that there may be a mirror world of elementary particles, that may account for phenomena that cannot be explained by the Standard Model.

“Jesse has made strides in both developing new ideas for dark matter experiments and understanding the data at the Large Hadron Collider in Geneva Switzerland to look for new physics,” says Peter Fisher, professor and head of the Department of Physics. “In dark matter, he instigated an experiment that Richard Milner and I are now leading, called DarkLight. At the LHC, he improved the understanding of how nuclear matter forms into particles, and used that new understanding to improve the sensitivity to particles that have not yet been observed.  He is really a key element in our particle theory effort.”

Thaler’s research has been recognized with an Early Career Research Award from the U.S. Department of Energy in 2011, a Presidential Early Career Award from the White House in 2012, and a Sloan Research Fellowship from the Alfred P. Sloan Foundation in 2013. As the Edgerton Award citation reads, “his creativity as a theorist bears directly on what experimentalists are able to measure — and hence on what physicists can learn about the laws of nature.”

Thaler has also received high marks from his students and colleagues, for his teaching and mentorship. The Department of Physics awarded him the Beuchner Faculty Undergraduate Advising Award in 2013, as well as the Beuchner Faculty Teaching Award in 2014. And his teaching evaluation score for 8.06 (Advanced Undergraduate Quantum Mechanics) is the highest that any instructor has received in the course’s 17-year history.

"It is an honor and a delight to receive this award from my MIT faculty colleagues,” Thaler says. “Of course, both teaching and research are collaborative efforts, and I am grateful to my students and coauthors for pushing me to the edge of scientific knowledge."