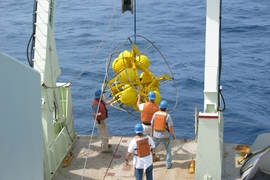 ↓ Download Image
Caption: Ocean engineers used this bottom-resting instrument system for their research. “Internal tides are a big chunk of energy that’s input to the ocean. If you know how that energy is dissipated and where it goes, you can explain climate and better understand short-term predictions and the ocean in general,” says Pierre Lermusiaux, associate professor of mechanical engineering and ocean science and engineering at MIT.
Credits: Photo: Tim Duda/WHOI

Caption:
Ocean engineers from MIT, the University of Minnesota at Duluth, and the Woods Hole Oceanographic Institution have accurately simulated the motion of internal tides along a shelf break called the Middle Atlantic Bight — a region off the coast of the eastern U.S. that stretches from Cape Cod in Massachusetts to Cape Hatteras in North Carolina.
Credits:
Image: Google Earth

Caption:
Ocean engineers used this bottom-resting instrument system for their research. “Internal tides are a big chunk of energy that’s input to the ocean. If you know how that energy is dissipated and where it goes, you can explain climate and better understand short-term predictions and the ocean in general,” says Pierre Lermusiaux, associate professor of mechanical engineering and ocean science and engineering at MIT.
Credits:
Photo: Tim Duda/WHOI

In certain parts of the ocean, towering, slow-motion rollercoasters called internal tides trundle along for miles, rising and falling for hundreds of feet in the ocean’s interior while making barely a ripple at the surface. These giant, hidden swells are responsible for alternately drawing warm surface waters down to the deep ocean and pulling marine nutrients up from the abyss.

Internal tides are generated in part by differences in water density, and created along continental shelf breaks, where a shallow seafloor suddenly drops off like a cliff, creating a setting where lighter water meets denser seas. In such regions, tides on the surface produce oscillating, vertical currents, which in turn generate waves below the surface, at the interface between warmer, shallow water, and colder, deeper water. These subsurface waves are called “internal tides,” as they are “internal” to the ocean and travel at the same frequency as surface tides. Internal tides are largely calm in some regions but can become chaotic near shelf breaks, where scientists have been unable to predict their paths.

Now for the first time, ocean engineers and scientists from MIT, the University of Minnesota at Duluth (UMD), and the Woods Hole Oceanographic Institution (WHOI) have accurately simulated the motion of internal tides along a shelf break called the Middle Atlantic Bight — a region off the coast of the eastern U.S. that stretches from Cape Cod in Massachusetts to Cape Hatteras in North Carolina. They found that the tides’ chaotic patterns there could be explained by two oceanic “structures”: the ocean front at the shelf break itself, and the Gulf Stream — a powerful Atlantic current that flows some 250 miles south of the shelf break.

From the simulations, the team observed that both the shelf break and the Gulf Stream can act as massive oceanic walls, between which internal tides ricochet at angles and speeds that the scientists can now predict.

The researchers have published their findings in the Journal of Geophysical Research: Oceans and the Journal of Physical Oceanography. The team includes Samuel Kelly, an assistant professor at UMD who was a postdoc at MIT for this research; Pierre Lermusiaux, an associate professor of mechanical engineering and ocean science and engineering at MIT; Tim Duda, a senior scientist at WHOI; and Patrick Haley, a research scientist at MIT.

Lermusiaux says the team’s simulations of internal tides could help to improve sonar communications and predict ecosystems and fishery populations, as well as protect offshore oil rigs and provide a better understanding of the ocean’s role in a changing climate.

“Internal tides are a big chunk of energy that’s input to the ocean’s interior from the common [surface] tides,” he explains. “If you know how that energy is dissipated and where it goes, you can provide better predictions and better understand the ocean and climate in general.”

The effects of internal waves were first reported in the late 1800s, when Norwegian sailors, attempting to navigate a fjord, experienced a strange phenomenon: Even though the water’s surface appeared calm, their ship seemed to strongly resist sailing forward — a phenomenon later dubbed “dead water.”

“It would be dead calm in the water, and you’d turn your ship on but it wouldn’t move,” Lermusiaux says. “Why? Because the ship is generating internal waves because of the density difference between the light water on top and the salty water on the bottom in the fjord, that keep you in place.”

Since then, scientists have found that surface tides, just like internal tides, are generated by the cyclical, gravitational pull of the sun and the moon, and travel between density-varying mediums. Surface waves travel at the boundary between the ocean and the air, while internal waves and internal tides flow between water layers of varying density.

“What people didn’t really know was, why can those internal tides be so variable and intermittent?” Duda says.

In the summer of 2006, oceanographers embarked on a large-scale scientific cruise, named “Shallow Water ’06,” to generate a detailed picture of how sound waves travel through complex coastal waters, specifically along part of the Middle Atlantic Bight region. The experiment confirmed that internal tides stemmed from the region’s shelf break at predictable intervals. Puzzlingly, the experiment also showed that internal tides arrived back at the shelf break at unpredictable times and locations.

“One would think if they were all generated at the shelf break, they would be more or less uniform, in and out,” Lermusiaux says.

To solve this puzzle, Lermusiaux, Haley, and their colleagues incorporated data from the 2006 cruise into hydrodynamic simulations to represent tides in a realistic ocean environment. These data-driven simulations included not only tides but also “background structures,” such as density gradients, eddies, and currents such as the Gulf Stream, with which tides might interact.

After completing more than 2,500 simulations of the Middle Atlantic Bight region, they observed that internal tides generated close to the shelf break seemed to flow out toward the ocean, only to bounce back once they reached the Gulf Stream. As the Gulf Stream meandered, the exact direction and location of the internal tides became more variable.

The researchers sought to find mathematical equations that would describe the underlying fluid dynamics that they observed in their simulations. To do this, they started with an existing equation that characterizes the behavior of internal tides but involves an idealized scenario, with limited interactions with other features. The team added new “interaction terms,” or factors, into the equations that described the dynamics of the Gulf Stream and the shelf break front, which they derived from their data-driven simulations.

“It was really exciting when we wrote down a set of slightly idealized equations and saw that the internal tides extracted from the complex simulations were obeying almost the exact same equations," Kelly says.

The match between their simulations and equations indicated to the researchers that the Gulf Stream and the shelf break front were indeed influencing the behavior of the internal tides. With this knowledge, they were able to accurately predict the speed and arrival times of internal waves at the shelf break, by first predicting the strength and position of the Gulf Stream over time. They also showed that the strength of the shelf break front alters the speed and arrival times of internal tides.

The team is currently applying their simulations to oceanic regions around Martha’s Vineyard, the Pacific Islands, and Australia, where internal tides are highly variable and their behavior can have a large role in shaping marine ecosystems and mediating the effects of climate change.

“Our work shows that, with data-driven simulations, you can find and add missing terms, and really explain the ocean’s interactions,” Lermusiaux says. “If you look at ocean or atmospheric sciences today, understanding interactions of features is where big questions are.”

This research was funded in part by the Office of Naval Research and the National Science Foundation.

Sometimes the quickest path is not a straight line