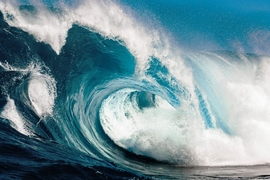 ↓ Download Image
Caption: “These waves really talk to each other,” Themis Sapsis says. “They interact and exchange energy. It’s not just bad luck. It’s the dynamics that create this phenomenon.”

Caption:
“These waves really talk to each other,” Themis Sapsis says. “They interact and exchange energy. It’s not just bad luck. It’s the dynamics that create this phenomenon.”
Credits:
Image: MIT News

Sailing history is rife with tales of monster-sized rogue waves — huge, towering walls of water that seemingly rise up from nothing to dwarf, then deluge, vessel and crew. Rogue waves can measure eight times higher than the surrounding seas and can strike in otherwise calm waters, with virtually no warning.

Now a prediction tool developed by MIT engineers may give sailors a 2-3 minute warning of an incoming rogue wave, providing them with enough time to shut down essential operations on a ship or offshore platform.

The tool, in the form of an algorithm, sifts through data from surrounding waves to spot clusters of waves that may develop into a rogue wave. Depending on a wave group’s length and height, the algorithm computes a probability that the group will turn into a rogue wave within the next few minutes.

“It’s precise in the sense that it’s telling us very accurately the location and the time that this rare event will happen,” says Themis Sapsis, the American Bureau of Shipping Career Development Assistant Professor of Mechanical Engineering at MIT. “We have a range of possibilities, and we can say that this will be a dangerous wave, and you’d better do something. That’s really all you need.”

Sapsis and former postdoc Will Cousins have published their results this week in the Journal of Fluid Mechanics.

See how MIT engineers developed a prediction tool that could give sailors a 2-3 minute warning of an incoming rogue wave.

Like many complex systems, the open ocean can be represented as a chaotic mix of constantly changing data points. To understand and predict rare events such as rogue waves, scientists have typically taken a leave-no-wave-behind approach, in which they try to simulate every individual wave in a given body of water, to give a high-resolution picture of the sea state, as well as any suspicious, rogue-like activity. This extremely detailed approach is also computationally expensive, as it requires a cluster of computers to solve equations for each and every wave, and their interactions with surrounding waves.

Sapsis and Cousins devised a much simpler, faster way to predict rogue waves, given data on the surrounding wave field.

In previous work, the team identified one mechanism by which rogue waves form in unidirectional wave fields. They observed that, while the open ocean consists of many waves, most of which move independently of each other, some waves cluster together in a single wave group, rolling through the ocean together. Certain wave groups, they found, end up “focusing” or exchanging energy in a way that eventually leads to an extreme rogue wave.

“These waves really talk to each other,” Sapsis says. “They interact and exchange energy. It’s not just bad luck. It’s the dynamics that create this phenomenon.”

In their current work, the researchers sought to identify precursors, or patterns in those wave groups that ultimately end up as rogue waves. To do this, they combined ocean wave data available from measurements taken by ocean buoys, with nonlinear analysis of the underlying water wave equations.

Sapsis and Cousins used the statistical data to quantify the range of wave possibilities, for a given body of water. They then developed a novel approach to analyze the nonlinear dynamics of the system and predict which wave groups will evolve into extreme rogue waves.

They were able to predict which groups turned rogue, based on two parameters: a wave group’s length and height. The combination of statistics and dynamics helped the team identify the length-scale of a critical wave group, which has the highest likelihood of evolving into a rogue wave. Using this, the team derived a simple algorithm to predict a rogue wave based on incoming data. By tracking the energy of the surrounding wave field over this length-scale, they could immediately calculate the probability of a rogue wave developing.

“Using data and equations, we’ve determined for any given sea state the wave groups that can evolve into rogue waves,” Sapsis says. “Of those, we only observe the ones with the highest probability of turning into a rare event. That’s extremely efficient to do.”

Sapsis says the team’s algorithm is able to predict rogue waves several minutes before they fully develop. To put the algorithm into practice, he says ships and offshore platforms will have to utilize high-resolution scanning technologies such as LIDAR and radar to measure the surrounding waves.

“If we know the wave field, we can identify immediately what would be the critical length scale that one has to observe, and then identify spatial regions with high probability for a rare event,” Sapsis says. “If you are performing operations on an aircraft carrier or offshore platform, this is extremely important.”

“The approach is original — it is fast, easy to implement, and it does not require computational power,” says Miguel Onorato, professor of physics at the University of Turin, who was not involved in the research. “Tests in wave basins and field measurements data are needed in order to establish reliability of the tool in realistic conditions.”

This research was supported in part by the Office of Naval Research, the Army Research Office, and the American Bureau of Shipping.

In this video, The Economist explores how MIT researchers have developed a new algorithm that can predict where and when rogue waves might strike. The algorithm “identifies groups of waves most likely to form a rogue wave. The MIT algorithm is so thrifty that a ship’s skipper can run it on a laptop.”

MIT researchers have developed an algorithm capable of predicting the onset of rogue waves, writes Jason Thomson for The Christian Science Monitor. The algorithm, “hunts through data collected about surrounding waves, sifting for signs of clusters that could coalesce and crest into one of these behemoths.”

Popular Science reporter Mary Beth Griggs writes that MIT researchers have developed a new tool that could provide advanced warning of rogue waves. The tool should allow crews “to detect rogue wave minutes before they form, giving them enough time to adjust course, or at least hang on.”

MIT researchers have developed an algorithm that can predict rogue waves, reports Matt Burgess for Wired. Burgess explains that the algorithm uses “statistical data, collected from buoys in the ocean, to quantify the range of possible waves for any body of water.”

To capture a wave