Caption:
Pierre Lermusiaux
Credits:
Photo: M. Scott Brauer
“When you have eliminated all which is impossible, then whatever remains, however improbable, must be the truth.”

A version of this quote, originally penned by Sir Arthur Conan Doyle in “The Case-Book of Sherlock Holmes,” appears in a dog-eared copy of “Advanced Mathematical Methods for Scientists and Engineers” on a shelf in Pierre Lermusiaux’s office. The textbook, which he has kept since he was an engineering undergraduate in Belgium, introduces each chapter with a quote from the fictional sleuth — a literary prompt that pushed Lermusiaux, as a young student, to keep reading.

The quote above is particularly apt for Lermusiaux, who has devoted his research, in part, to eliminating unlikely scenarios in ocean dynamics. 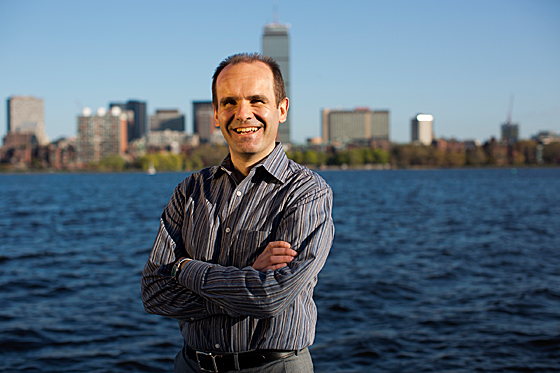 Lermusiaux leads MIT’s Multidisciplinary Simulation, Estimation, and Assimilation Systems (MSEAS) group, which develops models and assimilation schemes to better predict ocean behavior for a wide range of applications — from planning the most efficient paths for underwater robots to anticipating how bioluminescent organisms will affect sonar propagation.

The group focuses, in part, on modeling coastal areas, which Lermusiaux describes as a veritable sea of complexity.

“In coastal areas, things can get more mixed up than in the open ocean,” says Lermusiaux, an associate professor in the Department of Mechanical Engineering. “You have fronts and eddies, currents and jets, and the effects of winds, the seabed and the Earth’s rotation. There is a lot of coastal ocean in the world, and it’s very dynamic.”

The concept of fluid dynamics was of early interest to Lermusiaux, who remembers learning of the Coriolis effect — the inertial force created by the Earth’s rotation — in a high school geography class.

“The teacher started explaining with an apple, and I still vividly remember that part, and thought it was fascinating how these forces would appear,” he recalls.

Lermusiaux grew up in Liège, Belgium, in a family of scientists. His father is a nuclear engineer, his mother a geography professor, and his sister an architect. The family often went along on his mother’s field trips, and took countless vacation detours to visit natural sites and manmade systems, including old ruins and architectural relics, following the family mantra: “It needs to be seen.”

His father comes from a long line of farmers, dating back five generations — a lineage that may have rubbed off on Lermusiaux, who spent many of his weekends and holidays working at a local farm with a friend.

“We’d get up very early in the morning, and they’d do a very good breakfast of eggs and bacon, and you were almost like a son of the family,” Lermusiaux says. “We’d show up, work very hard, and we’d stink by the end of the day. But it didn’t seem like work to us — it was fun.”

When it came time to decide on a path after graduating with an undergraduate degree in mechanical engineering from Liège University, Lermusiaux recalls broaching the subject of graduate studies abroad over the dinner table. Not long after, he headed across the Atlantic to Harvard University to pursue a PhD in engineering science.

For his thesis, Lermusiaux worked to whittle down the uncertainty in ocean modeling. At the time, ocean data were relatively limited, and samples came with some uncertainty. As a result, approximate models initialized using that fuzzy data could lead to widely varying predictions. Lermusiaux looked for ways to characterize and predict uncertainty, and for ways to combine models with multiple data sets to reduce this uncertainty. He developed a data-assimilation method and computational schemes that produced better estimates of, and furthered understanding of, ocean dynamics. His work came at a pivotal time in ocean engineering.

“It was the end of the Cold War, and people were looking less at the deep ocean, and moving toward the coast,” Lermusiaux says. “It was the beginning of trying to resolve the multiple scales and the motions in the ocean that matter, as realistically as possible.”

During his time at Harvard, Lermusiaux’s work occasionally took him out to sea. On one sampling expedition, he spent three weeks aboard a NATO ship near the Faroe Islands, halfway between Norway and Iceland. The region sits along the Iceland-Faroe Ridge, where warm currents from the Atlantic meet frigid waters from the Nordic seas. The interplay between the two water masses creates extremely powerful fronts that can deflect sonar signals. (The region, in fact, is a setting for the novel “Red October,” in which a Russian submarine evades detection by hiding in the turbulent waters.) Onboard the ship, Lermusiaux analyzed data collected during the cruise and found large-scale wave modes.

Today, he says, much of this computational engineering work can be done remotely, thanks to the Internet. Researchers can download data directly from cruise servers, and perform analyses on more powerful computers in the lab.

Lermusiaux set up his own lab at the end of 2006 when, after receiving his PhD from Harvard, he accepted a faculty position at MIT. Based in the ocean science and engineering section of MIT’s Department of Mechanical Engineering, his group carries out research in mechanics, computations and control. Specifically, his group has developed and applied new methods for multiscale modeling, uncertainty quantification, Bayesian data assimilation and the guidance of autonomous vehicles.

A specific focus has been to answer questions involving nonlinearities and multiple scales. For example, the team is modeling the dynamic marine environment in Stellwagen Bank, at the mouth of Massachusetts Bay — a rich ecological web of life forms from plankton to whales. Lermusiaux’s group uses mathematical computations to model the relationship between physical and biological processes, aiming to understand how eddies, waves and currents enhance the region’s nutrient delivery and retention.

The group has also been looking further out to sea to study multiscale dynamics at continental shelf breaks — boundaries at which the shallow ocean floor suddenly drops off, plunging thousands of feet and giving way to much deeper waters.

“You have fronts between the shelf water and deeper water, and that’s an important region for exchanges,” Lermusiaux explains. “However, the multiscale interactions at shelf breaks are not well understood.”

Recently, his group has characterized the multiscale variability of internal tides in the Middle Atlantic Bight shelf break. They showed how this internal tide variability can be caused by strong wind and by direct Gulf Stream interactions.

To allow such multiscale studies, Lermusiaux’s team has adapted new ideas in computational fluid dynamics. They are developing numerical models with variable resolutions in time and space, and have also created equations that predict uncertainty in large-scale ocean systems. They then developed nonlinear Bayesian data-assimilation methods that employ these uncertainty predictions. These methods can predict the likelihood of different scenarios and combine these scenarios with actual field observations in a rigorous Bayesian fashion.

The researchers are also applying their models to the dynamic control and planning of swarms of autonomous underwater vehicles, or AUVs. Increasingly, these robots are used to sample and monitor the ocean for pollution, marine populations, energy applications, and security and naval operations. With his students, Lermusiaux is developing mathematical models to determine the most efficient paths for robots to take, maintaining coordination among robots along the way. For instance, if a current is likely to flow in a certain direction, a robot may want to simply ride the wave toward its destination.

Lermusiaux’s group is also working on schemes that guide such sensing robots toward locations that provide the most useful undersea data. Similarly, the researchers have recently integrated their work into powerful new systems that can objectively rank competing ocean models, accounting for all uncertainties.

The key to this kind of modeling, as with much of Lermusiaux’s work, is eliminating unlikely, or impossible, scenarios. For example, determining whether a vehicle should go left or right is a numerical process of elimination, depending on certain parameters like current speed and direction — an oversimplification, compared with the incredibly complex environment which he models.

“We have made advances in numerical schemes, uncertainty prediction, data assimilation and inference, which all have applications in many engineering and scientific fields,” Lermusiaux says. “The smarter you are in combining information with model simulations, the better you can be.”