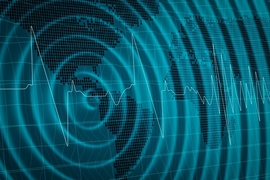 It is well known that an earthquake in one part of the world can trigger others thousands of kilometers away.

But in a paper published in the journal Science Advances, researchers reveal that these triggered earthquakes are just one outward sign of far more widespread changes taking place below the Earth’s surface.

Earthquakes can fundamentally change the elastic properties of the Earth’s crust in regions up to 6,000 kilometers away, altering its ability to withstand stresses for a period of up to a few weeks, according to Kevin Chao, a postdoc in MIT’s Department of Earth, Atmospheric and Planetary Sciences and a member of a research team led by Andrew Delorey at Los Alamos National Laboratory.

The research demonstrates that the Earth is a dynamic and interconnected system, where one large earthquake can create a cascading sequence of events thousands of kilometers away, Chao says.

Earthquakes occur when stress builds up along a tectonic fault. This stress causes the two surfaces of the fault, which had previously been stuck together due to friction, to suddenly move, or slide, releasing energy in the form of seismic waves.

These waves take the form of both body waves, which cause the shaking movement that does so much damage during a quake, and surface waves. Surface waves can travel thousands of kilometers beneath the ground.

When a surface wave from an earthquake some way off passes through another fault region, it changes the balance between the frictional properties that keep the surfaces locked together, the elasticity that allows the crust to withstand strain, and the stress state that can cause it to fail, Chao says.

“When surface waves pass through, all of these properties rearrange and change,” he says. “If a fault with high stress is ready to fail, it will accumulate more stresses in the fault, meaning an earthquake could occur at any time.”

To demonstrate these changes, the researchers studied the 2012 earthquake off the coast of North Sumatra in the Indian Ocean. The earthquake, which had a magnitude of 8.6, is known to have been followed by two earthquakes in Japan with a magnitude greater than 5.5.

When the researchers studied data from strain meter readings, GPS equipment, and information on seismicity — or the number of small-magnitude earthquakes — in the region, as well as the migration of the earthquakes, they found that the two triggered quakes with a magnitude of greater than 5.5 were part of a cluster of activity in the area in the days after the Indian Ocean event.

“When the Indian Ocean earthquake occurred, the surface wave passed through the northeast of Japan, and the seismicity in the region was suddenly triggered,” Chao says. “During that time of increased seismicity, there were three triggered earthquakes in the region with a magnitude of greater than 5.5,” he says.

This region of the Earth’s crust was already critically stressed following the major Japanese earthquake of 2011, so the additional stress, albeit temporary, caused by the surface wave passing through, was enough to trigger another cluster of quakes.

When a fault fails and an earthquake occurs, it also pushes into the neighboring region, reducing the available space and compressing the crust in this area.

So the researchers also looked for signs of compressive stress in this region of Japan following the Indian Ocean earthquake. They found signs that cracks in the rock under the Japanese mainland were closing as a result of compressive stress, increasing the shear strength of the crust.

While the research will not in itself allow us to predict earthquakes, it does help to increase our understanding of how they are triggered, as well as how the Earth’s crust behaves, Chao says.

“We still cannot say that there will definitely be another earthquake after the first one has struck, because although we know there will be changes, we do not know the existing stress conditions in every region, so we cannot predict anything with certainty,” Chao says.

“But one important thing we can say is that we know earthquakes do interact with each other, because surface waves can travel thousands of kilometers, and change the elasticity in another region,” he adds.

The research is extremely interesting, says John Vidale, a professor of Earth and space sciences at the University of Washington. In particular, he says it is surprising to see so many signals of transient deformation caused solely by the stressing of a distant event.

“It is also a surprise to see indications that the deformation might be pervasive rather than limited to the immediate vicinity of the Earth’s surface or a single fault,” Vidale adds.

The clear observation of an increase in rock stiffness, beginning at the time of the distant earthquake, is a new observation, Vidale says: “The weeks-long progression of small earthquake activity, material change, and motion are just the latest in a line of geophysical studies indicating that the Earth moves much more irregularly than we suspected just a decade or two ago.”

Seismic gap may be filled by an earthquake near Istanbul