Seismic gap may be filled by an earthquake near Istanbul 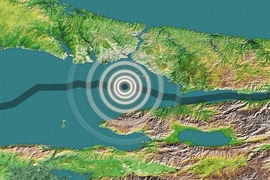 ↓ Download Image
Caption: This map of Turkey shows the artists' interpretation of the North Anatolian Fault (blue line) and the possible site of an earthquake (white lines) that could strike beneath the Sea of Marmara.
Credits: Image: NASA, and Christine Daniloff and Jose-Luis Olivares/MIT

Caption:
This map of Turkey shows the artists' interpretation of the North Anatolian Fault (blue line) and the possible site of an earthquake (white lines) that could strike beneath the Sea of Marmara.
Credits:
Image: NASA, and Christine Daniloff and Jose-Luis Olivares/MIT

When a segment of a major fault line goes quiet, it can mean one of two things: The “seismic gap” may simply be inactive — the result of two tectonic plates placidly gliding past each other — or the segment may be a source of potential earthquakes, quietly building tension over decades until an inevitable seismic release.

Researchers from MIT and Turkey have found evidence for both types of behavior on different segments of the North Anatolian Fault — one of the most energetic earthquake zones in the world. The fault, similar in scale to California’s San Andreas Fault, stretches for about 745 miles across northern Turkey and into the Aegean Sea.

The researchers analyzed 20 years of GPS data along the fault, and determined that the next large earthquake to strike the region will likely occur along a seismic gap beneath the Sea of Marmara, some five miles west of Istanbul. In contrast, the western segment of the seismic gap appears to be moving without producing large earthquakes.

“Istanbul is a large city, and many of the buildings are very old and not built to the highest modern standards compared to, say, southern California,” says Michael Floyd, a research scientist in MIT’s Department of Earth, Atmospheric and Planetary Sciences. “From an earthquake scientist’s perspective, this is a hotspot for potential seismic hazards.”

Although it’s impossible to pinpoint when such a quake might occur, Floyd says this one could be powerful — on the order of a magnitude 7 temblor, or stronger.

“When people talk about when the next quake will be, what they’re really asking is, ‘When will it be, to within a few hours, so that I can evacuate?’ But earthquakes can’t be predicted that way,” Floyd says. “Ultimately, for people’s safety, we encourage them to be prepared. To be prepared, they need to know what to prepare for — that’s where our work can contribute”

Floyd and his colleagues, including Semih Ergintav of the Kandilli Observatory and Earthquake Research Institute in Istanbul and MIT research scientist Robert Reilinger, have published their seismic analysis in the journal Geophysical Research Letters.

In recent decades, major earthquakes have occurred along the North Anatolian Fault in a roughly domino-like fashion, breaking sequentially from east to west. The most recent quake occurred in 1999 in the city of Izmit, just east of Istanbul. The initial shock, which lasted less than a minute, killed thousands. As Istanbul sits at the fault’s western end, many scientists have thought the city will be near the epicenter of the next major quake.

To get an idea of exactly where the fault may fracture next, the MIT and Turkish researchers used GPS data to measure the region’s ground movement over the last 20 years. The group took data along the fault from about 100 GPS locations, including stations where data are collected continuously and sites where instruments are episodically set up over small markers on the ground, the positions of which can be recorded over time as the Earth slowly shifts.

“By continuously tracking, we can tell which parts of the Earth’s crust are moving relative to other parts, and we can see that this fault has relative motion across it at about the rate at which your fingernail grows,” Floyd says.

From their ground data, the researchers estimate that, for the most part, the North Anatolian Fault must move at about 25 millimeters — or one inch — per year, sliding quietly or slipping in a series of earthquakes.

As there’s currently no way to track the Earth’s movement offshore, the group also used fault models to estimate the motion off the Turkish coast. The team identified a segment of the fault under the Sea of Marmara, west of Istanbul, that is essentially stuck, with the “missing” slip accumulating at 10 to 15 millimeters per year. This section — called the Princes’ Island segment, for a nearby tourist destination — last experienced an earthquake 250 years ago.

Floyd and colleagues calculate that the Princes’ Island segment should have slipped about 8 to 11 feet — but it hasn’t. Instead, strain has likely been building along the segment for the last 250 years. If this tension were to break the fault in one cataclysmic earthquake, the Earth could shift by as much as 11 feet within seconds.

That gives very little warning for nearby Istanbul, says Marco Bohnhoff, a professor at the German Research Center for Geosciences in Potsdam, Germany.

“The nucleation point is pretty close to the city center, which makes early warning time pretty short — between two to six seconds,” says Bohnhoff, who has studied seismic patterns in the region. “Since the international airport is located in an area where ground motion would be high, it would be difficult to get in emergency troops, and unfortunately 90 percent of buildings in Istanbul do not fulfill building codes, and might not resist the expected earthquake.”

Although such accumulated strain may be released in a series of smaller, less hazardous rumbles, Floyd says that given the historical pattern of major quakes along the North Anatolian Fault, it would be reasonable to expect a large earthquake off the coast of Istanbul within the next few decades.

“Earthquakes are not regular or predictable,” Floyd says. “They’re far more random over the long run, and you can go many lifetimes without experiencing one. But it only takes one to affect many lives. In a location like Istanbul that is known to be subject to large earthquakes, it comes back to the message: Always be prepared.”