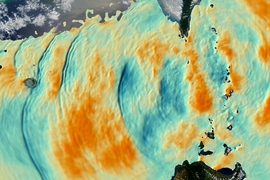 ↓ Download Image
Caption: Satellite image of the South China Sea with colors added to indicate the calculated vertical displacement of ocean layers near 200 meters deep, based on simulated model data and calculations run by Harper Simmons at the University of Alaska at Fairbanks and depicted by a graphics team at the University of Washington. Orange indicates upward movement, and blue indicates downward movement.

Caption:
Satellite image of the South China Sea with colors added to indicate the calculated vertical displacement of ocean layers near 200 meters deep, based on simulated model data and calculations run by Harper Simmons at the University of Alaska at Fairbanks and depicted by a graphics team at the University of Washington. Orange indicates upward movement, and blue indicates downward movement.
Credits:
Courtesy of the researchers

Detailed new field studies, laboratory experiments, and simulations of the largest known “internal waves” in the Earth’s oceans — phenomena that play a key role in mixing ocean waters, greatly affecting ocean temperatures — provide a comprehensive new view of how these colossal, invisible waves are born, spread, and die off.

The work, published today in the journal Nature, could add significantly to the improvement of global climate models, the researchers say. The paper is co-authored by 42 researchers from 25 institutions in five countries.

“What this report presents is a complete picture, a cradle-to-grave picture of these waves,” says Thomas Peacock, an associate professor of mechanical engineering at MIT, and one of the paper’s two lead authors.

Internal waves — giant waves, below the surface, that roil stratified layers of heavier, saltier water and lighter, less-salty water — are ubiquitous throughout the world’s oceans. But by far the largest and most powerful known internal waves are those that form in one area of the South China Sea, originating from the Luzon Strait between the Philippines and Taiwan.

These subsurface waves can tower more than 500 meters high, and generate powerful turbulence. Because of their size and behavior, the rise and spread of these waves are important for marine processes, including the supply of nutrients for marine organisms; the distribution of sediments and pollutants; and the propagation of sound waves. They are also a significant factor in the mixing of ocean waters, combining warmer surface waters with cold, deep waters — a process that is essential to understanding the dynamics of global climate.

This international research effort, called IWISE (Internal Waves In Straits Experiment), was a rare undertaking in this field, Peacock says; the last such field study on internal waves on this scale, the Hawaii Ocean Mixing Experiment, concluded in 2002. The new study looked at internal waves that were much stronger, and went significantly further in determining not just how the waves originated, but how their energy dissipated.

One unexpected finding, Peacock says, was the degree of turbulence produced as the waves originate, as tides and currents pass over ridges on the seafloor. “These were unexpected field discoveries,” he says, revealing “some of the most intense mixing ever observed in the deep ocean. It’s like a giant washing machine — the mixing is much more dramatic than we ever expected.”

The new observations, Peacock says, resolve a longstanding technical question about how internal waves propagate — whether the towering waves start out full strength at their point of origin, or whether they continue to build as they spread from that site. Many attempts to answer this question have produced contradictory results over the years.

This animation shows density layers in the South China Sea being perturbed by the regular back-and-forth tidal flow through the Luzon Strait. This leads to large amplitude internal waves (shown in red underwater, and in white when seen from above), being radiated west to the Chinese continental shelf.

This new research, which involved placing several long mooring lines from the seafloor to buoys at the surface, with instruments at intervals all along the lines, has decisively resolved that question, Peacock says: The waves grow larger as they propagate. Prior measurements, the new work found, had been drawn from too narrow a slice of the region, resulting in conflicting results — rather like the fable of blind men describing an elephant. The new, more comprehensive data has now resolved the mystery.

The new data also contradict a long-held assumption — a “commonly held belief that was almost stated as fact,” Peacock says — that solitary internal waves are completely absent from the South China Sea during the winter months. But with equipment in place to reliably measure water movement throughout the year, the team found these waves were “carrying on quite happily throughout the entire winter,” Peacock says: Previously, their presence had been masked by the winter’s stormier weather, and by the influence of a strong boundary current that runs along the coast of Taiwan — the regional equivalent of the Gulf Stream.

The improved understanding of internal waves, Peacock says, could be useful for researchers in a number of areas. The waves are key to some ecosystems, for example — some marine creatures essentially “surf” them to move in toward shore, for feeding or breeding; in the South China Sea, this process helps sustain an extensive coral reef system. The waves also help carry heat from the ocean’s surface to its depths, an important parameter in modeling climate.

Tim Duda, a professor at Woods Hole Oceanographic Institution who was not involved in this research, says this project “has directed enough effort toward one location to give a fairly complete description of what is happening.”

Previously, Duda says, “No single tool (theory, field measurements, computational model) could unambiguously explain the physics of the internal waves of the area.” The new work, he adds, “has overcome the unique limitations of each tool to give a solid result.”

These findings could be significant, Duda says: “The practical impact of understanding and being able to predict these waves is very high for all human operations in the South China Sea, including the offshore oil and gas business.”

The research, which was primarily a collaboration between U.S. and Taiwanese scientists, was funded by the U.S. Office of Naval Research and the Taiwan National Science Council.

Professor Thomas Peacock and his research group have examined the world’s strongest “internal waves,” some of which measure more than 500 meters high, writes Chris Sweeney for Boston Magazine. “Internal waves are the lumbering giants of the ocean,” says Peacock. “They move fairly slowly but they are very large in amplitude and carry a lot of energy.”