Paula Hammond elected to the National Academy of Medicine 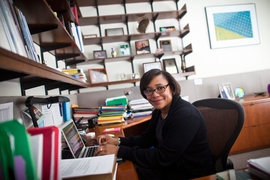 ↓ Download Image
Caption: Paula Hammond, the David H. Koch Professor in Engineering and head of MIT’s Department of Chemical Engineering, has been elected to the National Academy of Medicine in recognition of her distinguished contributions to medicine and health.

Caption:
Paula Hammond, the David H. Koch Professor in Engineering and head of MIT’s Department of Chemical Engineering, has been elected to the National Academy of Medicine in recognition of her distinguished contributions to medicine and health.

Paula Hammond, the David H. Koch Professor in Engineering and head of MIT’s Department of Chemical Engineering, has been elected to the National Academy of Medicine (NAM) in recognition of her distinguished contributions to medicine and health.

Hammond is one of 70 new members and nine international members announced today at the annual meeting of the NAM. Membership in the NAM is considered one of the highest honors in the fields of health and medicine and recognizes individuals who have demonstrated outstanding professional achievements and commitment to service.

Hammond, a member of MIT’s Koch Institute for Integrative Cancer Research and a founding member of the Institute for Soldier Nanotechnologies, focuses on biomaterials and drug delivery, in particular the self-assembly of polymeric nanomaterials.

The core of Hammond’s work is the use of electrostatics, including a technique known as layer-by-layer assembly, to generate functional materials with highly controlled architectures. These materials are used to deliver drugs for cancer and regenerative medicine, including treatments for wound healing and bone repair. Some of her recent efforts include targeted nanomedicine approaches to address resistant cancers, such as advanced ovarian cancer. She has worked with clinicians and researchers at various Boston-area hospitals, and she and members of her lab have been involved with a range of biotech companies.

Hammond’s many awards and honors include the Alpha Chi Sigma Award for Chemical Engineering Research in 2014, the American Institute of Chemical Engineers Charles M. A. Stine Award in Materials Engineering and Science in 2013, the Ovarian Cancer Research Program Teal Innovator Award in 2013, the Junior Bose Faculty Award for Excellence in Teaching in 2000, an National Science Foundation Career Award in 1997, and the MIT Karl Taylor Compton Prize in 1992 (in recognition of achievements in citizenship and devotion to the welfare of MIT).