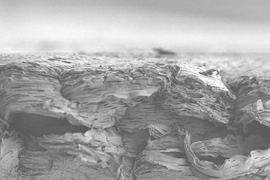 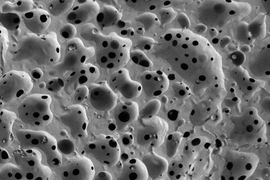 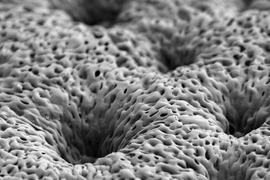 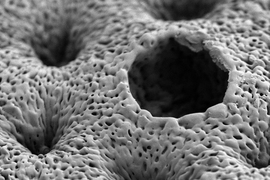 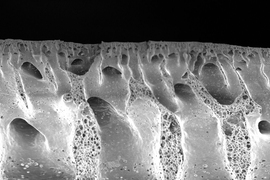 MIT chemical engineers have devised a new implantable tissue scaffold coated with bone growth factors that are released slowly over a few weeks. When applied to bone injuries or defects, this coated scaffold induces the body to rapidly form new bone that looks and behaves just like the original tissue.

This type of coated scaffold could offer a dramatic improvement over the current standard for treating bone injuries, which involves transplanting bone from another part of the patient’s body — a painful process that does not always supply enough bone. Patients with severe bone injuries, such as soldiers wounded in battle; people who suffer from congenital bone defects, such as craniomaxillofacial disorders; and patients in need of bone augmentation prior to insertion of dental implants could benefit from the new tissue scaffold, the researchers say.

“It’s been a truly challenging medical problem, and we have tried to provide one way to address that problem,” says Nisarg Shah, a recent PhD recipient and lead author of the paper, which appears in the Proceedings of the National Academy of Sciences this week.

Paula Hammond, the David H. Koch Professor in Engineering and a member of MIT’s Koch Institute for Integrative Cancer Research and Department of Chemical Engineering, is the paper’s senior author. Other authors are postdocs M. Nasim Hyder and Mohiuddin Quadir, graduate student Noémie-Manuelle Dorval Courchesne, Howard Seeherman of Restituo, Myron Nevins of the Harvard School of Dental Medicine, and Myron Spector of Brigham and Women’s Hospital.

Two of the most important bone growth factors are platelet-derived growth factor (PDGF) and bone morphogenetic protein 2 (BMP-2). As part of the natural wound-healing cascade, PDGF is one of the first factors released immediately following a bone injury, such as a fracture. After PDGF appears, other factors, including BMP-2, help to create the right environment for bone regeneration by recruiting cells that can produce bone and forming a supportive structure, including blood vessels.

Efforts to treat bone injury with these growth factors have been hindered by the inability to effectively deliver them in a controlled manner. When very large quantities of growth factors are delivered too quickly, they are rapidly cleared from the treatment site — so they have reduced impact on tissue repair, and can also induce unwanted side effects.

“You want the growth factor to be released very slowly and with nanogram or microgram quantities, not milligram quantities,” Hammond says. “You want to recruit these native adult stem cells we have in our bone marrow to go to the site of injury and then generate bone around the scaffold, and you want to generate a vascular system to go with it.”

This process takes time, so ideally the growth factors would be released slowly over several days or weeks. To achieve this, the MIT team created a very thin, porous scaffold sheet coated with layers of PDGF and BMP. Using a technique called layer-by-layer assembly, they first coated the sheet with about 40 layers of BMP-2; on top of that are another 40 layers of PDGF. This allowed PDGF to be released more quickly, along with a more sustained BMP-2 release, mimicking aspects of natural healing.

“This is a major advantage for tissue engineering for bones because the release of the signaling proteins has to be slow and it has to be scheduled,” says Nicholas Kotov, a professor of chemical engineering at the University of Michigan who was not part of the research team.

The scaffold sheet is about 0.1 millimeter thick; once the growth-factor coatings are applied, scaffolds can be cut from the sheet on demand, and in the appropriate size for implantation into a bone injury or defect.

The researchers tested the scaffold in rats with a skull defect large enough — 8 millimeters in diameter — that it could not heal on its own. After the scaffold was implanted, growth factors were released at different rates. PDGF, released during the first few days after implantation, helped initiate the wound-healing cascade and mobilize different precursor cells to the site of the wound. These cells are responsible for forming new tissue, including blood vessels, supportive vascular structures, and bone.

BMP, released more slowly, then induced some of these immature cells to become osteoblasts, which produce bone. When both growth factors were used together, these cells generated a layer of bone, as soon as two weeks after surgery, that was indistinguishable from natural bone in its appearance and mechanical properties, the researchers say.

“Using this combination allows us to not only have accelerated proliferation first, but also facilitates laying down some vascular tissue, which provides a route for both the stem cells and the precursor osteoblasts and other players to get in and do their jobs. You end up with a very uniform healed system,” Hammond says.

Another advantage of this approach is that the scaffold is biodegradable and breaks down inside the body within a few weeks. The scaffold material, a polymer called PLGA, is widely used in medical treatment and can be tuned to disintegrate at a specific rate so the researchers can design it to last only as long as needed.

Hammond’s team has filed a patent based on this work and now aims to begin testing the system in larger animals in hopes of eventually moving it into clinical trials.

This study was funded by the National Institutes of Health.

New way to stop the bleeding

Nanoparticles, made to order — inside and out

Practicing medicine at the nanoscale