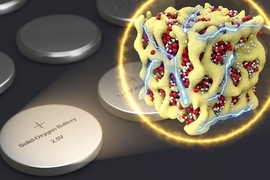 ↓ Download Image
Caption: In a new concept for battery cathodes, nanometer-scale particles made of lithium and oxygen compounds (depicted in red and white) are embedded in a sponge-like lattice (yellow) of cobalt oxide, which keeps them stable. The researchers propose that the material could be packaged in batteries that are very similar to conventional sealed batteries yet provide much more energy for their weight.

Caption:
In a new concept for battery cathodes, nanometer-scale particles made of lithium and oxygen compounds (depicted in red and white) are embedded in a sponge-like lattice (yellow) of cobalt oxide, which keeps them stable. The researchers propose that the material could be packaged in batteries that are very similar to conventional sealed batteries yet provide much more energy for their weight.
Credits:
Courtesy of the researchers

Lithium-air batteries are considered highly promising technologies for electric cars and portable electronic devices because of their potential for delivering a high energy output in proportion to their weight. But such batteries have some pretty serious drawbacks: They waste much of the injected energy as heat and degrade relatively quickly. They also require expensive extra components to pump oxygen gas in and out, in an open-cell configuration that is very different from conventional sealed batteries.

But a new variation of the battery chemistry, which could be used in a conventional, fully sealed battery, promises similar theoretical performance as lithium-air batteries, while overcoming all of these drawbacks.

The new battery concept, called a nanolithia cathode battery, is described in the journal Nature Energy in a paper by Ju Li, the Battelle Energy Alliance Professor of Nuclear Science and Engineering at MIT; postdoc Zhi Zhu; and five others at MIT, Argonne National Laboratory, and Peking University in China.

One of the shortcomings of lithium-air batteries, Li explains, is the mismatch between the voltages involved in charging and discharging the batteries. The batteries’ output voltage is more than 1.2 volts lower than the voltage used to charge them, which represents a significant power loss incurred in each charging cycle. “You waste 30 percent of the electrical energy as heat in charging. … It can actually burn if you charge it too fast,” he says.

Conventional lithium-air batteries draw in oxygen from the outside air to drive a chemical reaction with the battery’s lithium during the discharging cycle, and this oxygen is then released again to the atmosphere during the reverse reaction in the charging cycle.

In the new variant, the same kind of electrochemical reactions take place between lithium and oxygen during charging and discharging, but they take place without ever letting the oxygen revert to a gaseous form. Instead, the oxygen stays inside the solid and transforms directly between its three redox states, while bound in the form of three different solid chemical compounds, Li2O, Li2O2, and LiO2, which are mixed together in the form of a glass. This reduces the voltage loss by a factor of five, from 1.2 volts to 0.24 volts, so only 8 percent of the electrical energy is turned to heat. “This means faster charging for cars, as heat removal from the battery pack is less of a safety concern, as well as energy efficiency benefits,” Li says.

This approach helps overcome another issue with lithium-air batteries: As the chemical reaction involved in charging and discharging converts oxygen between gaseous and solid forms, the material goes through huge volume changes that can disrupt electrical conduction paths in the structure, severely limiting its lifetime.

The secret to the new formulation is creating minuscule particles, at the nanometer scale (billionths of a meter), which contain both the lithium and the oxygen in the form of a glass, confined tightly within a matrix of cobalt oxide. The researchers refer to these particles as nanolithia. In this form, the transitions between LiO2, Li2O2, and Li2O can take place entirely inside the solid material, he says.

The nanolithia particles would normally be very unstable, so the researchers embedded them within the cobalt oxide matrix, a sponge-like material with pores just a few nanometers across. The matrix stabilizes the particles and also acts as a catalyst for their transformations.

Conventional lithium-air batteries, Li explains, are “really lithium-dry oxygen batteries, because they really can’t handle moisture or carbon dioxide,” so these have to be carefully scrubbed from the incoming air that feeds the batteries. “You need large auxiliary systems to remove the carbon dioxide and water, and it’s very hard to do this.” But the new battery, which never needs to draw in any outside air, circumvents this issue.

The new battery is also inherently protected from overcharging, the team says, because the chemical reaction in this case is naturally self-limiting — when overcharged, the reaction shifts to a different form that prevents further activity. “With a typical battery, if you overcharge it, it can cause irreversible structural damage or even explode,” Li says. But with the nanolithia battery, “we have overcharged the battery for 15 days, to a hundred times its capacity, but there was no damage at all.”

In cycling tests, a lab version of the new battery was put through 120 charging-discharging cycles, and showed less than a 2 percent loss of capacity, indicating that such batteries could have a long useful lifetime. And because such batteries could be installed and operated just like conventional solid lithium-ion batteries, without any of the auxiliary components needed for a lithium-air battery, they could be easily adapted to existing installations or conventional battery pack designs for cars, electronics, or even grid-scale power storage.

Because these “solid oxygen” cathodes are much lighter than conventional lithium-ion battery cathodes, the new design could store as much as double the amount of energy for a given cathode weight, the team says. And with further refinement of the design, Li says, the new batteries could ultimately double that capacity again.

All of this is accomplished without adding any expensive components or materials, according to Li. The carbonate they use as the liquid electrolyte in this battery “is the cheapest kind” of electrolyte, he says. And the cobalt oxide component weighs less than 50 percent of the nanolithia component. Overall, the new battery system is “very scalable, cheap, and much safer” than lithium-air batteries, Li says.

The team expects to move from this lab-scale proof of concept to a practical prototype within about a year.

“This is a foundational breakthrough, which may shift the paradigm of oxygen-based batteries,” says Xiulei Ji, an assistant professor of chemistry at Oregon State University, who was not involved in this work. “In this system, commercial carbonate-based electrolyte works very well with solvated superoxide shuttles, which is quite impressive and may have to do with the lack of any gaseous O2 in this sealed system. All active masses of the cathode throughout cycling are solid, which presents not only large energy density but compatibility with the current battery manufacturing infrastructure.”

The research team included MIT research scientists Akihiro Kushima and Zongyou Yin; Lu Qi of Peking University; and Khalil Amine and Jun Lu of Argonne National Laboratory in Illinois. The work was supported by the National Science Foundation and the U.S. Department of Energy.

MIT researchers have outlined a new way of developing a lithium-oxygen battery that would increase the battery’s energy efficiency and longevity, according to The Economist. “In trials which discharged and recharged the battery 130 times, it lost less than 2% of its capacity,” The Economist notes.

MIT researchers have developed a new lithium-oxygen battery concept that improves energy efficiency and longevity, and could potentially be used in long-distance electric cars and smartphones, reports Ben Woods for Wired. The new approach results in “faster charging and more efficient batteries, due to lower heat wastage,” Woods explains.

MIT conference illustrates technologies developed in response to the pandemic and new opportunities for AI solutions for clinical management.

Examining the French stage during the Enlightenment and French Revolution

How a worm may yield insights into the gut-brain relationship

Research on mice suggests aging affects a brain circuit critical for learning to make some types of decisions.

Tulle-like DefeXtiles can be 3D printed with no custom software or hardware.