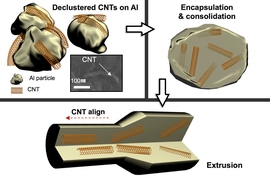 One of the main reasons for limiting the operating lifetimes of nuclear reactors is that metals exposed to the strong radiation environment near the reactor core become porous and brittle, which can lead to cracking and failure. Now, a team of researchers at MIT and elsewhere has found that, at least in some reactors, adding a tiny quantity of carbon nanotubes to the metal can dramatically slow this breakdown process.

For now, the method has only proved effective for aluminum, which limits its applications to the lower-temperature environments found in research reactors. But the team says the method may also be usable in the higher-temperature alloys used in commercial reactors.

The findings are described in the journal Nano Energy, in a paper by MIT Professor Ju Li, postdocs Kang Pyo So and Mingda Li, research scientist Akihiro Kushima, and 10 others at MIT, Texas A&M University, and universities in South Korea, Chile, and Argentina.

Aluminum is currently used in not only research reactor components but also nuclear batteries and spacecraft, and it has been proposed as material for storage containers for nuclear waste. So, improving its operating lifetime could have significant benefits, says Ju Li, who is the Battelle Energy Alliance Professor of Nuclear Science and Engineering and a professor of materials science and engineering.

The metal with carbon nanotubes uniformly dispersed inside “is designed to mitigate radiation damage” for long periods without degrading, says Kang Pyo So.

Helium from radiation transmutation takes up residence inside metals and causes the material to become riddled with tiny bubbles along grain boundaries and progressively more brittle, the researchers explain. The nanotubes, despite only making up a small fraction of the volume — less than 2 percent — can form a percolating, one-dimensional transport network, to provide pathways for the helium to leak back out instead of being trapped within the metal, where it could continue to do damage.

Testing showed that after exposure to radiation, the carbon nanotubes within the metal can be chemically altered to carbides, but they still retain their slender shape, “almost like insects trapped in amber,” Ju Li says. “It’s quite amazing — you don’t see a blob; they retain their morphology. It’s still one-dimensional.” The huge total interfacial area of these 1-D nanostructures provides a way for radiation-induced point defects to recombine in the metal, alleviating a process that also leads to embrittlement. The researchers showed that the 1-D structure was able to survive up to 70 DPA of radiation damage. (DPA is a unit  that refers to how many times, on average, every atom in the crystal lattice is knocked out of its site by radiation, so 70 DPA means a lot of radiation damage.)

After radiation exposure, Ju Li says, “we see pores in the control sample, but no pores” in the new material, “and mechanical data shows it has much less embrittlement.” For a given amount of exposure to radiation, the tests have shown the amount of embrittlement is reduced about five to tenfold.

The new material needs only tiny quantities of carbon nanotubes (CNTs) — about 1 percent by weight added to the metal — and these are inexpensive to produce and process, the team says. The composite can be manufactured at low cost by common industrial methods and is already being produced by the ton by manufacturers in Korea, for the automotive industry.

Even before exposure to radiation, the addition of this small amount of nanotubes improves the strength of the material by 50 percent and also improves its tensile ductility — its ability to deform without breaking — the team says.

“This is a proof of principle,” says Kang Pyo So. While the material used for testing was aluminum, the team plans to run similar tests with zirconium, a metal widely used for high-temperature reactor applications such as the cladding of nuclear fuel pellets. “We think this is a generic property of metal-CNT systems,” he says.

“This is a development of considerable significance for nuclear materials science, where composites — particularly oxide dispersion-strengthened steels — have long been considered promising candidate materials for applications involving high temperature and high irradiation dose,” says Sergei Dudarev, a professor of materials science at Oxford University in the U.K., who was not involved in this work.

Dudarev adds that this new composite material “proves remarkably stable under prolonged irradiation, indicating that the material is able to self-recover and partially retain its original properties after exposure to high irradiation dose at room temperature. The fact that the new material can be produced at relatively low cost is also an advantage.”

Sergei Kucheyev, a physicist at the Lawrence Livermore National Laboratory who also was not involved in this research, says, “These results could have important technological implications. They also point to our still-limited understanding of the physics of radiation defects at interfaces in technologically relevant regimes.”

The team also included researchers Sangtae Kim, Yang Yang, and Ziqiang Wang at MIT; Di Chen and Shao Lin at Texas A&M University; Jong Gil Park and Young Hee Lee at the Institute for Basic Science in South Korea; Rafael Gonzalez and Miguel Kiwi at the University of Chile; and Eduardo Bringa at the National University of Cuyo, in Argentina. The work was supported by the U.S. Department of Energy and the National Research Foundation of Korea.