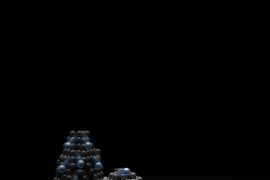 A surprising phenomenon has been found in metal nanoparticles: They appear, from the outside, to be liquid droplets, wobbling and readily changing shape, while their interiors retain a perfectly stable crystal configuration.

The research team behind the finding, led by MIT professor Ju Li, says the work could have important implications for the design of components in nanotechnology, such as metal contacts for molecular electronic circuits.

The results, published in the journal Nature Materials, come from a combination of laboratory analysis and computer modeling, by an international team that included researchers in China, Japan, and Pittsburgh, as well as at MIT.

The experiments were conducted at room temperature, with particles of pure silver less than 10 nanometers across — less than one-thousandth of the width of a human hair. But the results should apply to many different metals, says Li, senior author of the paper and the BEA Professor of Nuclear Science and Engineering.

Silver has a relatively high melting point — 962 degrees Celsius, or 1763 degrees Fahrenheit — so observation of any liquidlike behavior in its nanoparticles was “quite unexpected,” Li says. Hints of the new phenomenon had been seen in earlier work with tin, which has a much lower melting point, he says.

The use of nanoparticles in applications ranging from electronics to pharmaceuticals is a lively area of research; generally, Li says, these researchers “want to form shapes, and they want these shapes to be stable, in many cases over a period of years.” So the discovery of these deformations reveals a potentially serious barrier to many such applications: For example, if gold or silver nanoligaments are used in electronic circuits, these deformations could quickly cause electrical connections to fail.

The researchers’ detailed imaging with a transmission electron microscope and atomistic modeling revealed that while the exterior of the metal nanoparticles appears to move like a liquid, only the outermost layers — one or two atoms thick — actually move at any given time. As these outer layers of atoms move across the surface and redeposit elsewhere, they give the impression of much greater movement — but inside each particle, the atoms stay perfectly lined up, like bricks in a wall.

By contrast, if the droplets were to melt to a liquid state, the orderliness of the crystal structure would be eliminated entirely — like a wall tumbling into a heap of bricks.

Technically, the particles’ deformation is pseudoelastic, meaning that the material returns to its original shape after the stresses are removed — like a squeezed rubber ball — as opposed to plasticity, as in a deformable lump of clay that retains a new shape.

The phenomenon of plasticity by interfacial diffusion was first proposed by Robert L. Coble, a professor of ceramic engineering at MIT, and is known as “Coble creep.”  “What we saw is aptly called Coble pseudoelasticity,” Li says.

Now that the phenomenon has been understood, researchers working on nanocircuits or other nanodevices can quite easily compensate for it, Li says. If the nanoparticles are protected by even a vanishingly thin layer of oxide, the liquidlike behavior is almost completely eliminated, making stable circuits possible.

On the other hand, for some applications this phenomenon might be useful: For example, in circuits where electrical contacts need to withstand rotational reconfiguration, particles designed to maximize this effect might prove useful, using noble metals or a reducing atmosphere, where the formation of an oxide layer is destabilized, Li says.

The new finding flies in the face of expectations — in part, because of a well-understood relationship, in most materials, in which mechanical strength increases as size is reduced.

“In general, the smaller the size, the higher the strength,” Li says, but “at very small sizes, a material component can get very much weaker. The transition from ‘smaller is stronger’ to ‘smaller is much weaker’ can be very sharp.”

That crossover, he says, takes place at about 10 nanometers at room temperature — a size that microchip manufacturers are approaching as circuits shrink. When this threshold is reached, Li says, it causes “a very precipitous drop” in a nanocomponent’s strength.

The findings could also help explain a number of anomalous results seen in other research on small particles, Li says.

“The … work reported in this paper is first-class,” says Horacio Espinosa, a professor of manufacturing and entrepreneurship at Northwestern University who was not involved in this research. “These are very difficult experiments, which revealed for the first time shape recovery of silver nanocrystals in the absence of dislocation. ... Li’s interpretation of the experiments using atomistic modeling illustrates recent progress in comparing experiments and simulations as it relates to spatial and time scales. This has implications to many aspects of mechanics of materials, so I expect this work to be highly cited.”