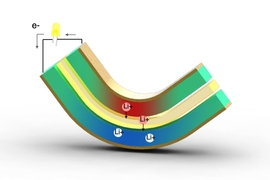 ↓ Download Image
Caption: This diagram illustrates the principle behind the proposed energy-harvesting system. Two metal electrodes made of lithium-alloyed silicon form a sandwich around a layer of electrolyte, a polymer that ions (charged atoms) can move across. When the sandwich is bent, unequal stresses cause lithium ions to migrate across the electrolyte, producing a compensating electron current that can be harnessed by an external circuit. When the bending is relaxed, the process reverses. The process can be repeated thousands of times with little change. (The amount of bending is greatly exaggerated in the diagram for clarity.)

Caption:
This diagram illustrates the principle behind the proposed energy-harvesting system. Two metal electrodes made of lithium-alloyed silicon form a sandwich around a layer of electrolyte, a polymer that ions (charged atoms) can move across. When the sandwich is bent, unequal stresses cause lithium ions to migrate across the electrolyte, producing a compensating electron current that can be harnessed by an external circuit. When the bending is relaxed, the process reverses. The process can be repeated thousands of times with little change. (The amount of bending is greatly exaggerated in the diagram for clarity.)
Credits:
Courtesy of the researchers

For many applications such as biomedical, mechanical, or environmental monitoring devices, harnessing the energy of small motions could provide a small but virtually unlimited power supply. While a number of approaches have been attempted, researchers at MIT have now developed a completely new method based on electrochemical principles, which could be capable of harvesting energy from a broader range of natural motions and activities, including walking.

The new system, based on the slight bending of a sandwich of metal and polymer sheets, is described in the journal Nature Communications, in a paper by MIT professor Ju Li, graduate students Sangtae Kim and Soon Ju Choi, and four others.

Most previously designed devices for harnessing small motions have been based on the triboelectric effect (essentially friction, like rubbing a balloon against a wool sweater) or piezoelectrics (crystals that produce a small voltage when bent or compressed). These work well for high-frequency sources of motion such as those produced by the vibrations of machinery. But for typical human-scale motions such as walking or exercising, such systems have limits.

“When you put in an impulse” to such traditional materials, “they respond very well, in microseconds. But this doesn’t match the timescale of most human activities,” says Li, who is the Battelle Energy Alliance Professor in Nuclear Science and Engineering and professor of materials science and engineering. “Also, these devices have high electrical impedance and bending rigidity and can be quite expensive,” he says.

By contrast, the new system uses technology similar to that in lithium ion batteries, so it could likely be produced inexpensively at large scale, Li says. In addition, these devices would be inherently flexible, making them more compatible with wearable technology and less likely to break under mechanical stress.

While piezoelectric materials are based on a purely physical process, the new system is electrochemical, like a battery or a fuel cell. It uses two thin sheets of lithium alloys as electrodes, separated by a layer of porous polymer soaked with liquid electrolyte that is efficient at transporting lithium ions between the metal plates. But unlike a rechargeable battery, which takes in electricity, stores it, and then releases it, this system takes in mechanical energy and puts out electricity.

When bent even a slight amount, the layered composite produces a pressure difference that squeezes lithium ions through the polymer (like the reverse osmosis process used in water desalination). It also produces a counteracting voltage and an electrical current in the external circuit between the two electrodes, which can be then used directly to power other devices.

Because it requires only a small amount of bending to produce a voltage, such a device could simply have a tiny weight attached to one end to cause the metal to bend as a result of ordinary movements, when strapped to an arm or leg during everyday activities. Unlike batteries and solar cells, the output from the new system comes in the form of alternating current (AC), with the flow moving first in one direction and then the other as the material bends first one way and then back.

This device converts mechanical to electrical energy; therefore, “it is not limited by the second law of thermodynamics,” Li says, which sets an upper limit on the theoretically possible efficiency. “So in principle, [the efficiency] could be 100 percent,” he says. In this first-generation device developed to demonstrate the electrochemomechanical working principle, he says, “the best we can hope for is about 15 percent” efficiency. But the system could easily be manufactured in any desired size and is amenable to industrial manufacturing process.

The test devices maintain their properties through many cycles of bending and unbending, Li reports, with little reduction in performance after 1,500 cycles. “It’s a very stable system,” he says.

Previously, the phenomenon underlying the new device “was considered a parasitic effect in the battery community,” according to Li, and voltage put into the battery could sometimes induce bending. “We do just the opposite,” Li says, putting in the stress and getting a voltage as output. Besides being a potential energy source, he says, this could also be a complementary diagnostic tool in electrochemistry. “It’s a good way to evaluate damage mechanisms in batteries, a way to understand battery materials better,” he says.

In addition to harnessing daily motion to power wearable devices, the new system might also be useful as an actuator with biomedical applications, or used for embedded stress sensors in settings such as roads, bridges, keyboards, or other structures, the researchers suggest.

“This work is very interesting and significant in the sense that it provides a novel approach to converting mechanical energy through an electrochemical route, using a simple design and device structure,” says Wu Wenzhuo, an assistant professor of industrial engineering at Purdue University who was not involved in this work. “More significantly, the output current from the demonstrated device is very large, with a long pulse duration. This is very important for practical applications, since most other mechanical energy harvesting methods suffer from the issues of small current output with short pulse duration.”

Prof. Ju Li and graduate students Sangtae Kim and Soon Ju Choi have developed a device that harvests human motion for electrical power, reports Krithika Varagur for The Huffington Post.  “This device will make it possible to harvest some of this otherwise-wasted potential into electricity,” explains Kim.

Fortune reporter Hilary Brueck writes that MIT researchers have developed a new flexible battery that can harness energy from a range of motions, including walking. Brueck explains that the “bendy battery works best with normal, human-scale activity, like walking, poking, and bending.”