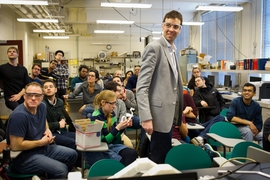 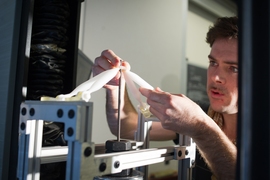 ↓ Download Image
Caption: Students in John Hart’s Additive Manufacturing class square off in a bridge-building competition to see who can design and print the sturdiest bridge. 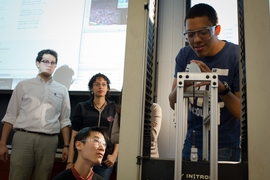 ↓ Download Image
Caption: “I ask them to think completely off the rails, into new stuff that’s never been printed before,” Hart says. “Then we can rein ourselves in and say, ‘What can we actually do?’” 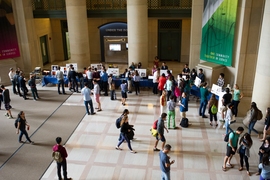 ↓ Download Image
Caption: At the end of the course, the students presented their final projects at an expo that was open to the public.

Caption:
Students in John Hart’s Additive Manufacturing class square off in a bridge-building competition to see who can design and print the sturdiest bridge.
Credits:
Photo courtesy of John Hart.

Caption:
“I ask them to think completely off the rails, into new stuff that’s never been printed before,” Hart says. “Then we can rein ourselves in and say, ‘What can we actually do?’”
Credits:
Photo courtesy of John Hart.

Caption:
At the end of the course, the students presented their final projects at an expo that was open to the public.
Credits:
Photo courtesy of John Hart.

Caption:
One project in particular was an instant draw: a 3-D printer that printed soft-serve ice cream. “I had never eaten something that came out of a project before,” Hart says. “It was cool.”

It’s been more than 30 years since the invention of 3-D printing, and yet in some ways the technology is still a frontier of unexplored potential.

Three-dimensional printing — and additive manufacturing in general — is the process of depositing material, layer by layer, in patterns determined by computer software, to precisely fabricate a three-dimensional object. The technology has been used to make hip and dental implants, as well as architectural models and aerospace tools, including a socket wrench that astronauts recently printed aboard the International Space Station.

For the most part, however, 3-D printing is a small-scale fabrication tool, used by engineers and designers to quickly print up a prototype. In recent years, access to more affordable desktop 3-D printers has helped fuel the maker movement, giving  students and hobbyists a chance to experiment with the technology.

John Hart, the Mitsui Career Development Associate Professor in Contemporary Technology and Mechanical Engineering at MIT, says early education on 3-D printing is the key to helping the technology expand as an industry. In 2013, Hart created an MIT graduate course, 2.S998 (Additive Manufacturing), that explores the fundamentals, applications, and implications of 3-D printing. The students attend lectures, learn to use commercial 3-D printers to fabricate custom objects, and square off in a bridge-building competition, to see who can design and print the sturdiest bridge with the lightest weight. Jamison Go, a graduate student in Mechanical Engineering, helped create the labs and mentor the projects.

Hart has described the course and its outcomes in an article in the journal Additive Manufacturing. The students’ class projects have led to several patents and entrepreneurial efforts.

Graduate students learned how to 3-D print ice cream in an additive manufacturing course at MIT.

“I very much enjoyed creating and teaching the course and I’m proud of what the students did, and what it means about the future potential of additive manufacturing” Hart says. “Also, I think it’s important for faculty across the world to share our approaches to teaching, and this can enable better hands-on education and accelerate innovation in design and manufacturing.”

When the students have familiarized themselves with the principles and processes of 3-D printing, Hart challenges them to reinvent the technology.

“I asked them to think completely off the rails, if they could conceive a 3-D printer that’s never been made before, or a useful material that can’t be printed using current printers.” Hart says. “We identify the biggest problems or creative opportunities, then rein ourselves in and say, ‘What can we actually do this semester?’”

As it turns out, Hart and the students determined that 3-D printers can be fashioned to print some rather unexpected materials. The students’ final projects have included printers that they built specially to print molten glass and even soft-serve ice cream. The course not only educates students but also has shown Hart what the future of 3-D printing might hold.

“When you look at even the most basic 3-D printer, it is a vehicle to learn about machine design, and software, and materials processing,” Hart says. ”That’s a very hands-on, eyes-on way to learn and innovate.”

For those students who have taken Hart’s Additive Manufacturing course, the experience is a concentrated, semester-long dose of 3-D printing. The course begins with lectures on the technology’s fundamental principles, along with labs in which students can experiment with desktop printers.

As the first lab assignment, the students were asked to design and print a part, or an assembly of parts, that would be difficult to fabricate using traditional manufacturing methods. For these parts, students chose to print personalized accessories for electronics, small pieces of jewelry, a cable organizer, and a case for a custom circuit board. After printing their parts, the students inspected them for defects, assessing the limitations of the associated 3-D printing process.

After the students became comfortable with using the 3-D printers, Hart challenged them with a bridge-building competition, to 3-D print a multipart bridge that had the highest ratio of strength to weight.  Designs ranged in their internal composition and overall shape, including one design that was inspired by the bone structures in bird beaks.  The winning design, however, was the simplest and could be printed as a single piece and unraveled to span the specified dimensions.

For the course’s capstone project, students were asked to “conceptualize, justify, design, and prototype a novel contribution to additive manufacturing technology,” according to Hart’s paper. Hart kicked off the project by suggesting themes, including printing novel materials, such as food, biomaterials or composites, improving the rate and quality of 3-D printing, or incorporating scanning into the 3-D printing process.

“Beyond the knowledge and ideas, the students’ fearless attitude and ability to hack together quick prototypes and use spaces ranging from research labs to maker spaces was essential  to building hardware and making projects come to life,” Hart says.

From the freezer to the flame

At the end of the course, the students presented their final projects at an expo that was open to the public. One project in particular was an instant draw: a 3-D printer that printed soft-serve ice cream. Students used a low-cost printer, flipped it over, and placed it inside a small freezer, into which they fed a stream of ice cream solution from a rotating Cuisinart. To rapidly freeze the ice cream as it printed, the students also piped in a feed of liquid nitrogen. With this setup, they printed ice cream in three-dimensional patterns of stars and circles.

Another student team, including an experienced glass blower, designed a printer to fabricate sculptures out of molten glass — a design for which they have since filed a patent.

“They built their printer entirely from scratch and did experiments in the MIT Glass Lab,” Hart says. “They were scooping molten glass out of the furnace and pouring it into the printer, and standing next to it with torches as they learned how to control the process.”

Hart hopes that the article about the class will help other institutions grow educational initiatives in 3-D printing, which is essential to expand its capabilities and applications. In addition to the graduate course, he also offers a one-week summer program for professionals, which has attracted executives, engineers, and designers from a wide range of disciplines. He’s also hoping to form an industry consortium at MIT to support efforts in additive manufacturing.

“Through our teaching and research, we hope to open up new opportunities for 3-D printing,” Hart says. “To me, it’s not clear yet what all those opportunities are. It’s only a matter of time for the creativity of the world to figure that out.”

Physicist is honored with the RSEF’s highest scientific honor for his work on twistronics.

With years of experience under its belt, MIT Medical works with the campus community to limit the spread of Covid-19.

MIT researchers find blocking the expressions of the genes XPA and MK2 enhances the tumor-shrinking effects of platinum-based chemotherapies in p53-mutated cancers.