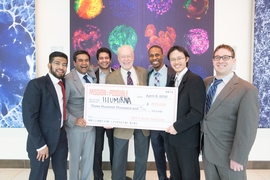 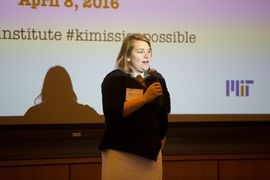 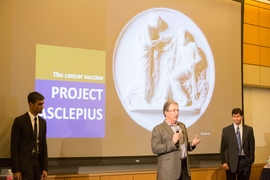 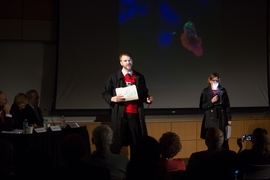 A unique pitch competition hosted by the MIT Koch Institute for Integrative Cancer Research on Friday awarded a team of researchers $300,000 to further develop — and potentially commercialize — a diagnostic platform that promises to catch leukemic cells in blood tests at very early stages of the disease.

The “Shark Tank”-style competition, dubbed “Mission: Possible,” called upon Koch Institute researchers to develop innovations that aid in the prevention and early detection of cancer, for a shot at a one-year $300,000 research grant. Teams of professors, students, and postdocs submitted ideas in January. On Friday, six finalist teams pitched their innovations to a panel of six judges from academia and industry during a grand finale event held in the Koch Institute’s auditorium. A capacity crowd of local entrepreneurs, academics, venture capitalists, and members of biotech industry were in attendance.

Winning team IllumiRNA pitched an idea for a diagnostic platform that profiles individual cells in blood tests, to identify single leukemic cells among a sea of normal cells — like finding a needle in a haystack. “Ultimately, cancer is a disease of single cells gone awry, so we have to meet it at a single-cell level,” said team member Salil Garg, a postdoc in the lab of Institute Professor Phillip Sharp, who was also part of the team.

Other innovations pitched during the event included: a universal vaccine for cancers, an ingestible pill that can be used to screen for gastrointestinal (GI) cancers, nanosensors that travel to lymph nodes and out through the urine to track cancer’s progress, advanced infrared-imaging technology that tracks the movement of immune cells to tumors, and a method for treating and preventing cancer through engineering antigens.

In her welcoming remarks, Koch Institute Executive Director Anne Deconinck, who co-organized the event, said all of the multidisciplinary teams represented “a strong community spirit and the power of collaboration, but also the passion and dedication that all of our trainees and faculty feel for our mission, which is to make a difference in the fight against cancer.”

In his pitch, Garg introduced a hypothetical leukemia patient, “Jane,” who had a normal complete blood count (CBC) test in 2015 yet was diagnosed with late-stage leukemia a year later. CBCs reveal abnormally high amounts of white blood cells, which may indicate the presence of leukemia. But CBCs are only effective with large quantities of leukemic blood cells, Garg said, and in 2015 “Jane” had only a few leukemic cells. “The complete blood count test can’t find these [few leukemic cells], because they’re rare and they don’t throw off the overall count,” Garg said.

But the team found that the microRNA (miRNA) molecule is “the perfect biomarker” for early detection of leukemia in single cells, Garg said. Small changes in levels of microRNA, which regulate gene expression, change the function of the thousands of genes in a cell. “That makes … the microRNA profile of the cell a microcosm of what the cell is actually going to do,” he said.

IllumiRNA’s platform includes a microfluidics device that sorts a population of cells from a blood sample into “droplets.” A special magnet in the device extracts the miRNA from each individual cell. Each miRNA is given a unique “barcode” that tells which cell the molecule came from. Sequencing that miRNA gives a profile of each cell’s abnormal or normal behavior. “Therefore, [we can tell] whether or not it’s likely to be a cancerous cell or a normal, healthy cell,” said team member Suman Bose, a postdoc fellow in the labs of David H. Koch (1962) Institute Professor Robert Langer and chemical engineering professor Dan Anderson, who were both part of the team.

The grant will go toward building the microfluidics device over the next couple of months and hiring researchers dedicated to the project, with the aim of rapidly gathering data to validate the platform’s efficacy. “This [grant] will enable us to really crank through generating that data,” Garg told MIT News.

Garg added that IllumiRNA conceived of their platform specifically for the competition. “We wouldn’t have thought of it otherwise,” he said. “Although, to be honest, we became so excited about this and have such a good team, we were going to go through with this regardless of what happened today.”

In a surprising turn, the team Project Asclepius was taken out of the running during the judges’ deliberations — because an outside funder, the Advanced Medical Research Foundation, decided to support the project. The decision came from the foundation’s director, Nile Albright, who was in the audience during the team’s presentation.

Project Asclepius — formed by Anderson, Koch Institute Director and David H. Koch Professor of Biology Tyler Jacks, and trainees in their labs — has the ambitious goal of developing “a protective vaccine in which we train the immune system to fight cancer as it would an infectious disease,” said team member Omar Khan, a postdoc in Anderson’s lab.

To do so, the team created a nanoparticle-based prophylactic vaccine loaded with specific proteins produced only by cancers. The body will recognize these proteins as threats and produce immune cells to fight the cells expressing the proteins. “As soon as a tumor begins to form, the immune cells will hone into the tumors and destroy them,” said team member David Canner, a graduate student in the Jacks lab.

Each year, the Koch Institute awards small research grants to faculty to support novel, collaborative ideas. For the Koch Institute’s five-year anniversary at its current location, however, Deconinck and colleagues decided to up the funding and showcase some ambitious projects in spectacular fashion.

In 2011, the Koch Institute opened in its MIT East Campus location, to bring together life-scientists and engineers to collaborate under one roof. Deconinck said the competition highly encouraged that same “convergence approach,” with each team showing strong collaboration across labs and disciplines. “It seemed like the perfect way to celebrate five years together in one building,” Deconinck said.

The grant was funded by the Frontier Research Program, which is funded by donors to support early, innovative, and even risky research ideas that have huge potential for high impact. Such research may be too early to earn grants from, say, the National Institutes of Health, Deconinck said, “yet is absolutely critical and the type of work that MIT is famous for, the type of work that was presented by our trainees and faculty on Friday morning — the bold, creative, innovative.”

A team of MIT researchers has been selected as the winner of the Koch Institute research-grant pitch competition for their work on developing a diagnostic platform for early-stage leukemia, reports Amanda Hoover for Boston.com.  Hoover explains that the diagnostic method would “single out individual cells during blood tests, highlighting those affected by leukemia.”