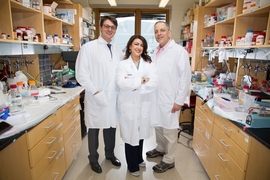 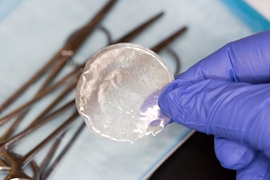 ↓ Download Image
Caption: Researchers engineered a flexible polymer film that is made from a polymer called PLGA. The film can be rolled into a narrow tube and inserted through a catheter. Once the film reaches the pancreas, it unfolds and conforms to the shape of the tumor.
Credits: Photo: Bryce Vickmark 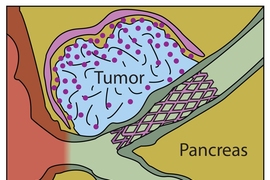 ↓ Download Image
Caption: MIT researchers have designed a drug-delivering material that could be used to coat stents, helping the bile duct to remain clear in patients with pancreatic cancer. 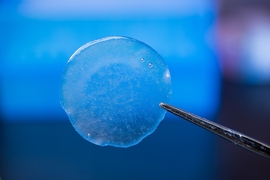 ↓ Download Image
Caption: Researchers engineered a flexible polymer film that is made from a polymer called PLGA. The film can be rolled into a narrow tube and inserted through a catheter. Once the film reaches the pancreas, it unfolds and conforms to the shape of the tumor.
Credits: Photo: Bryce Vickmark

Caption:
Researchers engineered a flexible polymer film that is made from a polymer called PLGA. The film can be rolled into a narrow tube and inserted through a catheter. Once the film reaches the pancreas, it unfolds and conforms to the shape of the tumor.
Credits:
Photo: Bryce Vickmark

Caption:
MIT researchers have designed a drug-delivering material that could be used to coat stents, helping the bile duct to remain clear in patients with pancreatic cancer.
Credits:
Courtesy of the researchers

Pancreatic cancer is the third leading cause of cancer deaths in the United States, in part because it is very difficult for chemotherapy drugs to reach the pancreas, which is located deep within the abdomen.

To help overcome that obstacle, researchers from MIT and Massachusetts General Hospital have now developed a small, implantable device that delivers chemotherapy drugs directly to pancreatic tumors. In a study of mice, they found that this approach was up to 12 times more effective than giving chemotherapy drugs by intravenous injection, which is how most pancreatic cancer patients are treated.

“It’s clear there is huge potential for a device that can localize treatment at the disease site,” says Laura Indolfi, a postdoc in MIT’s Institute for Medical Engineering and Science (IMES) and the MGH Cancer Center, who is one of the study’s lead authors. “You can implant our device to achieve a localized drug release to control tumor progression and potentially shrink [the tumor] to a size where a surgeon can remove it.”

This thin, flexible film could also be adapted to treat other hard-to-reach tumors, according to the researchers, who described the device in the journal Biomaterials. Matteo Ligorio, an MGH research fellow, and David Ting, an MGH Cancer Center assistant physician, are also lead authors of the paper. Senior authors are Elazer Edelman, the Thomas D. and Virginia W. Cabot Professor of Health Sciences and Technology at MIT; Robert Langer, the David H. Koch Institute Professor and a member of the Koch Institute for Integrative Cancer Research; and Jeffrey Clark, director of clinical trials support at MGH.

Motivated in part by a call for “Bridge Project” grant applications, the MIT and MGH team launched this project a little more than three years ago with a focus on pancreatic cancer, which has a five-year overall survival rate of less than 6 percent. Injections of chemotherapy drugs often fail not only because the pancreas is so deep within the body, but also because pancreatic tumors have few blood vessels, making it harder for drugs to get in. Also, pancreatic tumors are often surrounded by a thick, fibrous coating that keeps drugs out.

In hopes that getting drugs directly to the tumor site would improve treatment, the researchers engineered a flexible polymer film that is made from a polymer called PLGA, which is widely used for drug delivery and other medical applications. The film can be rolled into a narrow tube and inserted through a catheter, so surgically implanting it is relatively simple. Once the film reaches the pancreas, it unfolds and conforms to the shape of the tumor.

“Because it’s very flexible it can adapt to whatever size and shape the tumor will have,” Indolfi says.

Drugs are embedded into the film and then released over a preprogrammed period of time. The film is designed so that the drug is only secreted from the side in contact with the tumor, minimizing side effects on nearby organs.

The researchers compared two groups of mice carrying transplanted human pancreatic tumors. One group received the drug-delivery implant loaded with the chemotherapy drug paclitaxel, and the other received systemic injections of the same drug for four weeks, which mimics the treatment human patients usually receive.

In mice with the drug-delivery implant, tumor growth slowed, and in some cases tumors shrank. The localized treatment also increased the amount of necrotic tissue (dead cancer cells that are easier to remove surgically). Additionally, by acting as a physical barrier, the film was able to reduce metastasis to nearby organs.

The researchers also found that after four weeks, the concentration of paclitaxel in the tumors of mice with the implanted device was five times greater than in mice that received injections. Also, because there are so few blood vessels in pancreatic tumors, the drug tended to remain there and not spread to nearby organs, preventing toxic effects in healthy tissues.

“This combination of local, timed, and controlled release, coupled with the judicious use of critical compounds, could address the vital problems that pancreatic cancer has provided as obstacles to pharmacological therapy,” says Edelman, who is also a member of MIT’s Institute for Medical Engineering and Science and the Koch Institute.

This type of approach could help to extend the lifespan of pancreatic cancer patients with inoperable tumors and make their lives less painful, says Mauro Ferrari, the president and CEO of the Houston Methodist Research Institute, who was not involved in the research.

“The notion of being able to contain localized damage is very important,” Ferrari says. “There is a chance to benefit a lot of patients.”

The researchers are now preparing to design a clinical trial for human patients. While they began this project with a focus on pancreatic cancer, they expect that this approach could also be useful in treating other tumors that are difficult to reach, such as tumors of the gastrointestinal tract.

“The greatest benefit of this device is the ability to implant it with minimally invasive procedures so we can give a tool to oncologists and surgeons to reach tumors that otherwise would be difficult to reach,” Indolfi says.

“The prospect of a novel delivery platform also opens the door to using a wide range of promising anticancer agents that had encouraging preclinical data but could not make it to patients due to systemic dose-limiting toxicities,” Ting says.

The film could also be used as a coating for a stent. Pancreatic cancer patients often suffer from blockage of the bile duct, which interferes with digestion and is very painful. The duct can be reopened with a stent but usually gets blocked again eventually, requiring the patient to have the old stent removed and a new one inserted.

Coating stents with a drug-releasing film could help prevent the cancer cells from spreading into the duct and blocking it again. “We can extend the lifespan of these devices,” Indolfi says. “Rather than being replaced every month they could be replaced every six months, or once a year.”

The researchers have launched a company, PanTher Therapeutics, to further develop the device for patient use. The research was funded by the Koch Institute and Dana-Farber/Harvard Cancer Center Bridge Project, the Burroughs Wellcome Fund, the Koch Institute Cancer Center Support Grant from the National Cancer Institute, the Deshpande Center for Innovation at MIT, and the American-Italian Cancer Foundation.