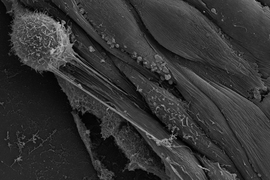 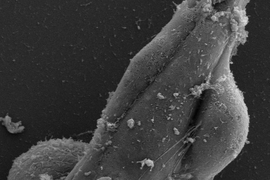 Scientists at MIT and Massachusetts General Hospital have discovered how cancer cells latch onto blood vessels and invade tissues to form new tumors — a finding that could help them develop drugs that inhibit this process and prevent cancers from metastasizing.

Cancer cells circulating in the bloodstream can stick to blood vessel walls and construct tiny “bridges” through which they inject genetic material that transforms the endothelial cells lining the blood vessels, making them much more hospitable to additional cancer cells, according to the new study.

The researchers also found that they could greatly reduce metastasis in mice by inhibiting the formation of these nanobridges.

“Endothelial cells line every blood vessel and are the first cells in contact with any blood-borne element. They serve as the gateway into and out of tumors and have been the focus of intense research in vascular and cancer biology. These findings bring these two fields together to add greater insight into control of cancer and metastases,” says Elazer Edelman, the Thomas D. and Virginia W. Cabot Professor of Health Sciences and Technology, a member of MIT’s Institute for Medical Engineering and Science and of the Koch Institute for Integrative Cancer Research, and one of the leaders of the research team.

The lead author of the paper, which appears in the Dec. 16 issue of Nature Communications, is Yamicia Connor, a graduate student in the Harvard-MIT Division of Health Sciences and Technology (HST). The paper’s senior author is Shiladitya Sengupta, an assistant professor at HST and at Harvard Medical School.

Metastasis is a multistep process that allows cancer to spread from its original site and form new tumors elsewhere in the body. Certain cancers tend to metastasize to specific locations; for example, lung tumors tend to spread to the brain, and breast tumors to the liver and bone.

To metastasize, tumor cells must first become mobile so they can detach from the initial tumor. Then they break into nearby blood vessels so they can flow through the body, where they become circulating tumor cells (CTCs). These CTCs must then find a spot where they can latch onto the blood vessel walls and penetrate into adjacent tissue to form a new tumor.

Blood vessels are lined with endothelial cells, which are typically resistant to intruders.

“Once we saw that these structures allowed for a ubiquitous transfer of a lot of different materials, microRNAs were an obvious interesting molecule because they’re able to very broadly control the genome of a cell in ways that we don’t really understand,” Connor says. “That became our focus.”

MicroRNA, discovered in the early 1990s, helps a cell to fine-tune its gene expression. These strands of RNA, about 22 base pairs long, can interfere with messenger RNA, preventing it from being translated into proteins.

In this case, the researchers found, the injected microRNA makes the endothelial cells “sticky.” That is, the cells begin to express proteins on their surfaces that attract other cells to adhere to them. This allows additional CTCs to bind to the same site and penetrate through the vessels into the adjacent tissue, forming a new tumor.

“It’s almost like the cancer cells are cooperating with each other to facilitate migration,” Sengupta says. “You just need maybe 1 percent of the endothelial cells to become sticky, and that’s good enough to facilitate metastasis.”

Non-metastatic cancer cells did not produce these invasive nanobridges when grown on endothelial cells.

Erkki Ruoslahti, a professor of cell, molecular, and developmental biology at the University of California at Santa Barbara, says that the discovery is an important advance in understanding tumor metastasis.

“I found it particularly interesting that the transfer of regulatory macromolecules from tumor cells to endothelial cells via intercellular nanotubes appears to be more effective (at least over relatively short distances) than exosome-mediated transfer, which has received a lot of attention lately,” says Ruoslahti, who was not part of the research team.

The nanobridges are made from the proteins actin and tubulin, which also form the cytoskeleton that gives cells their structure. The researchers found that they could inhibit the formation of these nanobridges, which are about 300 microns long, by giving low doses of drugs that interfere with actin.

When the researchers gave these drugs to mice with tumors that normally metastasize, the tumors did not spread.

Sengupta’s lab is now trying to figure out the mechanism of nanobridge formation in more detail, with an eye toward developing drugs that act more specifically to inhibit the process.

“If we can first understand how these structures are formed, then we can try to design targeted therapies to inhibit their formation, which could be a promising new area for developing drugs that specifically target metastasis,” Connor says.

Putting up a struggle against cancer