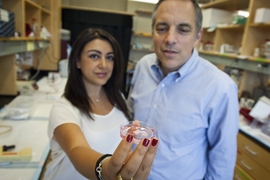 ↓ Download Image
Caption: Laura Indolfi, left, holds up a sample of a sponge-like scaffold that she and Elazer Edelman, right, used to show that implanted cells’ therapeutic properties depend on their shape.
Credits: Photo: Patrick Gillooly 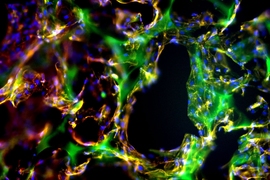 ↓ Download Image
Caption: This image shows endothelial cells on three-dimensional scaffolds: the scaffold is in green, the cells in red and the nucleus in blue.
Credits: Image: Laura Indolfi

Caption:
This image shows endothelial cells on three-dimensional scaffolds: the scaffold is in green, the cells in red and the nucleus in blue.
Credits:
Image: Laura Indolfi

Caption:
This image shows endothelial cells on three-dimensional scaffolds: the scaffold is in green, the cells in red and the nucleus in blue.
Credits:
Image: Laura Indolfi 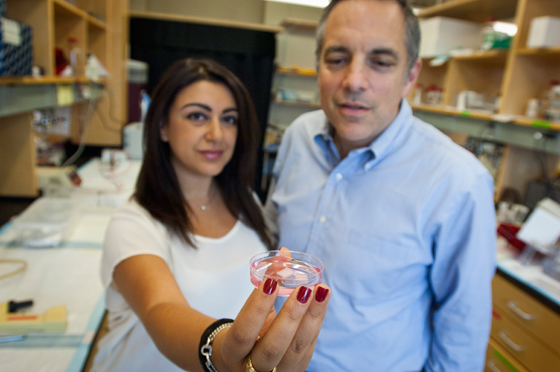 Laura Indolfi, left, holds up a sample of a sponge-like scaffold that she and Elazer Edelman, right, used to show that implanted cells’ therapeutic properties depend on their shape.
Photo: Patrick Gillooly

Tissue implants made of cells grown on a sponge-like scaffold have been shown in clinical trials to help heal arteries scarred by atherosclerosis and other vascular diseases. However, it has been unclear why some implants work better than others.

MIT researchers led by Elazer Edelman, the Thomas D. and Virginia W. Cabot Professor of Health Sciences and Technology, have now shown that implanted cells’ therapeutic properties depend on their shape, which is determined by the type of scaffold on which they are grown. The work could allow scientists to develop even more effective implants and also target many other diseases, including cancer.

“The goal is to design a material that can engineer the cells to release whatever we think is most appropriate to fight a specific disease. Then we can implant the cells and use them as an incubator,” says Laura Indolfi, a postdoc in Edelman’s lab and lead author of a paper on the research recently published online in the journal Biomaterials.

Aaron Baker, a former postdoc in Edelman’s lab and now an assistant professor at the University of Texas at Austin, is also an author of the paper.

For the past 20 years, Edelman has been working on using endothelial cells grown on scaffolds made of collagen as implantable devices to treat blood vessel damage. Endothelial cells line the blood vessels and regulate important process such as tissue repair and inflammation by releasing molecules such as chemokines, small proteins that carry messages between cells.

Several of the devices have been tested in clinical trials to treat blood vessel damage; in the new Biomaterials study, Edelman and Indolfi set out to determine what makes one such tissue scaffold more effective than another. In particular, they were interested in comparing endothelial cells grown on flat surfaces and those grown on more porous, three-dimensional scaffolds. The cells grown on 3-D structures tended to be more effective at repairing damage and suppressing inflammation.

The researchers found that cells grown on a flat surface take on a round shape in which the cells’ structural components form a ring around the perimeter of the cell. However, when cells are grown on a scaffold with surfaces of contact whose dimensions are similar in size to the cells, they mold to the curved surfaces, assuming a more elongated shape. In those cells, the structural elements — made of bundles of the protein actin — run parallel to each other.

Those shapes determine what types of chemokines the cells secrete once implanted into the body. In this study, the researchers focused on a chemokine known as MCP1, which recruits inflammatory cells called monocytes.

The researchers also identified biomarkers that correlate the cells’ shape, chemokine secretion and behavior. One such parameter is the production of a focal adhesion protein, which helps cells to stick to surfaces. In cells grown on a flat surface, this adhesion protein, known as vinculin, accumulates around the edges of the cell. However, in cells grown on a 3-D surface, the protein is evenly distributed throughout the cell. These distribution patterns serve as molecular cues to inhibit or activate the pathway that recruits monocytes.

The study goes a long way toward answering the question of how to engineer immune responses through endothelial cell transplantation, says Donald Elbert, an associate professor of biomedical engineering at Washington University in St. Louis. “Cells exhibit profoundly different responses based on their local environment, and this report demonstrates an important molecular mechanism for the improved response within intricately designed 3-D scaffolds,” says Elbert, who was not involved in the research.

The findings could help scientists manipulate their scaffolds to tailor cells to specific applications. One goal is using implanted cells to recruit other body cells that will do a particular task, such as inducing stem cells to differentiate into a certain type of cell. “By designing the matrix before we seed the cells, we can engineer which factors they are going to secrete,” Indolfi says.

The work should also help researchers improve on existing tissue-engineered devices and test new ones, Edelman says. “Without this kind of understanding, we can’t extend successful technologies to the next generation,” he says.

The research was funded by the National Institutes of Health, the American Heart Association, and the David H. Koch Foundation.