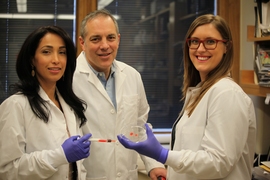 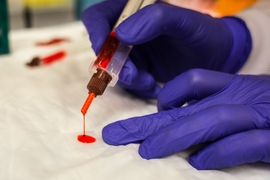 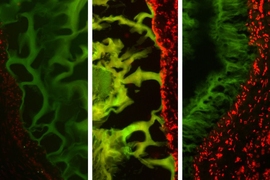 ↓ Download Image
Caption: MIT researchers tested their tissue adhesive in three types of tissue: (left to right) healthy colon tissue, colon tissue inflamed with colitis, and cancerous colon tissue. The tissue is shown in red, and the adhesive material is green.
Credits: Courtesy of the researchers

Caption:
MIT researchers tested their tissue adhesive in three types of tissue: (left to right) healthy colon tissue, colon tissue inflamed with colitis, and cancerous colon tissue. The tissue is shown in red, and the adhesive material is green.
Credits:
Courtesy of the researchers

After undergoing surgery to remove diseased sections of the colon, up to 30 percent of patients experience leakage from their sutures, which can cause life-threatening complications.

Many efforts are under way to create new tissue glues that can help seal surgical incisions and prevent such complications; now, a new study from MIT reveals that the effectiveness of such glues hinges on the state of the tissue in which they are being used.

The researchers found that a sealant they had previously developed worked much differently in cancerous colon tissue than in colon tissue inflamed with colitis. The finding suggests that for this sealant or any other kind of biomaterial designed to work inside the human body, scientists must take into account the environment in which the material will be used, instead of using a “one-size fits all” approach, according to the researchers.

“This paper shows why that mentality is risky,” says Natalie Artzi, a research scientist at MIT’s Institute for Medical Science and Engineering (IMES) and senior author of a paper describing the findings in the Jan. 28 online edition of Science Translational Medicine. “We present a new paradigm by which to design and examine materials. Detailed study of tissue and biomaterial interactions can open a new chapter in precision medicine, where biomaterials are chosen and rationally designed to match specific tissue types and disease states.”

After characterizing the adhesive material’s performance in different diseased tissues, the researchers created a model that allows them to predict how it will work in different environments, opening the door to a more personalized approach to treating individual patients.

Elazer Edelman, the Thomas D. and Virginia W. Cabot Professor of Health Sciences and Technology and a member of IMES, is also a senior author of the paper. The paper’s lead authors are graduate student Nuria Oliva and former graduate student Maria Carcole.

Artzi and Edelman originally developed this tissue glue several years ago by combining two polymers — dextran (a polysaccharide) and a highly branched chain called dendrimer. In a 2009 paper, the researchers demonstrated that such adhesives work better when tailored to specific organs. In their new paper, they explored what happens when an adhesive is used in the same organ but under different disease conditions.

Further studies of the molecular interactions between the adhesive and tissue explained those differences in behavior. The tissue glue works through a system where molecules in the adhesive serve as “keys” that interact with “locks” — chemical structures called amines found in abundance in structural tissue known as collagen.

When enough of these locks and keys bind each other, the adhesive forms a tight seal. This system is disrupted in colitic tissue because the inflammation breaks down collagen. The more severe the inflammation, the less adhesion occurs. However, cancerous tissue tends to have excess collagen, so the adhesive ends up working better than in healthy tissue.

“Now we show that adhesive-material performance is not organ-dependent, but rather, disease type and state-dependent,” says Artzi, who is also an assistant professor at Harvard Medical School.

Using this data, the researchers created a model to help them alter the composition of the material depending on the circumstances. By changing the materials’ molecular weight, the number of keys attached to each polymer, and the ratio of the two polymers, the researchers can tune it to perform best in different types and states of tissue.

An inherent property of the adhesive is that any unused keys are absorbed back into the polymer, preventing them from causing any undesired side effects. This would allow the researchers to create two or three different versions that could cover a wide range of tissues.

“We can take a biopsy from a patient for a quick readout of disease state that would serve as an input for our model, and the output is the precise material composition that should be used to attain adequate adhesion,” Artzi says. “This exercise can be done in a clinical setting.”

Joseph Bonventre, chief of the renal unit and director of the bioengineering division at Brigham and Women’s Hospital in Boston, agrees that the study represents an important step toward a more personalized approach.

“You want the best adhesive possible, and they really show how changes in the characteristics of the tissue will alter the adhesive character,” says Bonventre, who was not involved in the research. “They’re moving in the direction of doing a quick test in the operating room and selecting the biomaterial most likely to be effective, rather than developing biomaterials that try to work for all conditions.”

Doctors have begun using this kind of personalized approach when choosing drugs that match individual patients’ genetic profiles, but it has not yet spread to the selection of biomaterials such as tissue glue. The MIT team now hopes to move the sealant into clinical trials and has founded a company to help that process along.

“It’s something that we want to do as rapidly as possible,” Edelman says. “We’re excited. It’s not often that you have a technology that is this close to clinical introduction.”

The research was funded by the National Institutes of Health and the MIT Deshpande Center for Technological Innovation.