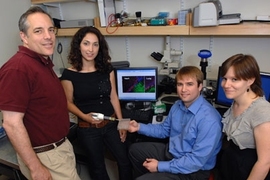 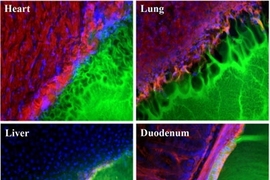 Surgical adhesives, which can be used to seal tissues after an operation or to repair wounds, are becoming increasingly important parts of a doctor's toolkit. However, their one-size-fits-all nature means that existing adhesives, or glues, work well in some cases but not in others.

MIT researchers aim to change that with glues tailored to specific tissues. In a recent issue of Advanced Materials, they identified for the first time how one kind of glue material bonds to tissue and how that adhesion varies depending on the tissue involved, from the intestine to the lung. They then showed how by adjusting certain properties of the materials it was possible to create a range of adhesives optimized for specific tissues and applications.

"The delineation of tissue-specific mechanisms for material adhesion leads the way for tailoring materials to individual needs and applications. This exciting work may well change the clinical use and continued evolution of soft-tissue sealants and adhesive materials," said Elazer R. Edelman, principal investigator and MIT's Thomas D. and Virginia W. Cabot Professor of Health Sciences and Technology.

Adhesive sealants could improve patient care and reduce healthcare costs by cutting medical complications after surgery, such as leakage through incisions, and improved wound healing, according to Natalie Artzi, a postdoctoral associate who led the research in Edelman's lab.

Although there is already a billion-dollar market for such adhesives, "they haven't reached their true potential," Artzi said. Existing materials have limitations that often force doctors to compromise between adhesion strength and tissue reaction. For example, said Artzi, for a given tissue, the material may be adhesive but release toxins that could affect healing. Alternatively, the material could be quite tissue compatible, but degrade quickly, becoming non-adhesive. If the glue doesn't work, a doctor must switch to sutures or staples.

The problem, according to the MIT team is that while surgical adhesives rely on intimate interactions between the adhesive and the tissue in question, the properties of the target tissue have been largely ignored in designing adhesives. Instead, "one general formulation is proposed for application to the full range of soft tissues across diverse clinical applications," Artzi and colleagues wrote in their Advanced Materials paper.

The new work characterized a variety of interactions between one kind of glue (hyrogels composed of polyethylene glycol and dextran aldehyde, or PEG: dextran for short) and tissue from a rat's heart, lung, liver and duodenum (the first section of the intestine). The team found, for example, that the glue worked well with tissue from the duodenum, but poorly with that from the lung.

They then went on to "identify the functional groups in the material that are responsible for adhesion with tissue functional groups, and created a model to optimize adhesion for each tissue," Artzi said. In particular the paper explains how variation of chemical reactive groups in the material could be matched to the variability in the density of respective reactive groups on different tissues to regulate tissue-material interaction.

The team will use these findings to "develop a platform of adhesive materials" for specific tissues. Although it could take three to five years before the work translates into a product, "the concept is there," she concluded.

In addition to Edelman and Artzi, co-authors of the paper are Tarek Shazly (co-first author with Artzi and a graduate student in MIT's Department of Materials Science and Engineering), Aaron B. Baker (a postdoctoral associate in Edelman's lab), and Adriana Bon, now at the Universitat Ramon Llull (Spain).

The work was supported by the MIT-DuPont Alliance and the National Institutes of Health, as well as the Philip Morris External Research Program.