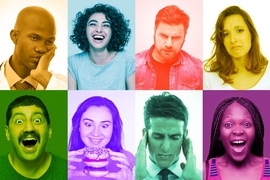 In a study of worms, MIT neuroscientists have discovered a gene that plays a critical role in controlling the switch between alternative behavioral states, which for humans include hunger and fullness, or sleep and wakefulness.

This gene, which the researchers dubbed vps-50, helps to regulate neuropeptides — tiny proteins that carry messages between neurons or from neurons to other cells. This kind of signaling is important for controlling physiology and behavior in animals, including humans. Deletions of the human counterpart of the vps-50 gene have been found in some people with autism.

“Given what is reported in this paper about how the gene works, coupled with findings by others concerning the genetics of autism, we suggest that the disruption of the function of this gene could promote autism,” says H. Robert Horvitz, a David H. Koch Professor of Biology and a member of MIT’s McGovern Institute for Brain Research.

Horvitz and Martha Constantine-Paton, an MIT professor of brain and cognitive sciences and member of the McGovern Institute, are the senior authors of the study, which appears in the March 3 issue of the journal Current Biology. The paper’s lead authors are former MIT postdocs Nicolas Paquin and Yasunobu Muruta.

Neuropeptides, which are involved in brain functions such as reward, metabolism, and learning and memory, are released from cellular structures called dense-core vesicles.

In the new study, the researchers found that the vps-50 gene encodes a protein that is important in the generation of such vesicles and in the release of neuropeptides from them.

They discovered the protein in the worm Caenorhabditis elegans, where it is found primarily in nerve cells. In those cells, vps-50 associates with both synaptic vesicles and dense-core vesicles, which release neurotransmitters such as dopamine and serotonin. The researchers showed that vps-50 is required for maturation of the dense-core vesicles and also regulates activity of a proton pump that acidifies the vesicles. Without the proper acidity level, the vesicles’ ability to produce neuropeptides is impaired.

The researchers also found distinctive behavioral effects in C. elegans worms, which normally change their speed depending on food availability and whether they have recently eaten.

“Worms are the fastest when food (bacteria) is absent, presumably because they are looking for food,” Paquin says. “When they reach food, they slow down, but when you make them hungry for 30 minutes before putting them on food, they slow down even more.”

Worms lacking vps-50 behaved as if they were hungry — moving slowly through a food-rich area even when they were well fed, the researchers found. This suggests that the worms without vps-50 are unable to signal that they are full and continue to behave as if they are hungry. The researchers also found an equivalent gene in mice and showed that it can compensate for loss of the worm version of vps-50, showing that the two genes have the same function.

One important question raised by the study is how the mouse and human versions of vps-50 affect behavior in those animals, Horvitz says. Although this study focused on switching between hunger and fullness, neuropeptide signaling has been previously shown to control other alternative behaviors such as sleep and wakefulness and also to control social behaviors, such as anxiety.

The researchers suggest that studies of vps-50 might shed light on aspects of autism, because the human version of the gene is missing in some people with autism. Furthermore, a protein known as UNC-31, which is also located in dense-core vesicles has also been linked with autism in humans and mice. When mutated in worms, UNC-31 produces behavioral effects similar to those caused by vps-50 mutations.

“For these reasons, we hope that our studies of vps-50 will provide insights into human neuropsychiatric disorders,” Horvitz says.

The research was funded by the National Institutes of Health and the Simons Center for the Social Brain at MIT.