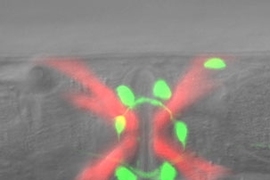 On the surface, the tiny roundworm bears little resemblance to a person. Its nervous system, for example, has just 302 neurons to our 100 billion. Yet it uses many of the same genes and signaling chemicals as the human brain, so studies of its system could have relevance to our own.

Now an MIT team has shown that even the simplest worm behaviors can be controlled by multiple signaling pathways. The results might have implications for the treatment of human brain disorders.

In the new study, published online this week in the journal Nature Neuroscience, H. Robert Horvitz and postdoctoral scientist Niels Ringstad investigated neural pathways of a mutant worm strain with defective egg-laying behavior. Horvitz, a Nobel laureate and Howard Hughes Medical Institute Investigator, is the David H. Koch Professor of Biology, a member of the McGovern Institute for Brain Research at MIT and affiliated with the Koch Institute for Integrative Cancer Research at MIT.

Normally, a hermaphrodite worm fertilizes its own eggs within the uterus and lays them steadily as they mature. In certain mutant strains, though, this process is blocked, causing the animals to bloat with 50 or more retained embryos.

A genetic screen for such mutants had earlier identified a gene called egl-6. Ringstad and Horvitz discovered that this gene encodes a member of a class of proteins known as G-protein coupled receptors (GPCRs). GPCRs allow cells to respond to hormones, neurotransmitters and other signals, and they are important targets for many human drugs.

Suspecting the existence of a second inhibitory pathway, the authors tested a variety of candidates. They found an effect when they also blocked signaling by acetylcholine, a well-known neurotransmitter in both worms and humans. Animals lacking both pathways became hyperactive egg layers.

"Inhibition of this simple behavior uses two neurochemical signals," said Ringstad. "It's like having two brakes in a car. We removed the footbrake, expecting the car to roll away, but we also had to disable the handbrake."

The results support an approach to drug discovery in the field of neuroscience, suggest the authors. If multiple pathways control a neural output so that either pathway is capable of inhibiting that output, then drugs that target just one pathway might have absolutely no effect. Instead, appropriate combinations of drugs will need to be identified.

The Life Sciences Research Foundation, The Medical Foundation and the National Institutes of Health supported this study.

A version of this article appeared in MIT Tech Talk on October 1, 2008 (download PDF).