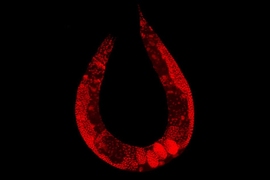 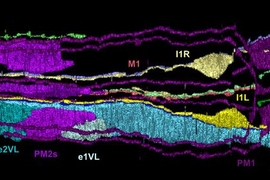 ↓ Download Image
Caption: A 3-D reconstruction from electron microscopy images of neurons and other cells in the anterior pharynx of C. elegans nematode. The M1 neuron, which controls the newly discovered spitting behavior, is located in the center.
Credits: Courtesy of the researchers

Caption:
A 3-D reconstruction from electron microscopy images of neurons and other cells in the anterior pharynx of C. elegans nematode. The M1 neuron, which controls the newly discovered spitting behavior, is located in the center.
Credits:
Courtesy of the researchers

Tasting and spitting out toxic food is a survival trait shared by many complex organisms. Now MIT researchers have shown that a simple roundworm, Caenorhabditis elegans, has the ability to spit out potentially deadly substances — a finding that could have surprising implications for human heart research.

To feed, the worm uses its pharynx, a myogenic muscular pump — which contracts without nervous-system stimulation — that rhythmically sucks bacteria into its intestine. In a paper published today in the journal Current Biology, the researchers identify three neural circuits — inside and outside the pharynx — that cause the worm to stop feeding and spit in the presence of light, which generates deadly hydrogen peroxide.

Identifying how neurons control the pharynx, the researchers say, could improve understanding of human myogenic muscles — such as the heart and stomach. Like the worm’s pharynx, the human heart, for instance, pumps substances through tubes, and relies on external neurons, from the brain, to control heart rate and other functions.

“All of these [myogenic] organs are under neural influence, and having established what’s likely happening in the worm might help us understand more about how nervous systems control our organs,” says Nikhil Bhatla, a postdoc in MIT’s Department of Biology and lead author of the paper.

Among other things, Bhatla says, the worm’s spitting behavior is reminiscent of valvular heart diseases, where blood is sometimes pumped in the wrong direction. “This opens the question, ‘Are there neurons in the heart that are detecting the levels of oxygen, or certain hormones, or other molecules, and controlling when the valves open and close?’” he says.

In a previous study, Bhatla and Horvitz discovered that the two molecular taste receptors GUR-3 and LITE-1 act in several neurons — including the pharyngeal I2 neuron — to control the worm’s response to hydrogen peroxide and other harmful reactive oxygen compounds produced by violet and ultraviolet light. In an effort to reduce exposure to the toxic chemicals, the worm inhibits feeding and avoids this light by moving away.

Building on that study, the researchers, in this new paper, recorded the worm’s feeding under prolonged exposure to light. In doing so, they discovered a “burst response,” in which the worm would stop feeding, but then start up again in a transient burst of activity. Zooming in, they noticed bubbles coming from the worm’s mouth during these burst responses.

To better capture this phenomenon, they attached a 1,000-frame-per-second camera to a microscope, and saw that the bubbles were, in fact, accompanied by spitting of ingested bacteria. Scientists know that other nematodes spit for other reasons — including parasitic worms that regurgitate substances into plants to liquefy the contents for digestion, and insect-killing nematodes that vomit pathogens into their victims. “But no one knew the simple C. elegans worm could spit,” Bhatla says. “It was completely unexpected.”

Normally, the worm sucks fluids into its pharynx, closes a muscular filter near its mouth, and pushes out unneeded liquids, while retaining the ingestible bacteria. But the researchers believe that when the worm tastes noxious chemicals, it never closes its filter. “And then everything just gets expelled right back out,” Bhatla says.

The heart of the matter

C. elegans has only 302 neurons — 20 of which are located in the pharynx. By comparison, the human brain is estimated to contain more than 80 billion neurons. The limited number of neurons in C. elegans has enabled all neural connections to be identified using electron microscopy, and mapped out in the worm’s connectome.

To identify the neurons that control food intake, the researchers killed all 20 pharyngeal neurons with a laser, and found that when the M1 neuron was eliminated, the worm stopped spitting — implicating this neuron in the control of spitting. Two other neural circuits, the researchers found — the I1 circuit and the previously identified I2 circuit — inhibit feeding when exposed to light by disrupting the pharynx’s pumping.

The researchers believe that the M1 neuron, which expresses the LITE-1 receptor, detects noxious chemicals and then holds the worm’s filter valve open to fully spit.

The results, Bhatla says, could indicate a new cause of aortic regurgitation, a heart condition in which oxygenated blood flows backward into the heart, instead of outward to the body; leading known causes are valve degeneration and endocarditis, an inflammation of the heart. But if neurons similar to the worm’s M1 exist in the human heart, Bhatla says, those neurons could be detecting harmful stimuli in the blood and telling the heart to keep valves open, perhaps to prevent the harmful substances from spreading.

“If this analogy is confirmed, novel therapeutics might provide an alternative to surgery to remedy valvular heart disease by inhibiting the function of such neurons,” the researchers write in their paper.

In another significant finding, the researchers discovered that light is indirectly detected outside the pharynx by RIP neurons, which relay signals to the pharyngeal I1 neurons to inhibit feeding. This circuit functions similarly to the human autonomic nervous system, where signals emerge from the brain and travel through the spinal cord to modulate heart rate, intestinal digestion, and other myogenic functions.

The next step is to further study this RIP-I1 signal, and track how other pharyngeal neurons interact with additional neurons in the worm, with hopes of shedding light on how human autonomic systems function. “The worm allows us to analyze how individual neurons interact in such fine detail that we might discover something fundamental about neural circuits in general … and that might tell us something about similar structures in other organisms, and about how such structures can malfunction in disease,” Bhatla says.

Chris Fang-Yen, an assistant professor of bioengineering and neuroscience at the University of Pennsylvania who was not involved in the research, calls the paper “very important work” in the field.

Discovering that the M1 neuron controls spitting, Fang-Yen says, solved two lingering mysteries from his own research into the worm’s feeding behavior. “Every cell we looked at was excitatory to pumping in the pharynx, with the one exception of the M1 neuron,” he says. “So I always wondered what the M1 neuron does, and what [controls] the filter valve — and those two mysteries happen to be the same thing.”

More research, he adds, is needed to determine if these findings can indeed shed light on human heart function. “But it’s fun to think about, for sure,” he says.