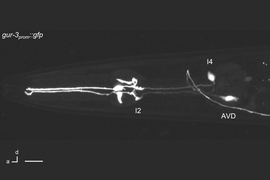 ↓ Download Image
Caption: This image shows where the GUR-3 protein is expressed in the worm, which includes the I2 neurons.
Credits: Image courtesy of the researchers

Caption:
This image shows where the GUR-3 protein is expressed in the worm, which includes the I2 neurons.
Credits:
Image courtesy of the researchers

“This is potentially a brand-new mechanism of sensing light,” says Nikhil Bhatla, the lead author of the paper and a postdoc in MIT’s Department of Biology. “All of the mechanisms of light detection we know about involve a chromophore — a small molecule that absorbs a photon and changes shape or transfers electrons. This seems to be the first example of behavioral light-sensing that requires the generation of a chemical in the process of detecting the light.”

Bhatla and Robert Horvitz, the David H. Koch Professor of Biology, describe the new hydrogen peroxide taste receptors in the Jan. 29 online issue of the journal Neuron. Though it is not yet known whether there is a human equivalent of this system, the researchers say their discovery lends support to the idea that there may be human taste receptors dedicated to flavors other than the five canonical ones — sweet, salty, bitter, sour, and savory. It also opens the possibility that humans might be able to sense light in ways that are fundamentally different from those known to act in vision.

“I think we have underestimated our biological abilities,” Bhatla says. “Aside from those five, there are other flavors, such as burnt. How do we taste something as burnt? Or what about spicy, or metallic, or smoky? There’s this whole new area that hasn’t really been explored.”

Beyond bitter and sweet

One of the major functions of the sense of taste is to determine whether something is safe, or advantageous, to eat. For humans and other animals, bitterness often serves as a warning of poison, while sweetness can help to identify foods that are rich in energy.

For worms, hydrogen peroxide can be harmful because it can cause extensive cellular trauma, including damaging proteins, DNA, and other molecules in the body. In fact, certain strains of bacteria produce hydrogen peroxide that can kill C. elegans after being eaten. Worms might also ingest hydrogen peroxide from the soil where they live.

Bhatla and Horvitz found that worms stop eating both when they taste hydrogen peroxide and when light shines on them — especially high-energy light, such as violet or ultraviolet. The authors found the exact same feeding response when worms were exposed to either hydrogen peroxide or light, which suggested to them that the same mechanism might be controlling responses to both stimuli.

Worms are known to be averse to light: Previous research by others has shown that they flee when light shines on them. Bhatla and Horvitz have now found that this escape response, like the feeding response to light, is likely caused by light’s generation of chemicals such as hydrogen peroxide.

The C. elegans worm has a very simple and thoroughly mapped nervous system consisting of 302 neurons, 20 of which are located in the pharynx, the feeding organ that ingests and grinds food. Bhatla found that one pair of pharyngeal neurons, known as the I2 neurons, controls the animal’s response to both light and hydrogen peroxide. A particular molecular receptor in that neuron, gustatory receptor 3 (GUR-3), and a molecularly similar receptor found in other neurons (LITE-1) are critical to the response. However, each receptor appears to function in a slightly different way.

GUR-3 detects hydrogen peroxide, whether it is found naturally in the environment or generated by light. There are many GUR-3 receptors in the I2 neuron, and through a mechanism that remains unknown, hydrogen peroxide stimulation of GUR-3 causes the pharynx to stop grinding. Another molecule called peroxiredoxin, an antioxidant, appears to help GUR-3 detect hydrogen peroxide.

Kenneth Miller of the Oklahoma Medical Research Foundation published a paper in 2008 describing LITE-1 and hypothesizing that it might work by detecting a chemical product of light interaction. “This paper goes one step beyond that and identifies molecules that LITE-1 could be sensing to identify the presence of light,” says Miller, who was not part of the new study. “I thought it was a fascinating look at the complex gustatory sensory mechanism for molecules like hydrogen peroxide.”

Not found in humans

The molecular family of receptors that includes GUR-3 and LITE-1 is specific to invertebrates, and is not found in humans. However, peroxiredoxin is found in humans, particularly in the eye, so the researchers suspect that peroxiredoxin might play a role in detecting reactive oxygen species generated by light in the eye.

The researchers are now trying to figure out the exact mechanism of hydrogen peroxide detection: For example, how exactly do these gustatory receptors detect reactive oxygen compounds? The researchers are also working to identify the neural circuit diagram that defines how the I2 neurons interact with other neurons to control the worms’ feeding behavior. Such neural circuit diagrams should provide insight into how the brains of worms, and people, generate behavior.